The phrase “owned vs earned” can sound a bit too jargony for those of you who aren’t that accustomed to the world of digital marketing, PR or social media, so let’s start by shedding a spot of light on their meaning.

Owned media – as the name itself suggests – is all about the channels/sites you’ve got full control of, such as your Twitter/Facebook page, your blog, website, online communities, and so on.

Earned media, on the other hand, consists of organic mentions of your brand on other websites, platforms, online communities and so on.

Basically, it’s all the buzz about your company.

The value of earned media often depends on how well you manage your owned media and also on the quality of your content, campaigns, events or PR efforts.

So is there a key ingredient in terms of both owned and earned media success?

A common mistake is either focusing too much on owned media – spending a lot of time sending tweets or sharing updates – and neglecting what’s going on externally, or, on the contrary, attempting to court engagement, comments, shares and so on without putting too much effort into your owned channels.

The best practice is undoubtedly striking a balance between both of them.

In most cases, the volume of conversation around your brand depends heavily on how active you are yourself.

This suggests that it’s not just quality, but genuinely quantity that can make an impact. So, does the more you do, the more you get principle rule here at least? Absolutely.

Another cool idea to put in practice if struggling with generating significant volumes of owned mentions is utilising your workforce to boost online activity.

As we’re a techy SMM company, we do have a genuine passion for social media. Therefore, luckily, a significant portion of our staff is active on Twitter, for instance.

To give you an example, our community team keeps an eye on owned mentions on Twitter, coming from all members of staff and also measures earned activity, to help benchmark market visibility.

You can take a look at the chart below to see how tight the relationship between owned and earned is, in our case: 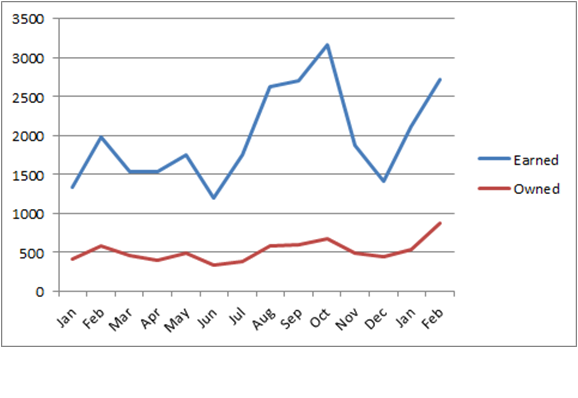 When Brandwatch Analytics was launched, in 2007, its core functionality was centered on monitoring earned mentions: everything being said about a brand, industry or keyword anywhere on the web.

Excitingly, at the start of 2013 and based on customer feedback, we launched a new feature: Channels. This feature allows users to analyse both earned and owned activity and compare them against each other.

Intuitively, you might ask yourself: why does it matter? Which metrics should I look at? How does it make a difference to my brand?

A great starting point would be looking at topic clouds, which illustrate the most popular themes of conversation within broadcast (owned), as well as that of your audience (earned).

This allows you to see whether your messaging is represented in the main topics people talk about, to observe how campaigns are perceived by your audience and also make sure you’re not missing any topics your community might be discussing.

Looking at the topic clouds above, one of the first things we notice is that there are plenty of similarities between the topics we discuss on Twitter and the ones most popular among our audience.

For instance, a key owned topic, Social Media Week in New York is reflected in the conversation about Brandwatch as well as by Brandwatch.

Additionally, one of last month’s most important highlights was the release of our Social Listening & Financial Services report and the launch of our Demographic Insights feature.

As illustrated above, both topics generated a lot of buzz both internally and externally, showing that our audience is listening and responding to the kind of topics we’re most interested in! Yey!

Another key factor we can assess the hashtags used by us, compared to our Twitter community’s favourites (data below is for March).

Again, these stats are showing us that two of the hashtags we’ve created, #brandwatch and #brandwatchtips have been adopted by our followers very quickly, which is always an excellent sign: our audience is active, engaging and highly responsive to our Twitter activity.

Similarly, SXSW was a recurring theme, but one story about Turkey hit much harder among our audience than we had anticipated. It’s these kinds of insights that can work to better optimise social content.

Monitoring owned and earned activity in one place can certainly help you evaluate more effectively how well you’re doing on social media (or at least how relevant you are) and the amount of effort you invest into your online presence can certainly impact your audience’s level of engagement.

As it’s already a trend for brands to have multiple owned media accounts and for customers to interact with them online; it can be incredibly useful to track and measure both earned and owned media and use those insights to build a highly efficient social media strategy.

We would love to see some of this kind of data from some of you guys – if you have Brandwatch access, let us know what the owned/earned relationship is like for your brand!