Who Was the Most Discussed Athlete of London 2012?

The Olympics are finally over, the wonderful global event that featured three weeks of endless sport, and what most are heralding as a huge success. Team GB placed higher than they have in over a century and the opening ceremony was praised the world over.

People took to Twitter and other social networks in their droves to comment on the athletes during the games, praising and, in some case cases, criticising the performances of the stars.

At Brandwatch, we have the capacity to listen to that online activity and make sense of what’s being said. We tracked over 540 athletes during the course of the Olympics to see which ones were being discussed each day.

Looking at social data spanning the entire Olympic period, from the 27th of July to the 12th of August, we’ve compiled the competing athletes into a rankings table, as listed by share of voice.

We know it’s all about the taking part, and that everyone’s a winner just for making it to the Olympics. However, we’re also super-competitive and want to make this even more of a contest than the Olympics already are.

Therefore, we’ve listed the top ten most talked-about members of Team GB, and have made a leaderboard, which you can see below. This is where the real glory is. 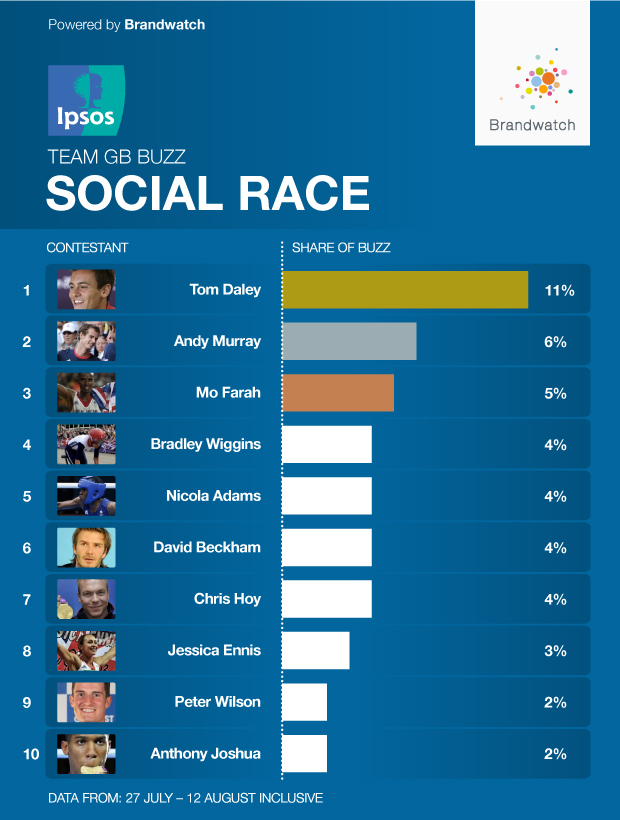 Controversy-friendly diver Tom Daley convincingly leads the table with a whopping 11% of the online Team GB mentions being about the 18-year-old.

The bronze-medallist courted lots of conversation around his bronze medal, yet even more so surrounding the media hype that resulted from this malicious tweet. Never far away from the limelight, Daley was a common discussion point for much of the Olympiad.

Next up on the list was Andy Murray, who just missed out on his first Grand Slam at Wimbledon, a tournament that ended just days before the Olympics began.

Returning to the lawn with a vengeance, Murray defeated his Wimbledon nemesis, Roger Federer, to win an Olympic Gold for Great Britain. This was all before teaming up with Laura Robson to earn the country a silver medal in the mixed doubles later that afternoon. 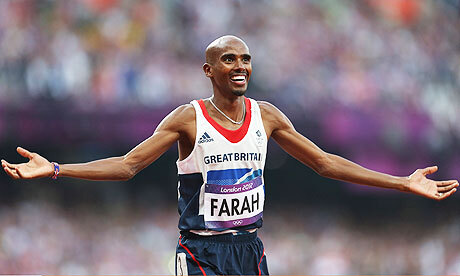 National hero Mo Farah picked up two golds for Team GB, the second just at the Games were coming to a close, ensuring him third place in the buzz rankings with 5% of the conversation.

Boxers Nicola Adams and Anthony Joshua both entered the record books as first female British boxing gold and Britain’s fifth boxing gold in a single Olympiad. These discussion points proved worthy enough to provoke the public into tweeting like mad, earning these two a place in the social media top ten.

The celebrated cyclists Sir Chris Hoy and Bradley Wiggins have also had a huge impact upon the social world, as their medal haul and general gentlemanliness means they were never far from people’s Facebook statuses. 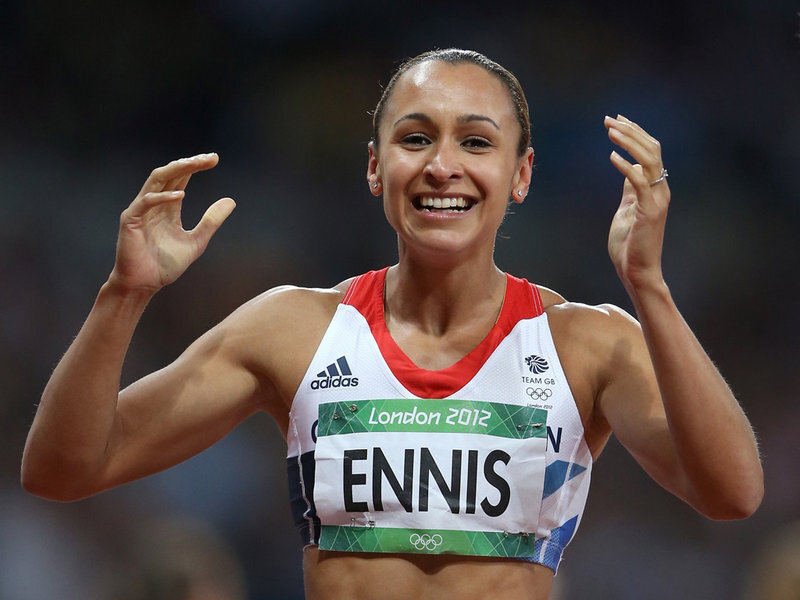 ‘Face of the Olympics’ Jessica Ennis was also of course a focus of conversation, with the emotional scenes after her Heptathlon gold propelling her into 8th place on our leaderboard, one place ahead of 25 year-old Peter Wilson, who finished first in the double trap shooting event.

Hold on. That’s only nine. Who else has made it into the leaderboard? Step forward David Beckham, the only non-athlete we decided to track has wormed his way into the top ten.

From joining in with the celebrations during the opening ceremony to being an all-round British ambassador throughout, and despite being snubbed by Team GB coach Stuart Pearce, old Golden Boots still caught the attention of the public, leaving him with 4% of the online conversation.

Which athletes do you think were the winners of the 2012 Games? We’re glad they were such a success, and we will continue to bring you analysis of all the biggest events that people are taking to social media to discuss.