Hate your job? Pack it up, pack it in – it’s time to head out West

Weston, Mass. – June 10, 2015 – Monster (NYSE: MWW), a global leader in connecting people to jobs, and Brandwatch, the leading social intelligence company, today announced the results of a year-long social media study of more than 1.1 million tweets in the United States analyzing exactly who, what, when, where and why people take to Twitter to discuss how they feel about their jobs.

“It’s certainly not just the weather nor differences in temperament that drove the disparity between people in the east hating their jobs and people in the west loving them,” said Joanie Courtney, Senior Vice President, Global Market Insights at Monster. “Job satisfaction is an often fluid, temporary sensation, and social channels deliver people the opportunity to express those sentiments with greater ease than ever before. The results indicate an opportunity for companies to focus on embracing existing talent to move the ‘love-hate needle,’ as well as those Tweeting to translate their skills for new opportunities to find something better.” 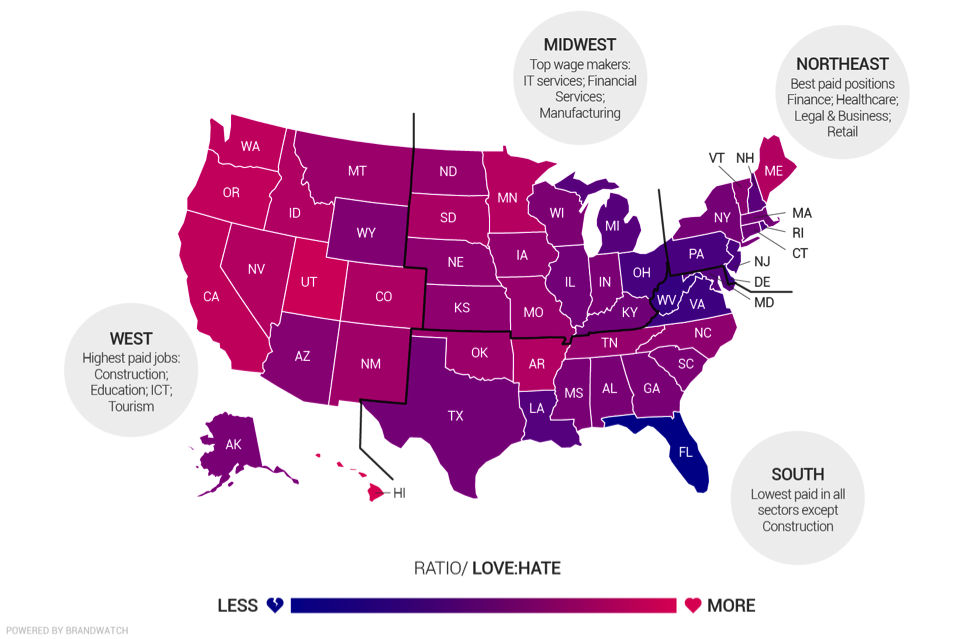 Location definitely matters when it comes to job satisfaction in the US. Eight out of the top 10 states where people tweet about loving their job at a higher ratio to hating their job are in the Western half of the country:

The top 10 states in which people on Twitter have a higher ratio of discussing hating their job vs loving their job are all exclusively in the Eastern half of the US, with approximately half of those job hating states in the Northeast region:

During this study, conducted March 2014-March 2015, Monster and Brandwatch also analyzed the days and months that showed the most conversations regarding job sentiment. In July, after the halfway point of the calendar year and when many people begin their summer vacation, positive Twitter conversations about loving jobs dips and steadily declines until another sharp drop in October, a time often seen as a crunch period for companies ramping up hiring for holiday sales or end-of-year deadlines. Once past the New Year, a more positive attitude returns and slowly makes its way to a peak in March. Interestingly conversations about hating their jobs also peak around this time.

“The ease and ability for people to publicly post their opinions via Twitter – from their latest meal to what’s happening on their subway ride – shows that everyone has a point of view. According to our analysis, sentiment toward jobs is no exception,” said Nate Walton, Director of Analytics, Brandwatch. “Although, this analysis revealed conversations about people loving their jobs dropping over the weekend, when it came to conversations around hating their job, there were no boundaries. We learned that if people hate their job enough to talk about it on social media, they hate it no matter the day of the week. An interesting finding from this study identifies that workers in certain industries are more prudent when posting about their jobs – with tech and IT employees avoiding much public Twitter chatter about hating their job.”

Over the course of the 12-month period, Monster and Brandwatch analyzed more than 1.1 million tweets in the United States using Brandwatch Analytics, searching for conversations that included languages and phrases indicating loving, or hating, their jobs. In-depth analysis within the study also utilized Monster data on the top skills and job titles in the US. For the full report, including details on the top jobs and job skills in each state, gender demographics of loving vs hating US jobs, and more, visit: http://www.monster.com/about/love-hate-job.

Monster Worldwide, Inc. (NYSE: MWW) is a global leader in connecting people to jobs, wherever they are. For more than 20 years, Monster has helped people improve their lives with better jobs, and employers find the best talent. Today, the company offers services in more than 40 countries, providing some of the broadest, most sophisticated job seeking, career management, recruitment and talent management capabilities. Monster continues its pioneering work of transforming the recruiting industry with advanced technology using intelligent digital, social and mobile solutions, including our flagship website monster.com® and a vast array of products and services. For more information visit monster.com/about.

Brandwatch is the world’s leading social intelligence company. Its social media listening and analytics technology platform gathers millions of online conversations every day and provides users with the tools to analyze them, empowering brands and agencies to make smarter, data-driven business decisions.

Acquiring social influencer analytics firm PeerIndex in December 2014, Brandwatch continues on its aggressive business trajectory following on its most recent round of venture funding to the tune of $22 million. The Brandwatch platform, ranked highest in customer satisfaction by G2Crowd in the Spring 2015 social media monitoring report, is used by over 1000 brands and agencies, including Cisco, Whole Foods, Whirlpool, British Airways, Sony Music, Papa John’s, and Dell.