There are thousands of food blogs online but only a few are successful. We use Brandwatch Audiences to find the cream of the influential food bloggers crop.

Running a food blog might sound like a nice idea, but creating a successful one takes hard work, dedication, personality and excellent presentation. That’s why while thousands of food blogs exist, only a few of the most influential food bloggers gain large followings, brand partnerships and a decent income.

In this blog post, we’ll introduce Twitter’s most influential food bloggers and explain a little about how identifying influencers in this way can work for you.

Using Brandwatch Audiences, we searched for individuals (not organizations) with “food blogger” in their Twitter bios. We found over 6,700 overall.

They were then ranked according to a selection of criteria that added together to create their influence score. This is a measure of how influential an account is over time, based on the level of genuine engagement they are creating. While lots of followers, retweets and replies will help, the more influential the people they engage with, the better the score.

The list we created had a number of common patterns. Many of those in the list identified as fans of travel and writing, as moms, and were primarily female. 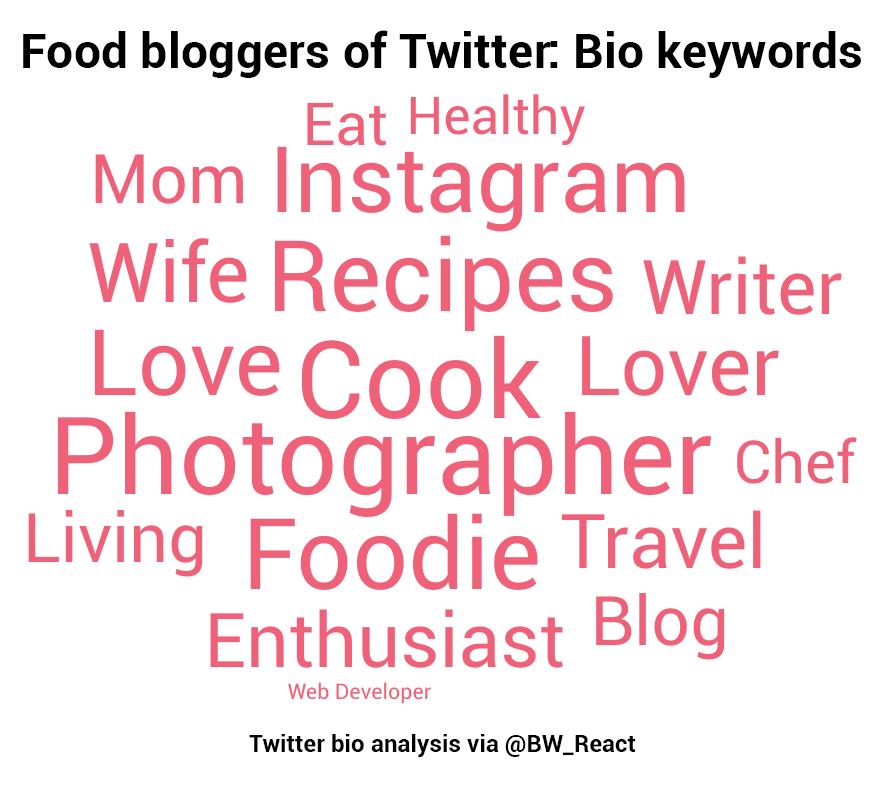 Among the top ten, we have food bloggers from a variety of places providing a variety of recipes and lifestyle advice. In some cases their blogs are also about travel or parenting, and in one case we have an influencer who’s most well known for their work outside of the food world.

Here are the accounts that scored highest.

@Mummyinatutu (or Kate, as we’ll call her here) is based in the UK and shares parenting and foodie content on her adorable blog.

Kate shares recipes including our favorite “67 toppings for your toast,” and is one of the most parenting-focused bloggers on our list.

Toni Dash began her blog after a food experiment that involved a winter of sourcing her protein and produce locally, and after growing a sizeable following the project widened in scope.

The Boulder Locavore blog now has a large selection of seasonal recipes and diets as well as content surrounding travel. It’s been featured in a number of big publications.

Kylee is a food lover who was born and raised in New Zealand and brought her talents to the USA.

Abeer is from Canada, but now lives in Toronto and she is a big fan of cakes.

Specialising in comfort food, not everything Cake Whiz shares on Twitter and blog is cake-related, but it’s all delicious looking!

Here’s an interesting account for you: As the Executive Director of Amnesty International in Ireland, O’Gorman isn’t necessarily influential on Twitter because of his food blogging. Instead, his food blog is a hobby and his tweets are mainly work-related.

You’re more likely to find his food content on Instagram and, of course, on his dedicated food blog. If you’re looking for a foodie with a big following that’s not solely dedicated to food, you’ve found your man.

NoshingWithTheNolands.com is a family blog focusing on cooking, baking and entertainment.

They share all sorts of great-looking recipes from their kitchen as well as helpful lists.

Grilled Lamb Chops w/Pistachio Mint Pesto is a gorgeous dish you can serve any time of year. So succulent and juicy! https://t.co/czTHFcVFcM pic.twitter.com/b5Au5XGy0T

Having survived a stroke in 2013, Eileen’s story is one of overcoming a difficult time and creating something really successful along the way.

She began documenting her recipes and encouraging indulgence in moderation on her blog and has built a loyal following in the process.

Originally from New Delhi, Molly now lives in California and shares her colorful recipes on her blog and social media feeds.

The scope of her cooking is really broad and she helps readers to cook everyday as well as more complex meals.

Stefani’s blog (mommyenterprises.com) is an interesting mix of parenting and food content.

@mommye has built up a huge following on Twitter and is very active, retweeting plenty of stuff that’s relevant to her readers.

Our most influential food blogger title goes to Tiffany Bendayan.

With a Culinary Arts Degree, Tiffany certainly knows what she’s talking about and a mix of clean design and personable posts has landed her with the top spot.

Brandwatch Audiences does much more than simply searching for bio keywords. Users can search Twitter profiles by gender, location, tweet content, interest, profession and more. Once you’ve created your customized list, the possibilities are endless.

While the most influential profiles will appear first, you might not care about how influential they are, just that they identify with your search terms. So, for example, if you were just looking for people interested in family/parenting you could take your list and use it to target those Twitter users with ads.

Or you could pull them into Brandwatch Analytics and find out what they’re talking about specifically. We did this in our recent food trends of 2017 blog post, in which we took 450 of the biggest food bloggers/vloggers and found out what diets and foods they were discussing. If you’re interested in learning more about your audience, you can do plenty within Audiences as well. By taking your audience into a dashboard you can compare it with another saved audience or just the Twitter average in terms of gender, interest, profession, location and bio keywords.

Influence score is often a factor when a user is looking for potential influencers to work with, whether it be to front their new campaign or promote their product via their blog or social media feeds.

So if you’re looking for more influential food bloggers or an entirely new set of authors altogether, why not give Brandwatch Audiences a go?

Want to know more? Learn more about Audiences. Ready to talk? Get a demo.