It’s All About The Moustache

November, that special month of the year when the men in your life put down their razors and start to grow moustaches in honor of men’s health issues.

November, that special month of the year when the men in your life put down their razors and start to grow their facial hair in honor of men’s health issues.

With this weekend marking the halfway point of the month, it means that the Movember and No-Shave November campaigns are half-grown.

Movember asks for donations to the Movember Foundation, which then donates the money it raises to projects and programs related to prostate cancer, testicular cancer, and other men’s health issues. Mo Bros, as the participants are called, agree to grow a moustache (no beards or goatees welcome) for the month of November.

Here at Brandwatch, we’re supporting the cause in a big way (just check out our Twitter pic takeover). We were intrigued by the similar but unconnected campaigns, and are tracking social media conversations to see how both campaigns are tracking on social. Since the beginning of the month we have been listening and analyzing Movember and No-Shave November discussions, let’s look at how they are talked about:

Both campaigns have a presence on social media, however, Movember mentions have had a larger share of voice on Twitter for the month so far:

Of note, this data is based on a 10% sampling of Twitter mentions found using the Brandwatch Analytics platform. The data numbers have been multiplied to represent the full volume.

Interestingly, both Movember and No-Shave November included mentions of each other in the top hashtags.

Many of the Movember top hashtags included competition-related ones such as #win, #competition, #giveaway, and #free. Gillette UK also made it into the top mentioned hashtags (#bestamancanget) with their giveaway of Manchester City goalkeeper Joe Hart’s signed gloves as part of the movement. 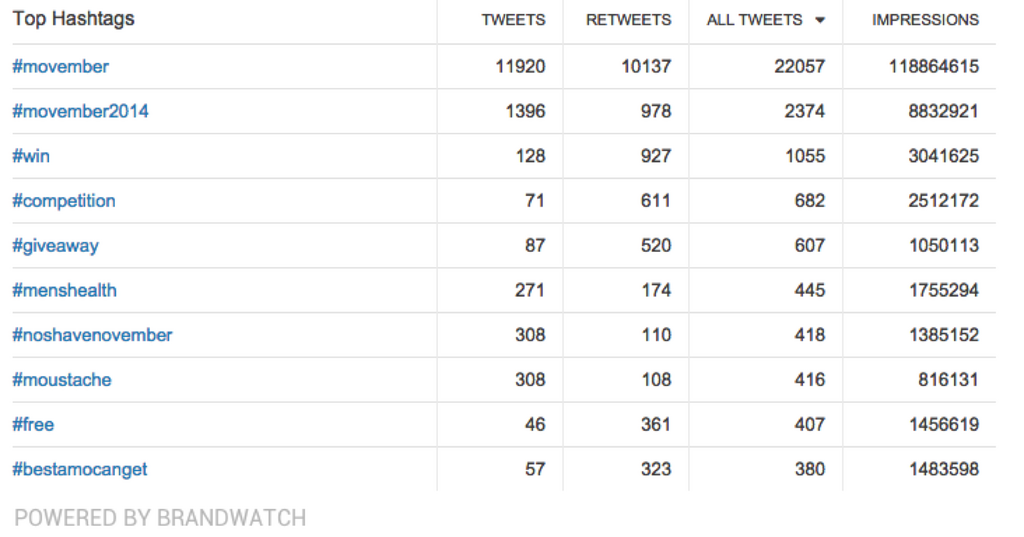 Don’t think these two are intertwined? The second most used hashtag in relation to No-Shave November is #Movember. Terms like #beard, #beards, #beardgang, and #letitgrow are also popular hashtags when discussing the initiative. While completely unrelated, No-Shave November wouldn’t be garnering as many conversations as it is without the side-by-side discussions of the more well-known campaign. 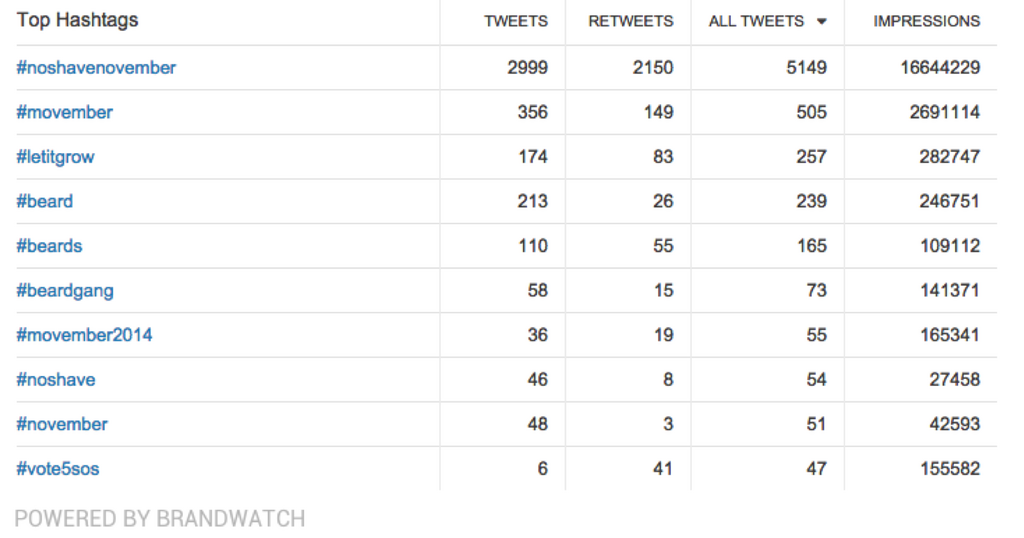 Both campaigns are discussed between men and women, however No-Shave November interestingly has a larger female presence (46%) than Movember (36%). This could be a result of the fact that No-Shave November encourages women to skip shaving, instead of growing a mustache or beard. 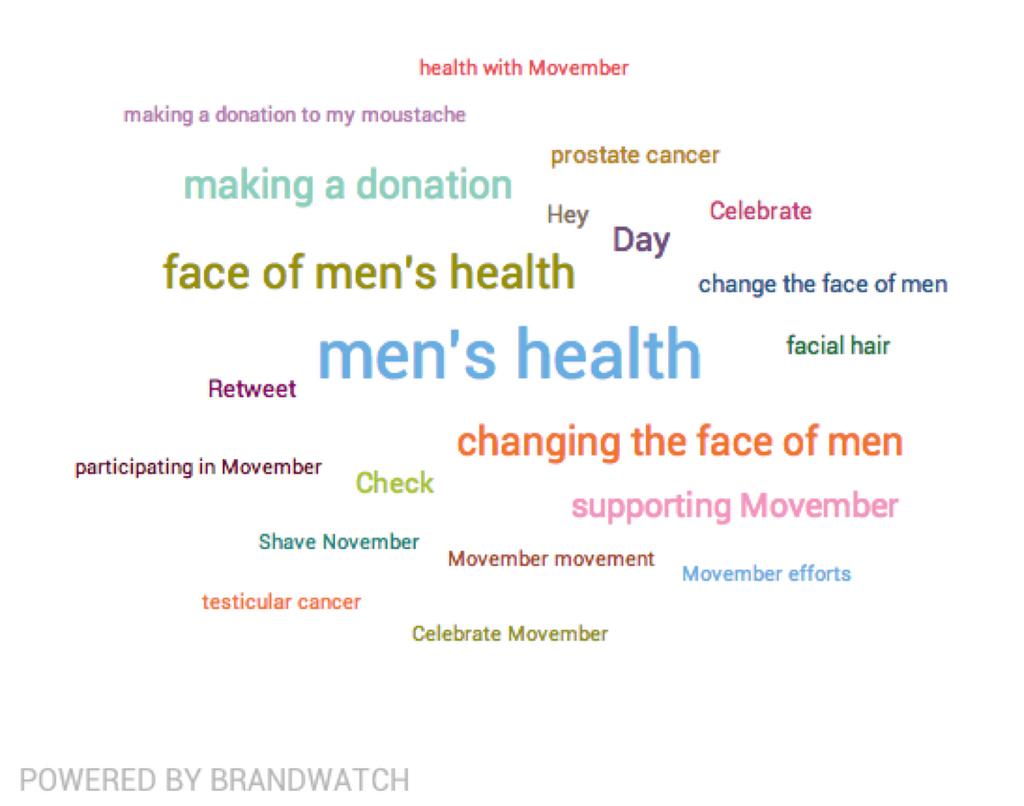 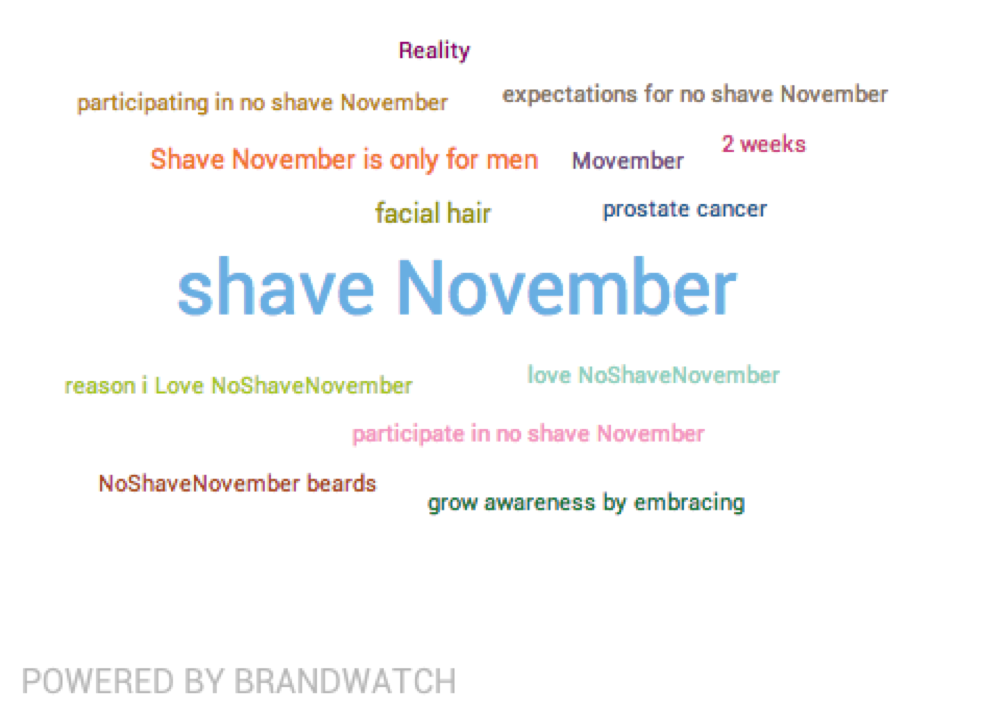 Check back at the end of the month for our final results! We plan on breaking down mentions of mustache, moustache, beard, goatee to see which facial hair style wins the social convo. And so much more.. Which campaign do you think will have the most mentions when it’s all said and grown?