New York Fashion Week (NYFW) is one of the world's biggest fashion events.

Held in February and September each year, the event celebrates international fashion collections, showcasing them to the world. NYFW is also a hotspot for celebrities, who are spotted attending runways for inspiration.

This year, September’s NYFW ran from September 9 – 14. Receiving over 1 million online mentions during the event, this year’s New York Fashion Week has been the most discussed since 2016. So, what got fans talking?

Dozens of designers used this year’s NYFW to showcase new collections on the runway. However, one single designer stole over half of the online mentions: Michael Kors. With 52% of the designer conversation about this fashion house, the brand generated an impressive conversation online. In second, with 41% of mentions, was fashion house Peter Do.

Both of these houses had something in common at this year’s New York Fashion Week. Michael Kors hired K-pop idol Dahyun to walk the runway. Dahyun is a member of the South Korean girl group Twice and has amassed over 6 million followers on Instagram. As a result, fans eagerly awaited Dahyun’s walk, generating over 100k mentions alone over the event. Unsurprisingly, 83% of sentiment-categorized mentions about Dahyun at NYFW were positive, as fans discussed their favorite celebrity online.

Peter Do did something similar, working with Jeno, a South Korean rapper, singer, dancer, actor, and member of the NCT boy group. Jeno’s runway debut got fans talking, with #jeno and #jenorunwaydebut trending throughout the night with 425k and 253k uses, respectively.

Jeno of @NCTsmtown is all smiles getting final touch-ups before opening the Peter Do #NYFW show. See more from backstage here. https://t.co/nAR1lCtSYi pic.twitter.com/0NbSibOpLx

Influencer marketing is an unrivaled way to drive online discussion about your brand. At NYFW, Michael Kors and Peter Do did this brilliantly, generating thousands of mentions about their collections on social media and bringing die-hard fans together to discuss their brands.

Celebrities are always a talking point at New York Fashion Week, and things were no different this September. Global Editorial Director of Vogue, Anna Wintour, was mentioned by many on social media as she sat front row during the Michael Kors runway. 87% of emotion-categorized mentions about Anna at NYFW were joyful, as fans were excited to see the legendary fashion icon.

Anne Hathaway also earned a top spot in the conversation, sitting next to Anna Wintour at the show. Anne wore an outfit similar to her character in the film The Devil Wears Prada, which generated plenty of excitement on social media. In fact, a single tweet about the outfit received an impressive 140k likes.

How does this year’s New York Fashion Week compare?

This September’s NYFW received more online mentions than any other NYFW since September 2016 – and by quite a large percentage. Day 5 was the most discussed period, with over 400k mentions on this day alone. This was the day Jeno opened the runway with Peter Do. 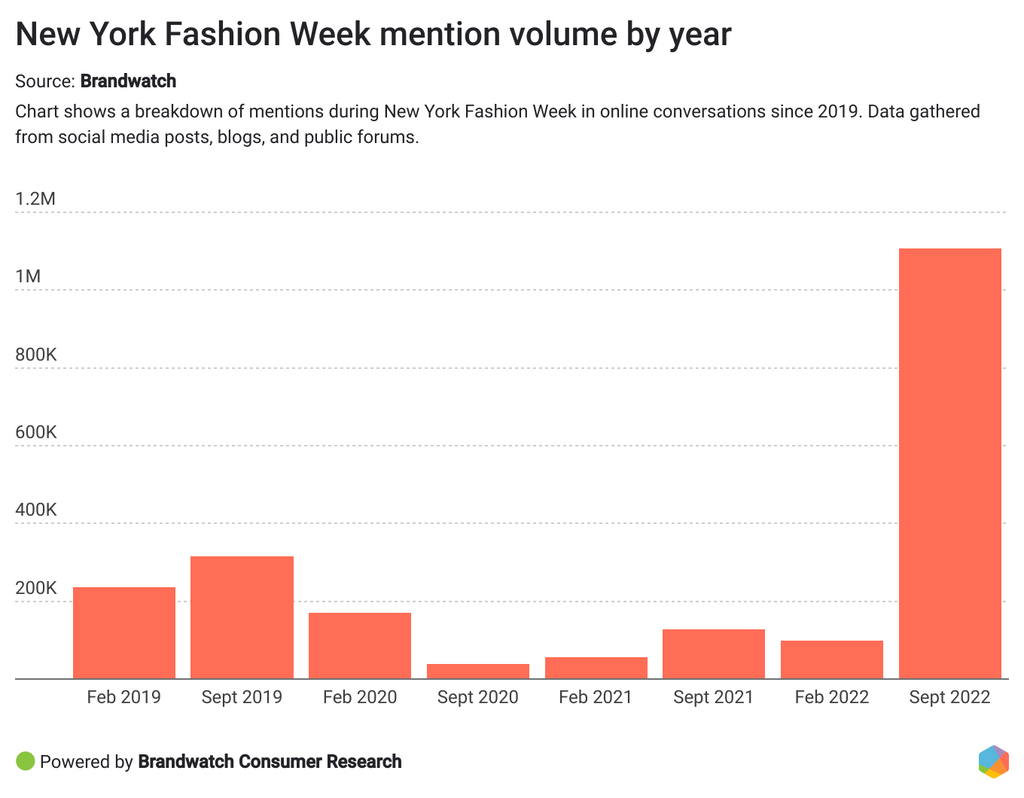 The response to 2022’s September NYFW was largely positive, with 77% of emotion-categorized mentions of the event being joyful. Fans were excited to see their favorite celebrities at the event and explore the new collections of their most-watched fashion houses.

The second most prevalent emotion was sadness, with 14% of emotion-categorized mentions. Mentions under this category show disappointment with not being at NYFW or not being invited to go. A minority were also unimpressed about this year’s collections.

As with most live events like New York Fashion Week, there’s always a buzzing conversation happening online. Brands might benefit from offering coverage of real-time events to gain exposure in a widely publicized conversation.

Plus, influencer marketing is bigger than ever. By utilizing influencers who offer an engaged fanbase, brands can increase the impact of their campaigns with a much larger audience.