Today in the UK it is Red Nose Day and everyone is being encouraged to ‘Do something funny for money’.

The day, set up by charity Comic Relief, is used to raise money for children in the UK and Africa and sees people across the UK donning silly outfits, taking part in dares and taking vows of silence in order to ‘do their bit’.

There has been a ton of conversation online about Red Nose Day in the run up to the big day; we’ve found over 45,000 online comments about what people are getting up to since Monday and it’s not even lunchtime yet!

So, what’s dominating that conversation? Stories of local bake sales? The charitable work the money will fund? The plight of homeless children or those with Malaria?

Well, no. It’s, er, One Direction. You know, that boy band. More than a third (a massive 36%) of red nose day chat mentions the boyband.

Just to put that into perspective, in comparison only 1.5% conversation mentioned the Harlem Shake and 1.7% mentioned dressing up (one of the most traditional/common fundraising activities!)

Love them or hate them, to their credit, One Direction fans – as much as they may grate on those of us who have to put up with them on Twitter – are doing a good job of promoting the fundraising efforts of their idols. If that means more money raised for Comic Relief, then we suppose we’re happy to put up with their near-hysterical tweeting for a week.

The band (well, their PR agency) have done a big PR push, with a visit to Africa and a charity single, complete with ‘homemade’ music video:

And it seems to be working; their fans are doing an incredible job of dominating every area of the conversation.

The band and several of its members’ names feature in the topic cloud showing common phrases and words used within Red Nose Day conversation. The terms ‘rednoseday single’ and ‘visited Africa’ are also related to the boys. 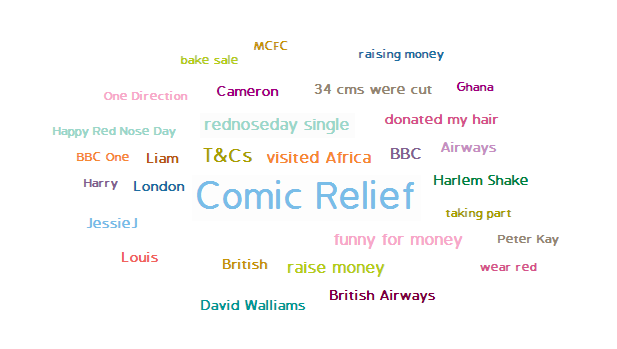 Other celebs, such as Jessie J, David Walliams and Peter Kay also make it into cloud for their participation in fundraising event, whilst the crew of British Airways also got a look in due to them getting in the spirit and dressing up for the day. The Harlem Shake also makes an appearance, of course.

Using our new Twitter Insights component, we can see that One Direction are also dominating Twitter conversation, in every way.

The iTunes page to buy One Direction’s cover of One Way or Another was the most tweeted link within conversation, with nearly 4,500 tweets and retweets.

The band’s official account was also the second most mentioned tweeter, with over 9,000 tweets mentioning @onedirection, only topped by the official Red Nose Day account, @rednoseday, which was mentioned in over 21,000 tweets. The boys also take four more of the top 10 spots with their personal accounts.

Their promotional hashtag, #1d4rnd was also the most used hashtag, beating #rednoseday and #comicrelief

We were going to analyse what people were doing to fundraise around the country, but all the ‘normal’ people’s own discussion about their own fundraising activities is drowned out by One Directioners fervently supporting the boys. Sorry about that, blame the celebrity culture.

There are some who aren’t getting One Direction fever though, nor even into the Red nose Day spirit in fact. Here’s our favourite example:

Not quite charitable eh? Whatever you’re getting up to today, whether it be buying One Direction’s single, dressing up like a clown or slamming your face against a wall, we hope you have a great day.