The React team went out last night and now we're feeling grotty. So we turned our hangovers into a data analysis in an attempt to get through the day.

I awoke suddenly at 6 am this morning with an overwhelming urge for sugary, sugary fruit juice, a large Domino’s pizza and to stand under a healing waterfall, if such a thing exists.

It could only mean one thing. The hangover fairy had been, and today would be a struggle. 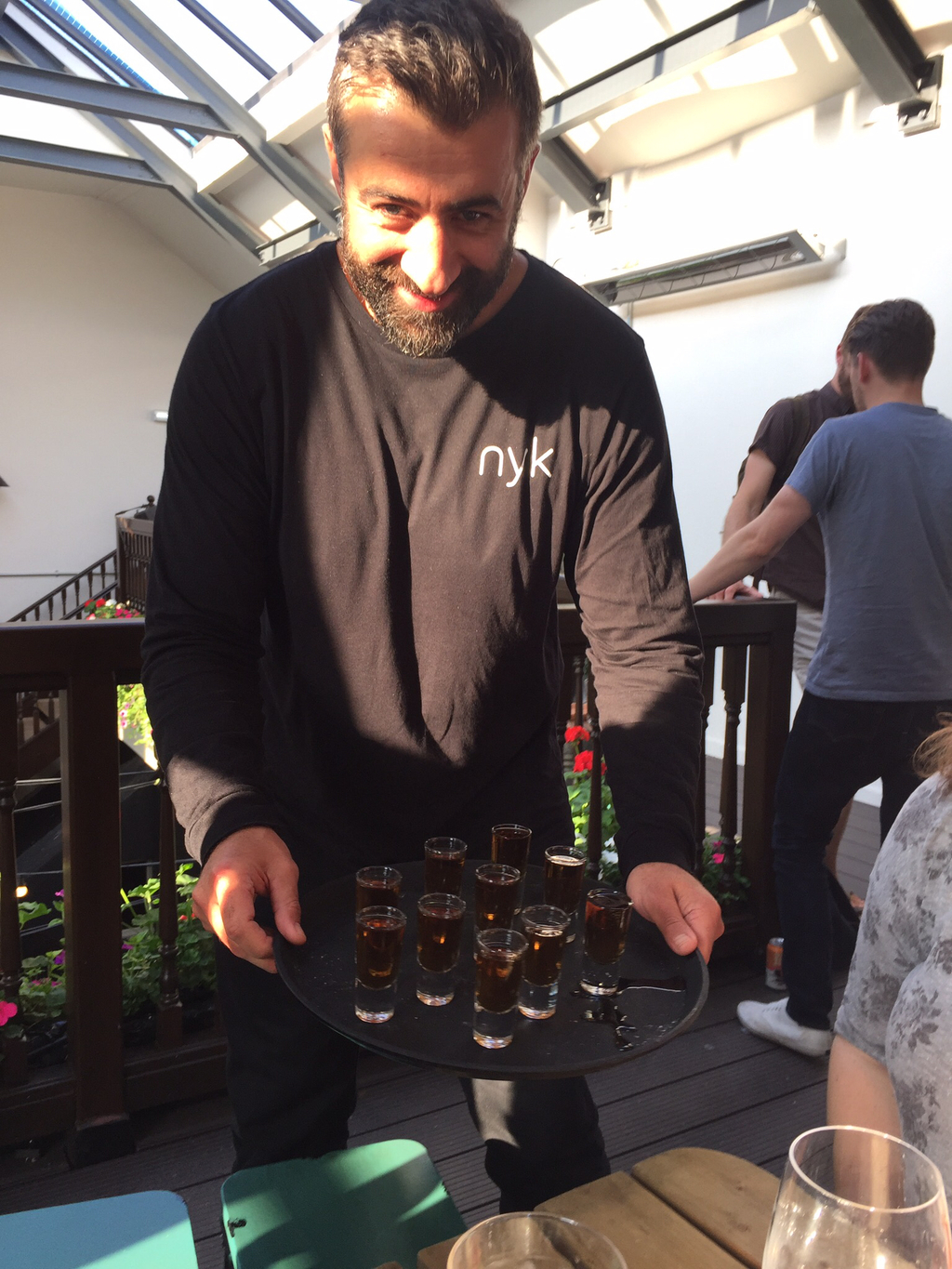 Brandwatchers across Brighton (the home of Brandwatch HQ) were stirring, bleary eyed and feeling existential. A post-company meeting celebration had seemed like a great idea twelve hours ago. Friday-style drinks on a Tuesday night – what could possibly go wrong?

Look how happy we were. Now the Tuaca grin of our CMO Will McInnes is merely a memory.

Making our way to the office this morning, the Brandwatch React team weren’t feeling too pretty. Amid the knowing nods to colleagues with their heads in their hands, an unjustified annoyance at the non-drinkers and fresh faced people who didn’t go out last night and a grateful trip to the communal fridge for hangover supplies, we had an idea.

Today we would find out which day is the most hungover day of the year and how other people deal with hangovers, using social data.

If you’re hungover and reading this, don’t worry. There are no triggering references to alcohol below this point.

This project is what Unlimited Historical Data was made for.

After writing our hangover query (mentions of “I’m” or “I am” or “im” near “hungover”, excluding RTs, Twitter only), three years of historical tweets were quickly backfilled. Our data focused on 1 February 2015 – 25 July 2017, in which we found nearly 750,000 hangover cases.

We were then able to look at those mentions over time, by day of the week and time of day.

The least productive day of the week

Sunday is absolutely the most hungover day of the week (and not just because January 1st was a Sunday this year – we tried out this data excluding that date and it looked the same).

Tuesday and Wednesday appear to be the least hungover days, while Friday was third from the top. 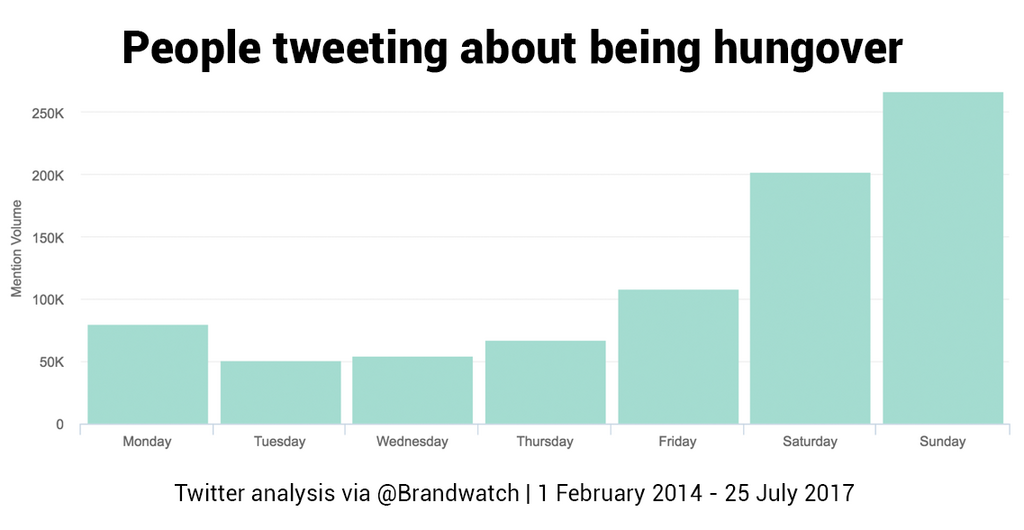 The most hungover time of day

There are many stages to a hangover – the initial sting as you raise your head from the pillow, the slow shower in which you assure yourself it’s only temporary, the mid-morning crash and the tentative nibbles on a slice of disappointing toast. But everyone experiences them differently.

We decided to look at how hangovers peaked by time of day, and zoomed in on New York to take a look.

11am is definitely the peak – if you’re reading this at 12, you’re likely over the hump. 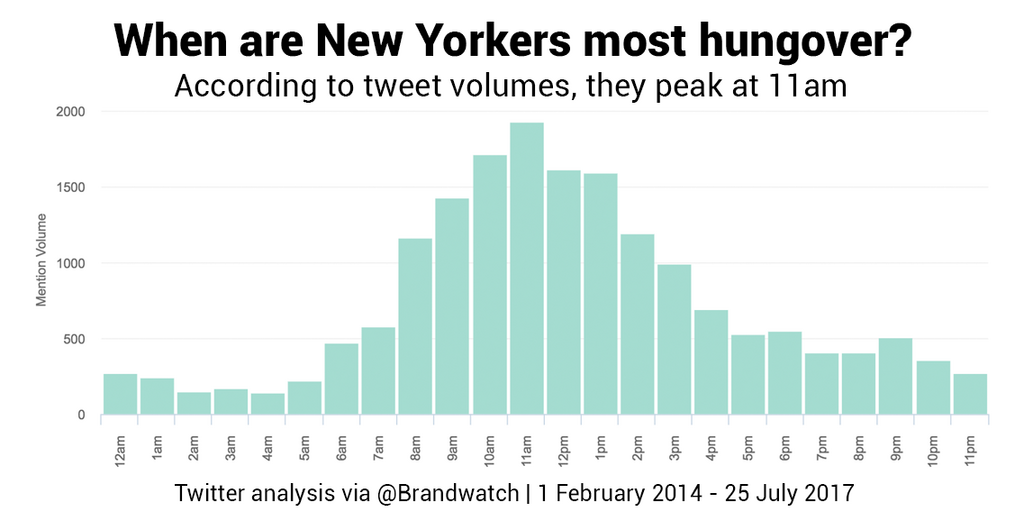 We also took a look at London hangovers to see if there were any differences. Again, they peaked at 11am, but Londoners’ suffering is more concentrated around the middle of the day whereas New York is more evenly spread.

Unfortunately, there weren’t enough mentions from Brighton to do a full chart, but examining the ones above have reminded me that there’s a long, long day ahead.

Let’s not dwell here too long.

Five Cool Things You Can Do With Unlimited Historical Data

The most hungover days of the year

We thought we’d take a look at the last year to see when the most people were hungover. It yielded some interesting results – some expected, some surprising. 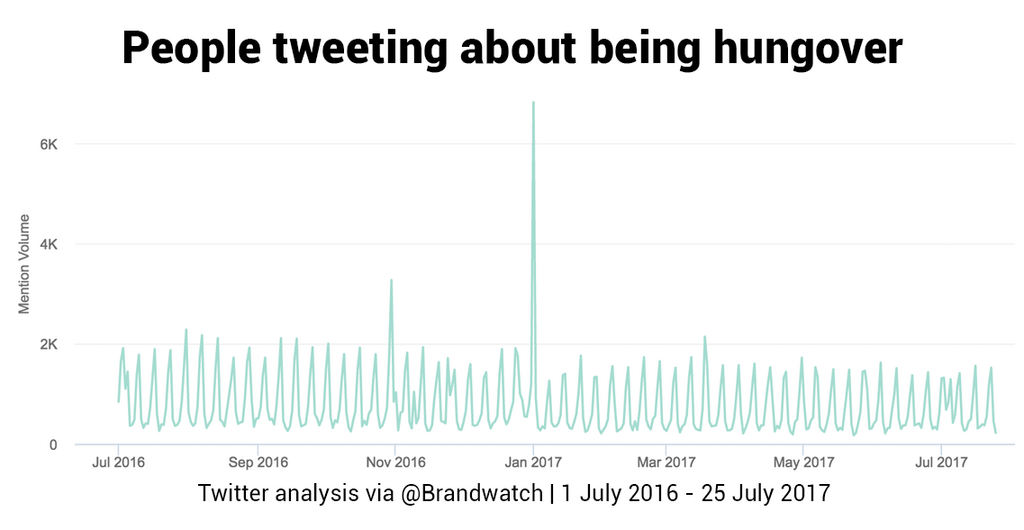 It’s the clear and obvious winner, with a spike as big as the NYE bar tab.

The 30th of October

People were partying big time on the 29th of October last year, prompting our second biggest hangover mention spike. We’re thinking this is likely Halloween related, although there wasn’t much explanation within the data.

While this spike was more hotly contested, 7th August took third place in the most hungover day of the last year competition.

Why? We’re not sure. It was Pride weekend in Brighton (which we’re sure contributed a few mentions!)

All the data you need to cure a hangover

(This is an update to our original article). Once word got around about a hangover post on the Brandwatch blog, we received an interesting message from our friend Chris McCormick who had used Brandwatch to find out about hangovers before. His research focused on remedies and reactions, and on taking a look at the dashboard I knew it had to go in.

When we looked at potential remedies for a hangover, there were four standout themes being mentioned: 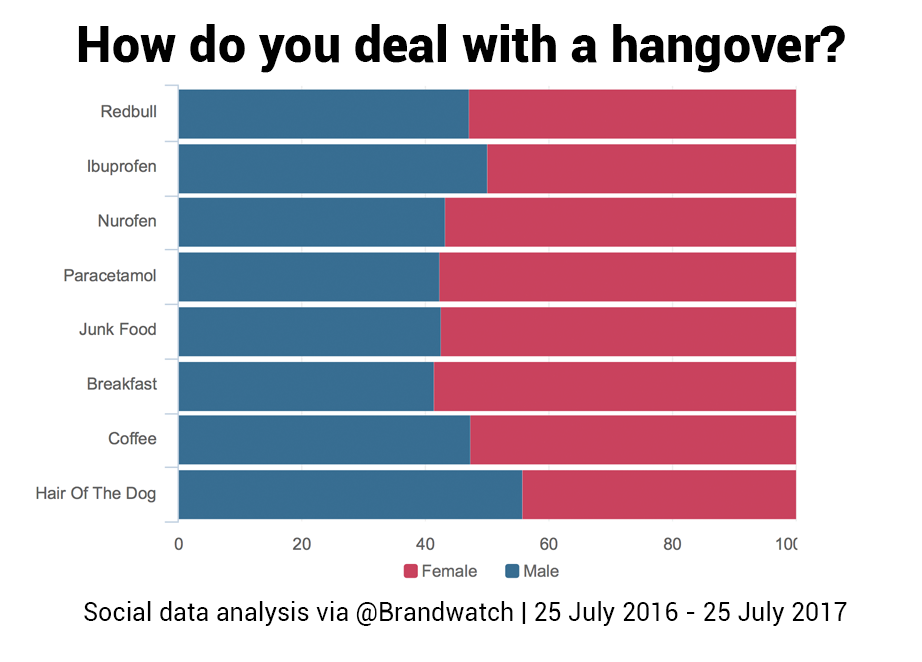 That’s what you need. We also broke all the potential remedies down by gender to see if there were any notable differences. While women are more keen for breakfasts than men, men are more likely than women to try ‘hair of the dog’. As the hungover writer of this post, and as a female, hair of the dog sounds like the worst idea possible. Just saying.

Chris had also broken down reactions to different kinds of alcoholic drink. Here’s a table containing the most common reactions for each of the beverages we studied.

I did something productive this morning.

And now you know when people are most hungover and how to cure your hangover. Thanks for going on this journey with me.

Thank you to Capri Sun and the prospect of a halloumi sandwich from the café over the road for getting me through this analysis.