The world needs light hearted stories at the moment. That’s why one of the biggest trends on social this week saw people rally around Super Mario’s nipples.

The revelation came when Nintendo released a bunch of announcements from the upcoming game Super Mario Odyssey, the sixth top-mentioned game at E3 this year, with shots featuring a shirtless Mario frolicking on the beach.

Mario’s nipples have never been seen before, and they caused quite the stir.

We tracked 27,250 mentions of Mario alongside terms like “shirtless”, “topless” or “nipples” etc. over the 13th and 14th of August when the hype was its strongest.

Mentions peaked at around 4,000 per hour when the news spread around social around 6pm ET on Wednesday. 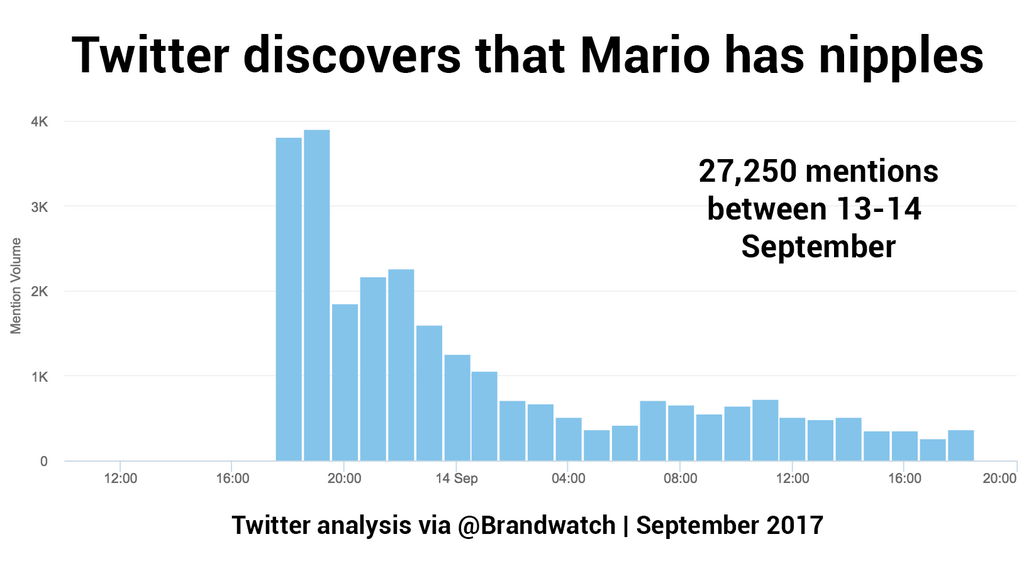 The conversation was one of surprise – the nipple revelation challenged what people had previously thought about Mario. Many expressed surprise at his lack of chest hair. 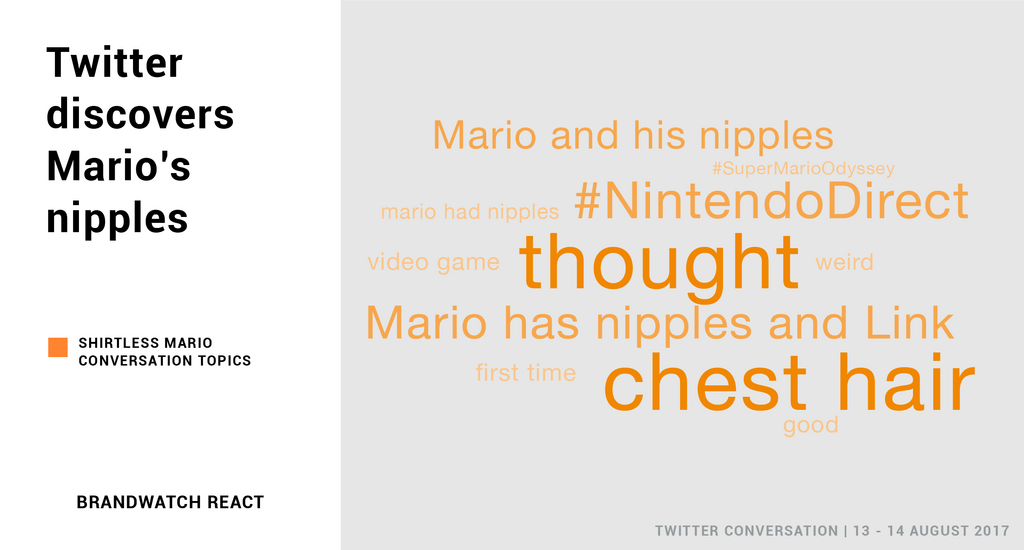 #NintendoDirect, a platform on which Nintendo makes announcements and the place where the nipples were first seen, made up a sizeable chunk.

The gender breakdown, perhaps surprisingly, was as follows: 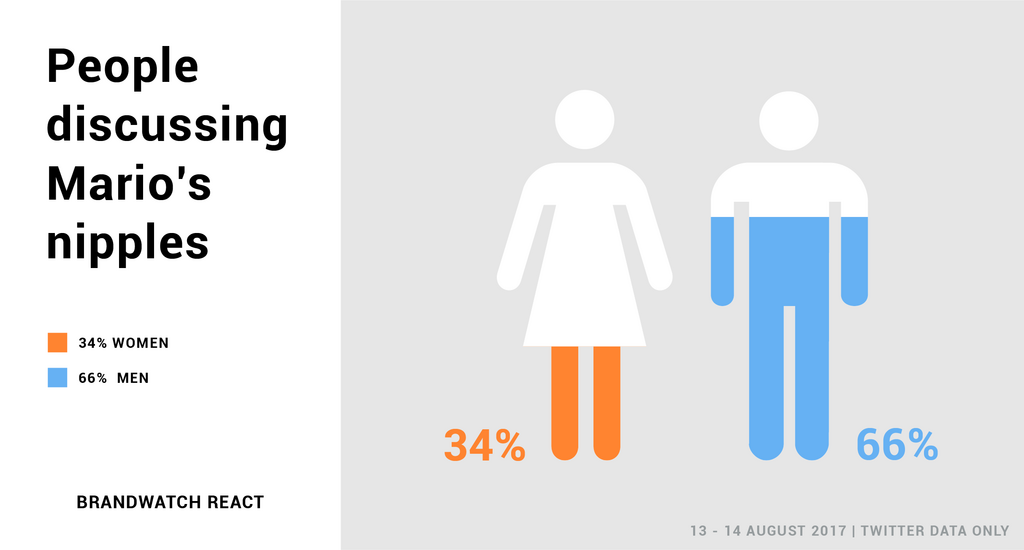 Getting into some of the verbatum questions Mario’s nipples bought up, there are some fairly fascinating notes.

For example, nipples aren’t necessarily compulsory on all Nintendo’s human-like characters. Based on Link’s anatomy one might have reasonably assumed Mario would live sans-nipple also. How wrong we were.

2017 is the year we learned that canonically Mario has nipples and Link doesn’t pic.twitter.com/cz47qXAtva

And it wasn’t just his nipples that made people think. The tattoo on his arm, visible in a previous ad, is no longer there! Maybe it was a temporary tattoo.

You mean It's not canon anymore ??!? pic.twitter.com/2hO1nrKBEa

Some speculated that the changes in Mario’s life – leaving his profession as a plumber and showing off his beach body – were signs that Nintendo might be leading up to an even more shocking revelation. Only time will tell.

Reveal 1: Mario is no longer a plumber
Reveal 2: Mario has nipples (no chest hair)

I'm just wondering what Nintendo are working up to here

Samit Sarkar of Polygon had some sensible input.

dear everyone tweeting about shirtless Mario and his nipples: like, it'd be weird if he DIDN'T have nipples, right?

But, of course, there was no shortage of WTF mentions.

*mario squirts his nipple milk into your coffee* mama Mia!

Moving on swiftly… This is a Mario game for 2017

Beyond a refreshing stance on #FreeTheNipple, Nintendo’s new Mario game has some funky features that cater to a 2017 audience.

Back in the day, you’d plug a chunky cartridge into your NES and sit with a horribly uncomfortable controller as close to the TV as possible, navigating a 2D Mario through a familiar world of mushrooms and pipes.

That’s not to say it was an unpleasant experience – it was great fun! But Super Mario Odyssey is definitely a game for today’s hyper-connected, social media dependent world.

Not only is Mario now shiny and 3D, he seems to have moved on with his life. He might still be trying to win back Princess Peach from Bowser (who is apparently marrying her…?) but he’s no longer a plumber, and he’s travelling the world with little regard for what people think of his beach bod. Good for you, Mario.

Nintendo have created a varied set of playing spaces for gamers to explore, and it’ll be interesting to see how Mario interacts with his new environments. Also, they’ve introduced a vertical screenshot mode where players can share their Mario shots on his adventures with friends on their smartphones.

Super Mario Odyssey was crafted with image sharing in mind. That’s why Mario does adorable things, can take on an assortment of shapes and will explore an array of vast worlds. We want to share our favorite moments from games with others online … and Super Mario Odyssey’s Snapshot Mode is proof that even developers and publishers like Nintendo are taking note of the way our gameplay styles are changing.

If you’re a journalist and are interested in receiving updates on the data, email us at [email protected] to be added to our E3 morning briefing list.