The Brandwatch React team shares their analysis on the latest Apple Event data. Find out how the iPhone X and other announcements went down on social.

Tim Cook and friends took to the stage in the Steve Jobs Theater yesterday to announce Apple’s latest offerings – offerings he hoped that Steve would be proud of.

Amongst them were the iPhone 8, the hotly anticipated (and leaky) iPhone X, the Apple Watch Series 3 and 4K Apple TV.

Apple Events are always a huge deal on social media – we know, we’ve tracked a few of them. So the Brandwatch React team couldn’t wait to share our latest Apple Event data.

We searched for mentions of Apple Event (or #AppleEvent or the word Apple or iPhone near “announce”, “present”, “keynote” etc) across social media during the live stream. What did we find? 438,449 mentions between 10am and 12pm PDT. Nice job Timmy C.

Of those many thousands, here are the highlights along the way.

It was interesting to see the smaller details and products make splashes – for example, the fact that Apple has taken over Rolex to become the world’s “top watch”, or the Air Power charging pad that reduces the number of annoying wires and plugs that continually toil the multi-Apple product wielding person. It’s a hard life.

The products on show

The pacing of this Apple Event meant that each major product had its time to shine. We took a look at mentions of each of the major announcements.

Unsurprisingly, iPhone X (or “iPhone 10”) came out on top. This phone is billed by Apple as the future of smartphones. Second, predictably, was the iPhone 8.

We should note that the non-existent iPhone 9 got a solid 3,207 mentions. 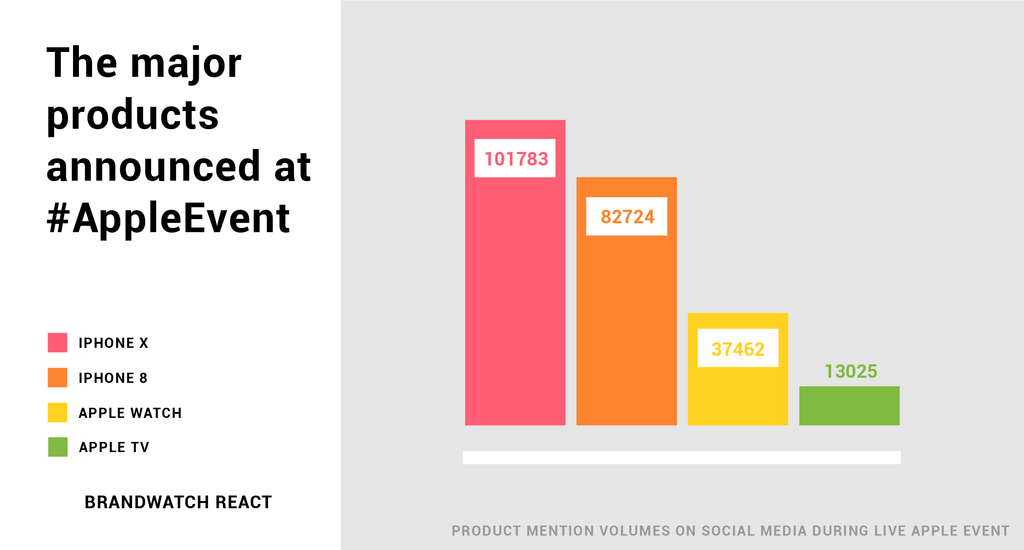 The Apple Watch Series 3 conversation was dominated by the revelation that the watches would have cellular built in. An impressive live demonstration with a woman named Diedre trying not to fall off a paddle boat on a lake while chatting on her Apple Watch gave this part of the event particular flair.

Apple TV wasn’t hugely successful in rallying support on social compared to the other products, but that’s not to say the presentation wasn’t incredibly shiny.

The first segment of the Apple Event was dedicated to Apple’s physical spaces – namely the new Apple Park in which the Steve Jobs Theater was built, as well as Apple’s physical stores. Wait, not stores. “Town Squares.”

While the reaction was a little cringey, the Town Square model is a bold move. As e-commerce continues to create a cheaper and more convenient alternative for retailers and consumers, Apple are investing deeply in customer experience in physical locations.

An authentic, personal (and dare I say Instagrammable) experience is what millennials are said to be crying out for, and that appears to be what Apple is going for. Apple will also be opening up a visitor centre at the multi-billion dollar Apple Park shortly.

Death of the Mall: Retail Brands Must Update Aging Approaches To Customer Experience

This blog post wouldn’t be complete without a brief discussion of Animojis. While not a major product, we tracked nearly 10,000 mentions of the announcement in the two hour slot.

Animojis allow users to animate their favorite emojis using their own faces, sending stills or videos in messages.

They finally did it.

Apple turned you into a talking piece of shit#AppleEvent

When you think about it it’s not really that inventive, but as my attention began to turn to the upcoming episode of Bake Off it was animojis that won me back. I’m not sure if that says more about Apple’s incredible new feature or me.