A Social Data Exploration of Netflix’s Gilmore Girls: A Year in the Life

The Brandwatch React team takes a look at the people talking about the latest season of Gilmore Girls online, 10 years after the last season aired.

The caffeine addicted, pizza loving, not-sure-who’s-the-parent-in-this-relationship-is duo are back with their lovable pals (including a short appearance from the now actually famous Melissa McCarthy as Sookie). Netflix treats fans to a four-part series that covers the spring, summer, autumn and winter in the lives of Rory and Lorelai.

Ten years since season 7 first aired on TV, Netflix snapped up warm, fuzzy hit Gilmore Girls and gave season 8 to an audience living in very different times. Teenagers who started watching the show identifying with awkward brainbox Rory might now be in a very different place in their lives, where perhaps Lorelai is an easier figure to empathize with. Did the risk pay off? We took a spoiler free look at the data.

Searching for mentions of “Gilmore Girls” and related hashtags across social media, the Brandwatch React team wanted to explore how an audience in 2016 would react to a show first released in the year 2000.

The hype machine started months ago, and it definitely paid off. The series got hundreds of thousands of online mentions over the opening weekend and between November 13th and December 6th 3% contained variants of the term “binge”. 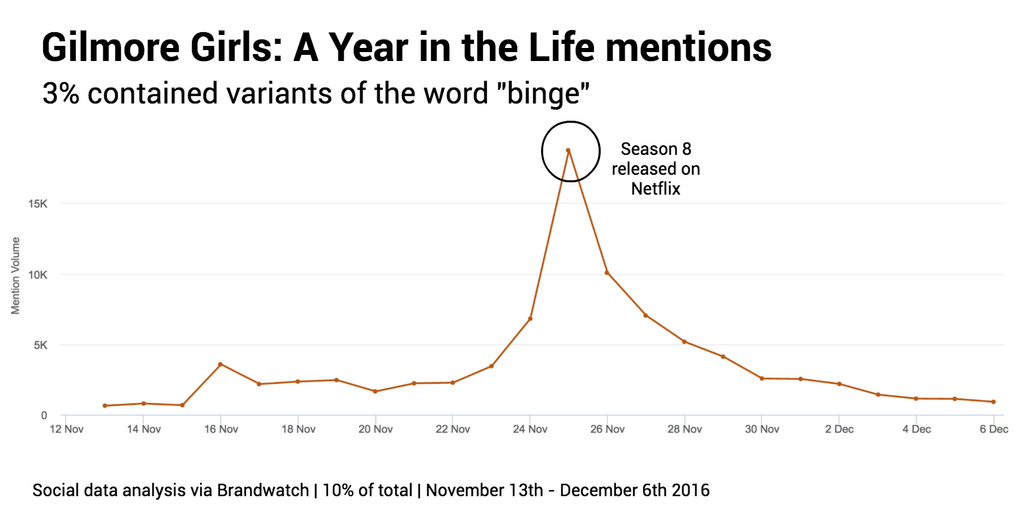 The majority of conversation came from the US and the UK, but Brazil also offered a significant chunk of mentions as watchers marked off the episodes they had watched in tweet form. The fan base is truly global.

Monitoring emotion towards the series is a little complicated. Firstly, the love is clear – there is absolutely no shortage of people talking about how much they love the Gilmore Girls. However, measuring how many people hate Gilmore Girls or are angry about the Gilmore Girls gets complicated in an enormous dataset when you have people discussing the show like this:

I hate how the new Gilmore girls season only got 4 episodes and left it ending with a cliffhanger ?

Multiple petitions have been set up to try to convince Netflix to bring the show back. They want more, but whether or not Netflix will want to (or be able to afford to) agree to the demand remains to be seen.

Rory Gilmore took more mentions than any other character during the opening weekend (we measured this time frame to see the initial reaction and not later speculation). 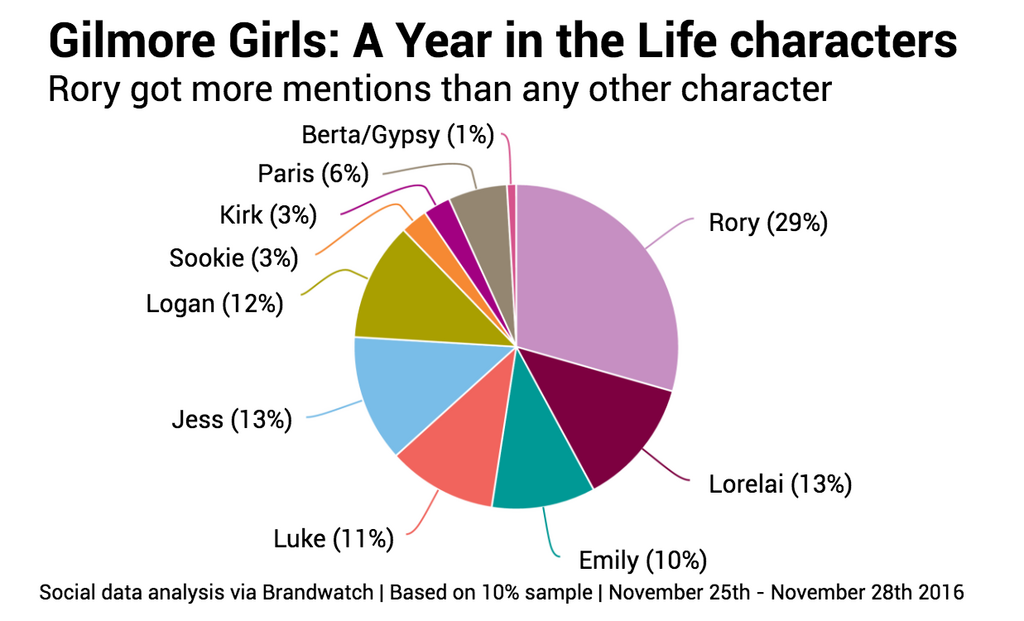 Rory is an interesting character in that while some love her, she does appear to get more hate than any of the other people on the show. Her choices surrounding her relationships and career have been brought into question by a number of damning articles and the claws are definitely out when it comes to criticizing her on Twitter.

While she may once have been considered a model student, in the adult world she’s not exactly a role model anymore. But, if Gilmore Girls is meant to make people feel better about their lives and their own sometimes imperfect decisions it’s certainly doing a good job.

Unsurprisingly, we found that those talking about Gilmore Girls online were overwhelmingly female. Looking at gender-categorized tweets, 80% came from female authors. 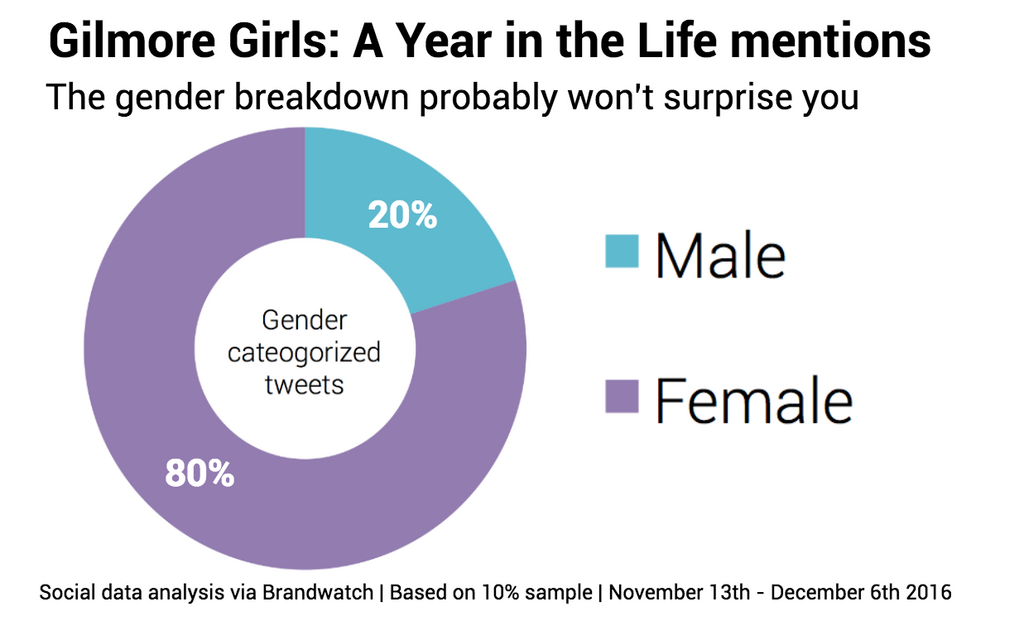 We also found that books, music and food and drinks were the most prominent interests to many of the authors, while family and parenting came fourth – perhaps this would have looked different in 2000 when the show started – but Twitter didn’t exist then…

Brands and celebrities jumping aboard

Gilmore Girls is famous for being full of pop culture references, so famous faces of the day who scored a mention were definitely happy and got involved on Twitter.

Being referenced in the new Gilmore Girls cured every ailment I've ever had ??? I love you Stars Hollow!

.@vulture I would love her!

Though not exactly pop culture, the “corpse flower” reference was taken up by the fast-fingered marketing team at the New York Botanical Garden, earning them some decent media coverage.

Not saying the mention in the @GilmoreGirls trailer convinced our corpse flower to come out of its shell.

Not NOT saying it, though.

You may have seen #LastFourWords flying around Twitter and it’s a hugely prominent hashtag/set of words in the conversation. You’ve probably guessed that these refer to the end of the season and I won’t say what they mean (because, frankly, I haven’t actually seen the end), but you can definitely expect to be on the edge of your seat if you’ve not watched yet.

With thanks to Cynthia Zanirrati who is new to our Professional Services team and conducted much of this research out of love for the Gilmore Girls.