No business is immune to crises. There are an infinite amount of ways for things to go wrong. You may run a tight ship, but all it takes is one employee to embroil your entire business in a huge scandal.

We’ve just released a crisis management guide that will help you become an expert in the area. It explains the whole process from preventative measures to analyzing the aftermath.

To complement the guide, we’ve put together a list of six specific essentials to make sure, whatever the crisis, you can deal with it effectively.

1. A clear and organized team

A structured team with set roles for everyone is important. This stops confusion taking hold from the off and keeps everyone on their own task. Work isn’t doubled up on and you can be agile and swift in your response.

The main aim is that once something goes wrong everyone knows what they need to do without being told. You won’t have time to form a team on the spot, so do it in advance.

2. A prepared and trained spokesperson

Speaking of set roles, you need to choose someone who will be your spokesperson. Hopefully you’ll never need them, but if someone needs to be interviewed by the press, you have to make sure they’re capable.

How we perceive a message is heavily influenced by the person delivering it. They could be telling the entire truth, but if their voice is shakey or they look nervous, we instantly doubt what’s coming out of their mouth.

Consider running some drills with them beforehand, question them and prod them about a fake crisis and see how they handle it. It might even be worth it to invest in some public speaking lessons. Very few people are naturally good at facing a hostile press.

Whether it’s a poorly fact-checked press release or a well-meaning but badly phrased tweet, someone acting on their own can quickly make things much worse. Hence the need for sign-off.

Make sure everyone knows who has the final okay on communications related to the crisis (or even all communications depending on the case). Not only does someone have ultimately responsibility and control, but it means you get more than one pair of eyes on any messaging.

Usually in a crisis you need to tread carefully with communications. Rushing out a public-facing press release can easily go wrong. Often you can take a bit of time before putting out a detailed response to the world.

But for other stakeholders, be they suppliers, investors, or major clients, you may need to be quicker in reassuring them about what’s going on. There’s nothing worse than dealing with an angry public and jittery investors at the same time.

Put together a list of all the people who will need to be contacted as soon as possible in the case of a problem. Think about the best person internally to contact them and make sure they’re included in all discussions around the crisis. You should even prep your tone and plans for making amends for the problem.

According to an ODM study, 65% of respondents think social media makes a crisis worse. But 55% think it makes a crisis easier to deal with after. And that pretty much sums it up.

Information, correct or incorrect, spreads like lightning through social media. This can make make things difficult to control, which is why the guide suggests setting up monitoring in advance.

Make sure you know what to do with social when a crisis happens. Usually holding back on posting and reviewing any scheduled posts are a good start. But you also have to think about how you to reply to any messages from customers and the public.

Social media platforms are a double-edged sword in a crisis. Make sure you use them properly and keep them under control.

Finally, organization-wide panic is a perfect way to make everything go horribly wrong. Usually, with a plan and all of the above sorted, you can avoid anyone going off message.

Either way, it’s a good idea to get your crisis team to meet regularly, refresh your plans, and keep everyone reassured. Make sure everyone knows the right procedures and the sign off structure so that everything goes as it should.

Dealing with a crisis is never easy but, with the right set up in place, things can run much more smoothly. 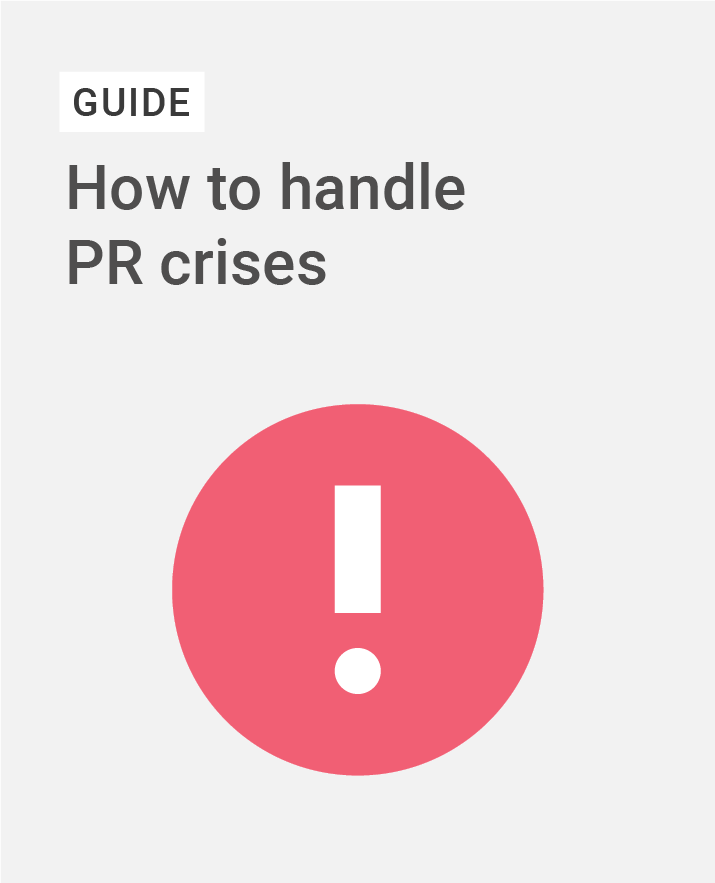