React: All the Social Data on Wimbledon 2016

Wimbledon is in full swing and we’ve taken a look at some of the data surrounding the world famous tennis tournament.

As one of the biggest tennis events of the year, Wimbledon is big business.

With a winning prize of £28.1m ( around $37m), high profile attendees and big name sponsors, there’s a lavish atmosphere which is about more than sweaty tennis players battling it out on court.

We decided to take a look at the players making a splash and how much attention the official suppliers are getting on social.

Social media has been busy reacting to the drama on and off court, and we’ve tracked up to 200k mentions per day. The response has been truly global, with commenters from all over the world talking about the players, sponsors and attendees. We tracked mentions of the most referred to male and female players from the 27th of June to the 4th of July.

There wasn’t any real correlation between the player’s world ranking and their number of mentions, though there are certainly some familiar names at the top. Serena Williams and Andy Murray are absolutely killing the competition on mentions across social media, but the top 10 male players got far more mentions overall than the top 10 female players. 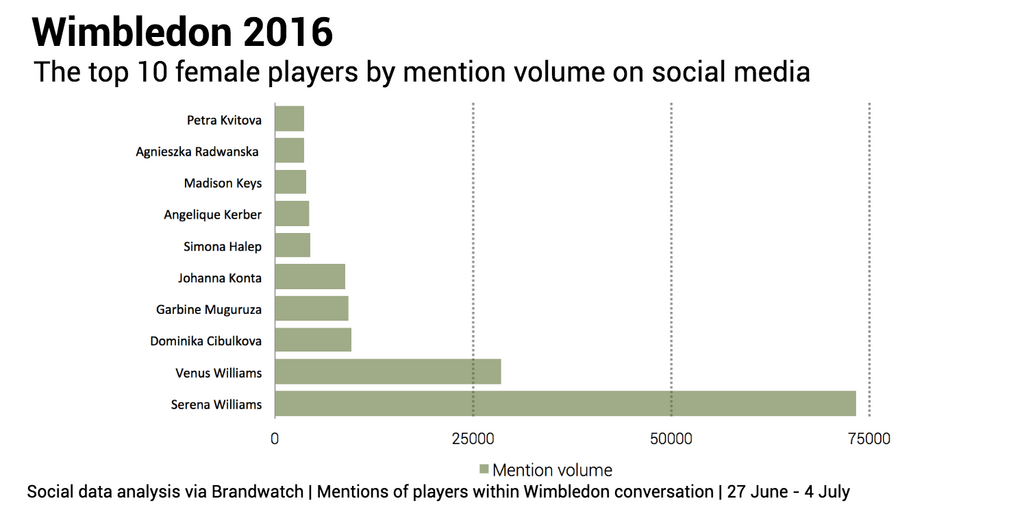 Firstly, take a look at the top mentioned words used by news outlets. The word London is heavily used by non-UK press to specify the location, which is why it has such a prominent place in the topic cloud. The prominence of Marcus Willis and Sam Querrey is much stronger in the Twitter cloud, which is interesting because both players have been perceived as underdogs in the contest who have triumphed over higher ranking players.

2016 the year of Underdogs.
Djokovic is knocked out by Querrey at Wimbledon.
Can you believe this could happen??? o_O

Everyone loves an underdog, it seems.

Djokovic’s shock loss also stung a lot more on Twitter, right at the centre of the topic cloud.

Perhaps another interesting difference is the gender breakdown of player mentions across the platforms.

Female players play a more prominent part in the news outlet mentions than in the Twitter topic cloud.

Finally in our comparison, while news outlets weren’t so easily swayed, Twitter fell victim to the One Direction effect with mentions of Niall Horan nearing the center of the crowd.

Twitter Moments even got involved in the 1D hype.

We tracked mentions of the official suppliers since the beginning of the 2016 tournament to see which were gaining the most attention.

There are a fair few, with everything from an official ball to an official champagne, car and outfitter.

Some have an incredible history, with Slazenger the official provider of tennis balls to the tournament since 1902. 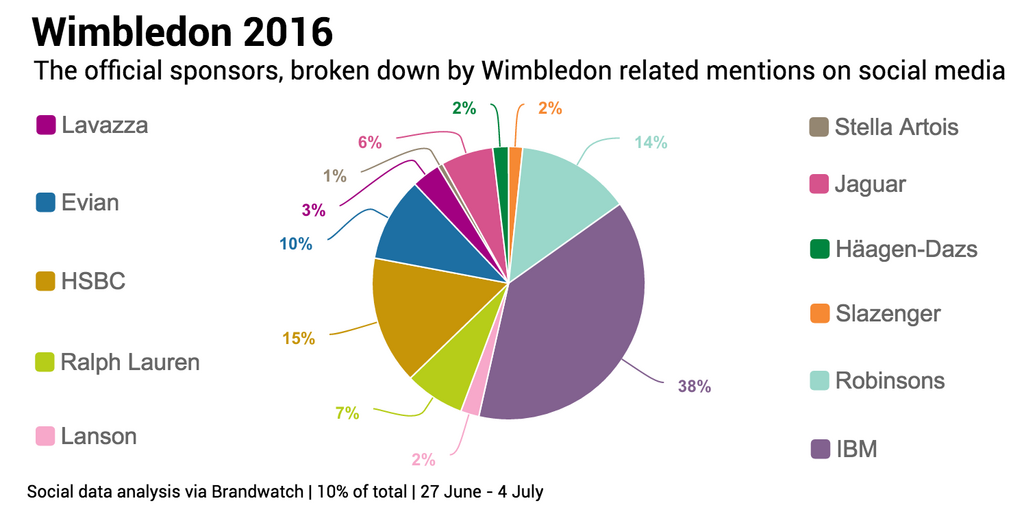 Breaking down the conversation by looking at mentions of each sponsor, we found IBM raking in the most.

There’s all sorts of commentary going on online but we’d certainly recommend following to official Wimbledon Twitter account for updates and brilliant quotes from the players.

Are you a journalist looking to cover our data? Email us [email protected]