Why Ryanair’s Social Media ‘Fail’ is Not Such a Disaster

You may have noticed a certain Daily Mail article yesterday about ‘mother’ Suzy McLeod, who was angry about being charged £236 by ‘no frills’ airline Ryanair to print out her boarding passes, which she had not done herself as required prior to check in on a flight from Alicante to Bristol.

The Daily Mail published the story the day after several marketing/social media blogs picked up on the airline’s ‘social media fail’ when McLeod’s complaint on Facebook attracted support in the form of hundreds of thousands of ‘Likes’.

What some articles failed to notice though, in their rush to out yet another brand for an apparent ‘failure’ in their use of social media, was the tone of conversation surrounding the complaint.

It is true that the Facebook complaint, which was posted on what looks to be an unofficial Ryanair page, received over 20,000 comments (and counting) and currently has over 416,000 likes.  However, some manual analysis of those comments shows that just 26% were sympathetic towards the complainant, with 44% unsympathetic and even at times extremely critical of McLeod. A quick look at the ‘Best Voted’ comments on the Daily Mail article shows a similar mood. Plus, the value and actual impact of ‘Likes’ on Facebook is oft debated, due to users’ apparent ‘click happy’ mentality when it comes to ‘Like’ buttons. 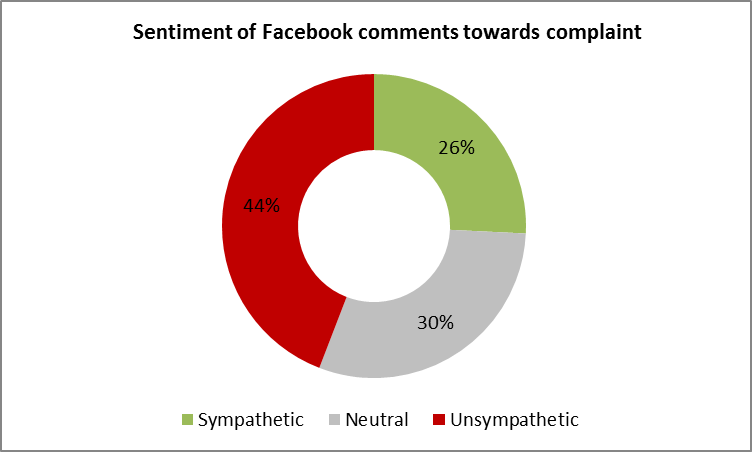 Many, despite at times agreeing that Ryanair’s policies or service were poor, pointed out that the charges were in the terms and conditions and it was therefore McLeod’s own fault, with comments along these lines ranging from: “So someone can’t read then goes on the web to bitch about it being someone else’s fault. You agreed to the T&Cs when you booked then failed to follow the instructions provided. It’s your fault that you are ignorant or stupid not Ryanairs.” to the slightly more dismissive and offensive: “Shut the fuck up and stop bitchin, shit happens!”

Despite the news articles, online conversation levels in the UK about Ryanair did not rise significantly yesterday, though the topic did dominate conversation, as shown by the word cloud below.

The vast majority of this conversation took place on Twitter, though tweets about the story tended to just link to various news articles, without passing opinion, and were therefore neutral, whilst 22% were unsympathetic towards McLeod.

Ryanair have stayed relatively quiet throughout the furore – not ideal, though criticising them for not replying to a comment made on an unofficial Facebook page seems somewhat unfair. A spokesman has reiterated that the charge is made clear in the small print, but other than that Ryanair has remained seemingly unfazed.

Whilst we may ooo and ah about the negative publicity Ryanair are receiving due to this complaint, chances are the budget airline are not particularly bothered. They have little social media presence as it is, and CEO Michael O’Leary is famed for his ‘all publicity is good publicity’ stance – and they are certainly getting that.

Plus, this latest ‘scandal’ – one in a long line of recent bad press – arguably will have little impact on Ryanair’s reputation on social media, as it is already quite poor: our data shows that sentiment  towards Ryanair on UK social media (for the month of July) was 48% negative, with just 6% positive of chat about the airline. 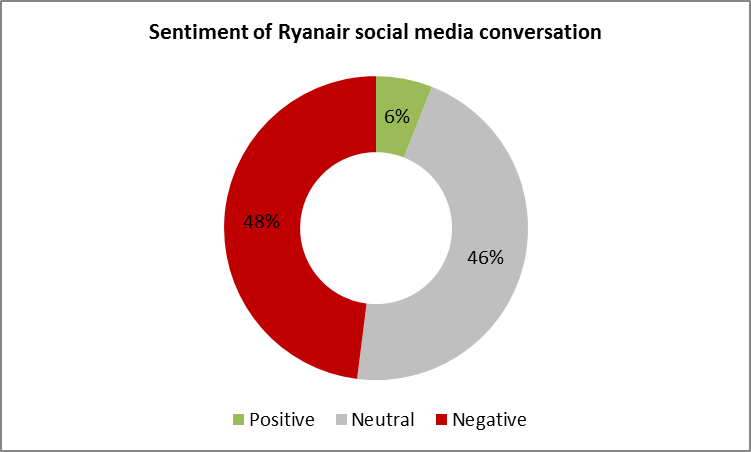 This is demonstrated well in the comments on the original Facebook post. Within those, there was a detectable feeling expressed among many commenters (even those that were unsympathetic to the complaint) that Ryanair are ‘rubbish’, ‘what do you expect’ and so on, with 43% of Facebook comments on the original post stating some form of negative opinion towards Ryanair.

So, chances are that this ‘fail’ will pass as quickly as it arrived, and Ryanair will continue to be loved and hated for what they do best – no frills flights.