What your peers are paying for ads on social media, from CPC to CPM.

If you work with social or digital marketing, you’ve probably wondered if you’re paying the right amount for each click or impression.

So have we. That’s why we’ve decided to pull data from 15 different sources to find out what the average cost of ads is on Facebook, Instagram, Twitter, and LinkedIn.

We’ll break down benchmarks for what a typical advertiser should expect to pay per click and per 1,000 impressions on each of the major social networks this year.

What goes into determining your social media ad cost?

While this info should help give you a ballpark estimate of what a reasonable bid might look like, you should make sure to keep it in context.

After all, since ad sales on each of these social platforms are based on auctions and targeting options, there are a ton of factors that determine exactly what an ad will cost you.

To give you a sense, here are a few of the variables that can raise or lower the price of your ads on Facebook, Instagram, Twitter, and LinkedIn:

So for example, if you work in finance, you can expect to pay a higher cost per click on Facebook than if you’re selling clothes: 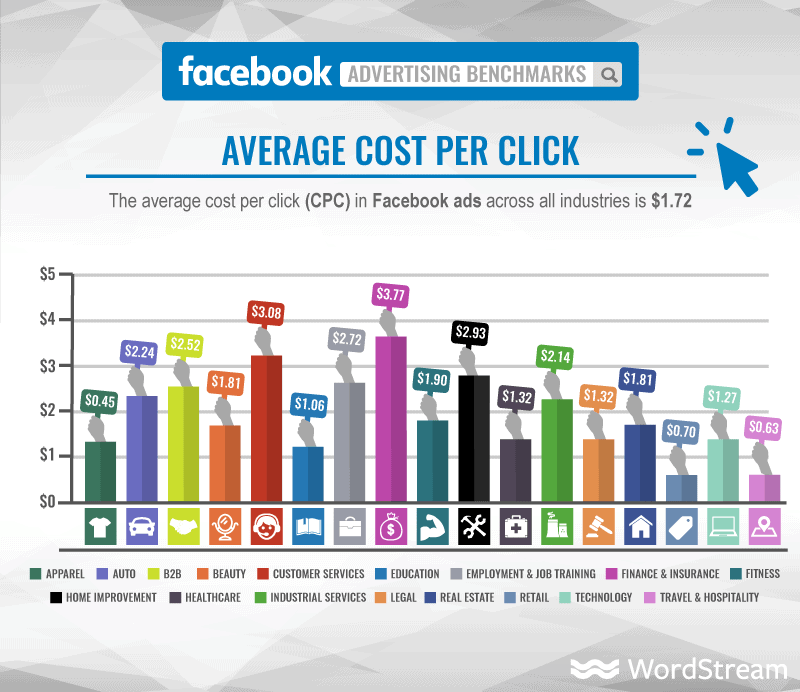 In social media marketing, your cost per click depends on many factors—including what industry you’re in. Source: Wordstream

…but that’s also likely because the value of a click is higher to brands advertising loans than to brands selling T-shirts.

At the end of the day, what matters is that you’re seeing positive ROI from your ad campaigns. Still, it never hurts to get an idea of what other marketers are paying.

Before we jump into our handy graphs, though, we want to be clear about how ad costs are defined on each social network.

On Facebook, most ad costs are measured in cost per click (CPC) or cost per thousand impressions (CPM).

Depending on your objective, you’ll either pay on a CPC or a CPM basis.

LinkedIn calculates CPC and CPM its own way. Impressions on LinkedIn are counted when an ad is “visible for at least 300 milliseconds with at least 50% in view on a member’s device screen or browser window.”

Meanwhile, if you’re paying on a CPC basis, LinkedIn will charge for clicks on your ad content, your company name, or your company logo.

Twitter is not quite as public about how it counts impressions for CPM bids, but according to Twitter Business, “an impression is any time your ad is shown to users,” implying a fairly broad definition.

Cost per click on Twitter refers specifically to link clicks, so you know that each click you’re paying for took a user to your desired URL.

Each social network counts clicks and impressions a little bit differently, which can affect how CPC and CPM are calculated. These differences likely explain some of the differences in average CPC and CPM across Facebook, Instagram, Twitter, and LinkedIn.

For example, if Twitter counts any part of your ad being on screen as an impression while LinkedIn requires at least 50% of it to be visible, it makes sense for LinkedIn to charge a little more per thousand impressions.

After all, they’re selling more strictly-defined impressions with more value for brand awareness on average. 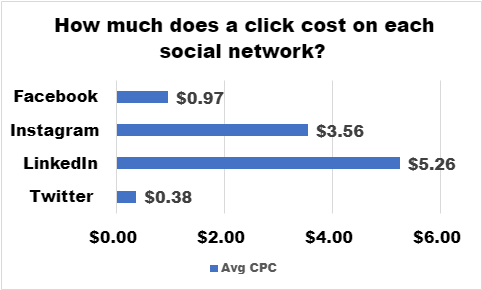 At $5.26, LinkedIn actually has a much higher CPC than any of the other three networks. However, this doesn’t mean that LinkedIn’s ads are overpriced.

Rather, it shows how highly clicks are valued on such a B2B-friendly platform with a highly educated, professional user base. 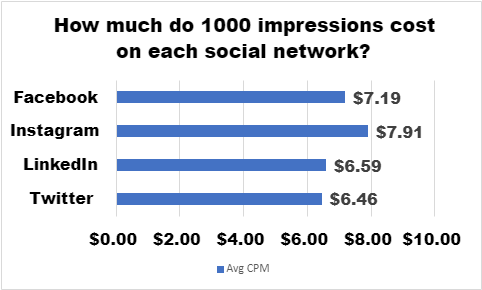 Impressions on Twitter are cheaper on average than the other three platforms at $6.46 — though that might be related to their less restrictive definition of what counts as an impression.

LinkedIn and Facebook are not too far from Twitter’s average CPM, at $6.59 and $7.19 respectively.

Now, you may not be surprised to see that Instagram has the highest CPM of these four major social networks in 2021.

For businesses — however big or small — Instagram is the place to be to get the word out on who they are and what they do. I mean, who wouldn’t want a slice of Instagram’s mammoth-size presence? The app has over 200 million users that visit at least one business profile every single day! No wonder the ad costs are higher on Instagram than the other social networks.

Now that you have a sense of what a typical advertiser with a broad audience pays for clicks and impressions on each social network, you’re probably wondering about something else: how can you get away with paying less?

Facebook: Cap your bids. Facebook has no idea what a click or an impression is worth to your brand—that evaluation is up to you, so don’t bid so high that you’re getting negative ROI. Try lowering your maximum CPC or CPM bid and Facebook will attempt to find cheaper clicks and impressions for you so it can keep delivering your ad.

Instagram: Set a lifetime budget instead of a daily budget for your ad campaign. This will let Instagram’s ad engine find the cheapest times and days to show your ads, lowering your CPC/CPM.

Twitter: Set a manual bid. If you choose automatic bidding, Twitter will definitely help you win ad auctions, but potentially at a higher price than you’d like to pay. Try starting with a low maximum bid like $0.50 per click, then raise it gradually if your ads aren’t being delivered (though this figure will vary depending on who you are and what you’re advertising).

LinkedIn: Use Matched Audiences. This feature lets you target users who are in your contact lists, have visited your website, or work for a specific company. Targeting with Matched Audiences raises CTR 30 to 40% on average compared to standard targeting (and thus makes your ads more cost-efficient).

There you have it – how much ads cost on each of the four top social networks and how to get those costs lower.

Again, average ad costs on social media depend a lot on the specifics of your ad campaign and your business, so don’t give up on your ad campaign if you have a higher CPM or CPC than what we’ve listed here.

After all, you may be getting more value from a click or an impression than other advertisers, justifying a higher ad spend.

On the flip side, don’t get too cocky if you’re paying less per click or thousand impressions on average, as there are a lot of reasons this could be.

For example, it could mean that you’re targeting a very general audience and the clicks you’re getting aren’t likely to convert.

However, what this data should do is give you a helpful reference point. Paying $10 for 1,000 impressions on Facebook wouldn’t be extreme, but paying $100 definitely would be.

So keep these figures in mind to keep your ad spend in the right ballpark — and your budget will thank you for it. 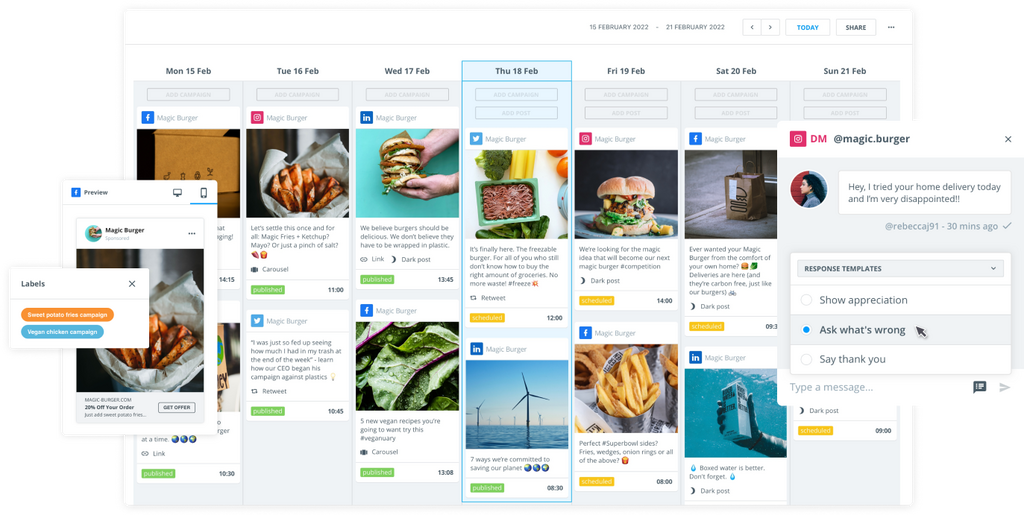