The team takes a look at the data behind the Black Friday on social media. Find out which brands are dominating and the depths to which humanity will sink.

Whether you’re after socks, microwaves, smartphones or dog food you’re sure to find yourself a deal.

We decided to take an in depth look at the Black Friday conversation to see what’s going on this year.

We just ask that you spare a thought while reading for those working in retail today.

We gathered a 10% sample of mentions of Black Friday (and #BlackFriday), searching for mentions on over 80 million websites between 20th and 24th November, producing a healthy 220k mentions to analyze.

Let’s just say there’s no shortage of noise and absolutely no monopoly on the Black Friday conversation. Using a variety of components in our Analytics platform to unearth the accounts and messages that are being spread far and wide, brands definitely took a back seat to Black Friday commentary (memes, jokes, criticisms). We’ll get to that later.

Meanwhile, an obvious trend is the prominence of Black Friday conversation outside of the US. While geo-tagged tweets don’t represent the whole of the conversation (mentions go beyond Twitter, and not everyone allows Twitter to geo-tag their tweets), they’re a good indicator of scale. 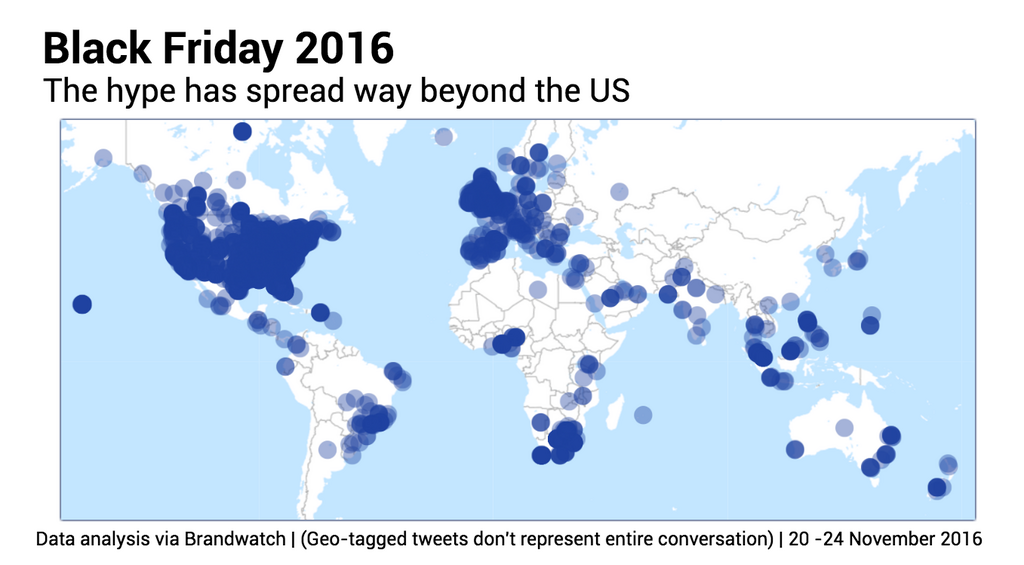 That Black Friday sales have been going on literally all week has probably helped with this. Forget the 12 days of Christmas – this year it’s all about the “five days of Black Friday”.

“Bank account” was one of the top used terms in the conversation. Black Friday’s timing isn’t exactly great for consumers paid in the final days of the month, with many people complaining that they simply can’t afford to shop on Black Friday this year.

Me: I wish I had enough money to shop all these Black Friday deals

Despite the apparent lack of cash, online sales are expected to total over $3 billion this year. We’re also expecting to see a boost in mobile sales so we’ll be keeping a keen eye on App Institute‘s numbers.

#BlackFriday: Online vs. Desktop sales in 2015 (via @appinstitute) https://t.co/qoEoYQOJ8M pic.twitter.com/ZSQ5BvUsX2

Perhaps surprising in the data is how little big brands are actually dominating the conversation (although Playstation have done a good job of getting their deals out there by promoting their hashtag on Twitter).

However, there are definitely some exceptions.

@Target, @BestBuy, @amazon and @ToysRUs were among the top mentioned verified Twitter accounts in the BF conversation between the beginning of 24 November to around 9am on Black Friday in our dataset.

While they aren’t being @ mentioned so much, Sephora are making a huge mark, with hundreds of people talking about their sale in relation to their lack of money.

me: wow can't wait for the Sephora Black Friday sale!!!

Perhaps oddly, @NASA is also doing particularly well. They’ve been hijacking the Black Friday hashtag with things in space that are black.

While they haven’t been getting in into the top mentioned accounts, it’s been refreshing to see at least one brand get behind good causes this week by donating their Black Friday takings to charity.

What Was Social Media Most Thankful For This Thanksgiving?

College tuition has been a key part of the conversation – we found around 5,000 mentions of “college” or “tuition” within ten words of Black Friday terms.

What kind of Black Friday deals do you guys have @FAFSA

Something that has become a staple of Black Friday news coverage is the fights, and that’s certainly evident in the conversation.

We found 740 mentions of Black Friday related fights in the overall dataset.

It’s really heartening to see people coming together around the tradition.

If you're going Black Friday shopping tomorrow, be a decent human being & turn your phone horizontal before you record any fights

Snape sums it up, really.

Black Friday reminds me how much I hate Muggles.