The Brandwatch React team kicks of 2018 with a spoiler filled review of Black Mirror Season 4 generated from nearly a million tweets and Reddit posts.

Black Mirror Season 4 has been on our screens for five days, so any self respecting fan will have definitely watched all six instalments by now.

If you haven’t, hit close because spoilers are coming thick and fast in our first data analysis of the year, reviewing the new episodes.

We can be confident that most people have started watching because we tracked nearly a million tweets and posts on the Black Mirror subreddit between the show’s release on December 29th and Monday 1st (ET).

With millions of posts to analyze, we decided to review the season by looking at how the different episodes were discussed.

First of all, which episode generated the most buzz?

Kind of predictably since it was the opening episode, USS Callister generated the most mentions, topping 46k across Twitter and Reddit.

The space-themed episode, in which a guy steals people’s DNA and puts them inside his own personal video game where he is the hero, is undeniably a great start to the season. 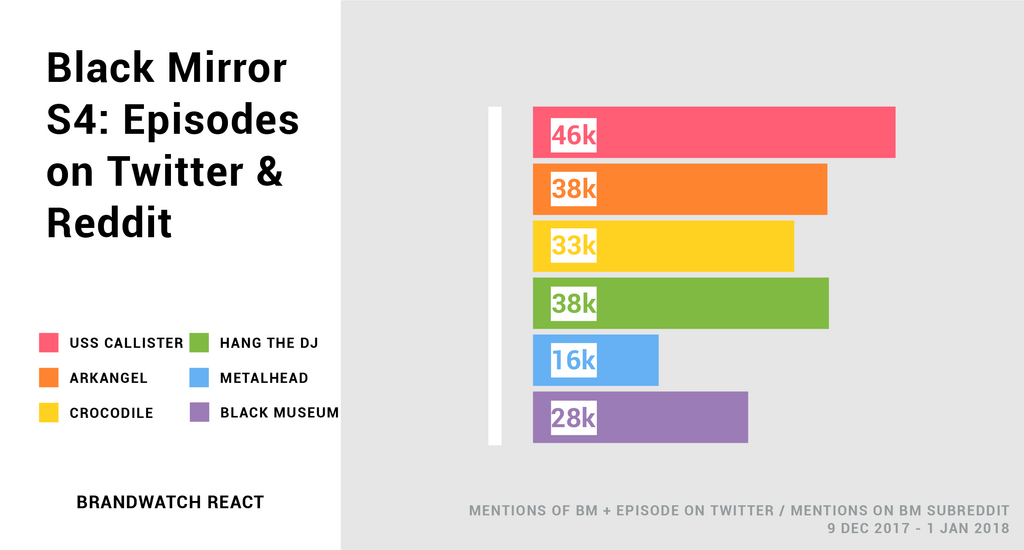 USS Callister was followed by Hang the DJ, where an app dictates how long your relationships with random people will be and things go surprisingly well. It got marginally more than Jodie Foster directed Arkangel, an exploration of parenting in a world where almost anything is digitally possible, and how it can all go wrong.

Since we were looking at both Twitter and Reddit mentions we decided to split them out to see if people were talking about the episodes differently on the different platforms. It turns out they do quite significantly.

What seems clear is that those who hang out on the dedicated Black Mirror subreddit are more likely to have binged their way through the episodes than general tweeters, with less attention directed towards the earliest three episodes on Reddit. 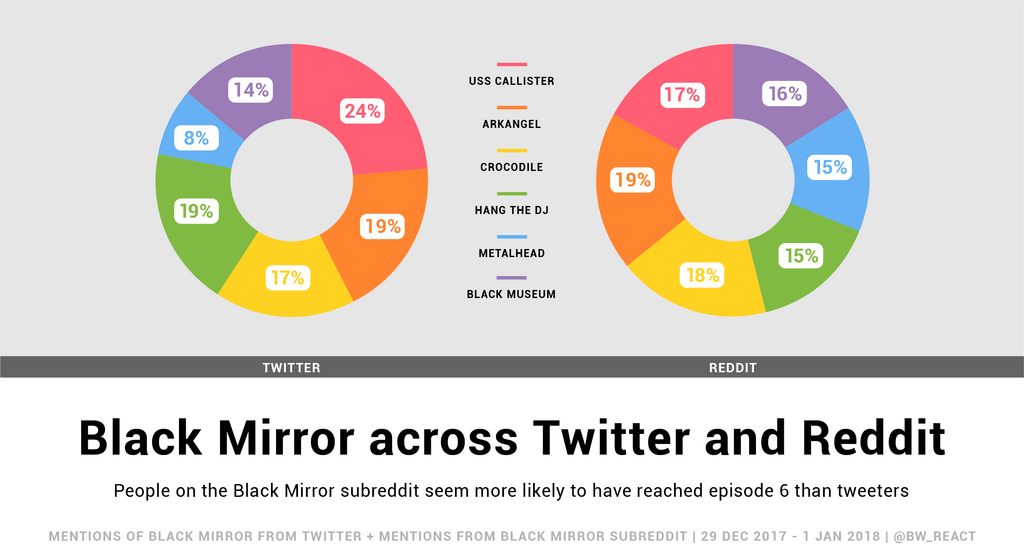 Metalhead, which is the least mentioned episode on Twitter and overall, appears to get more of a fair shot on Reddit, with conversation about the shorter episode, in which a woman tries to escape a deadly robot dog, getting around the same amount of debate as Hang the DJ.

Netflix’s Most Binged Shows 2017: What Does the Social Data Say?

How did men and women talk about the episodes?

We should point out that we’re working with Twitter data only here, since Reddit accounts aren’t categorized by gender by Brandwatch.

It turns out that women are actually bigger Black Mirror talkers than men, with 54% (or 140k unique authors) categorized as female. 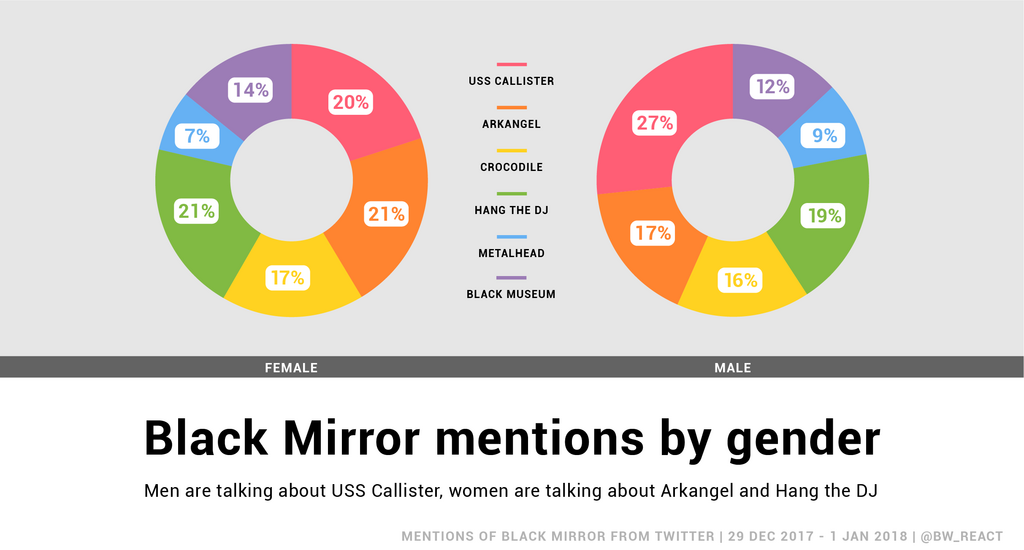 Women paid most attention to Hang the DJ and Arkangel and also spoke relatively less about Metalhead than men.

Dating drama Hang the DJ was fairly popular with both men and women.

Which episodes were most disturbing?

This is our favorite question we like to put to our Black Mirror data. It’s one we answered last year when Playtest of season 3 was clearly the most terrifying.

This year, we took all tweeted mentions of each episode over the first few days of release (excluding retweets) and then found out what percentage of each set included distressed terms like “freaked out”, “creepy”, “I’m crying” etc. It turns out that the least mentioned episode, Metalhead, also had the highest % of scary descriptors. To be fair, it was dark.

Next up was Arkangel and after seeing exactly how a piece of technology built for protecting a child completely tears apart the relationship between a mother and daughter, I can see why it was high up there.

Perhaps most surprising is Crocodile’s placement near the middle. Horrifying things happen in this episode. Horrifying, horrifying things. You get to the end and think no, not even Black Mirror would do that – oh wait, yep, they did it. Oh god. Perhaps people were too broken to tweet about it – I certainly was. Hang the DJ is definitely well placed at the bottom of the list – while it’s definitely a bit eerie, it’s generally a pretty positive story.

We were a little surprised to see Black Museum was second least disturbing. It’s the final episode, in which a woman called Nish goes to a museum of awful technology’s past and the audience hears three very grim stories of how technology (historically propagated and now displayed by all round awful human Rolo Haynes) destroyed lives (and deaths). That said, you definitely feel good for Nish in the end, so maybe people held back on the freaked out tweets.

What did you think of Black Mirror Season 4? Let us know @BW_React.