Netflix’s Most Binged Shows 2017: What Does the Social Data Say?

The Brandwatch React team compares social data with Netflix's data to see whether people talk about the most binged shows of the year or just watch them.

Anyway, as data nerds, we were pleased to see stats flying around last week on Netflix’s most binged shows of 2017.   They defined the most binged shows (or “shows we devoured” as popular for watching more than two hours per day, and top of the list is the hilarious American Vandal.

This got us thinking – does the social data match the Netflix stats? Are people talking about binge watching these shows, are they quietly watching while Netflix logs their guilty pleasures? Perhaps we’re more willing to post about shows we perceive to be popular than the shows we’re actually obsessed with…

The list of the most binged shows on Netflix

Would the most binged show also be the show on the list that’s talked about most?

A year of hype around Netflix’s most binged shows

Perhaps surprisingly, no – American Vandal conversation hasn’t got much at all on the mentions of the likes of 13 Reasons Why and Riverdale. 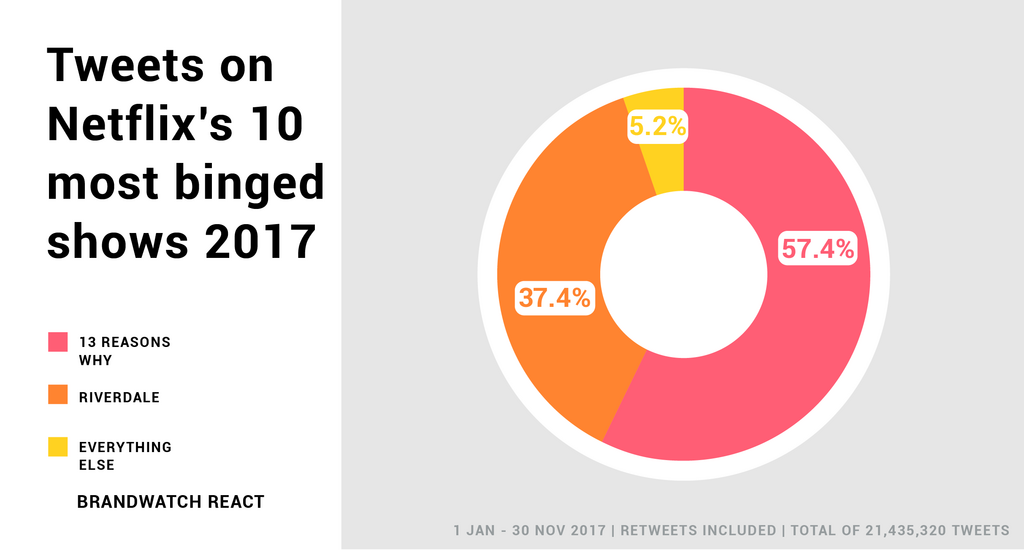 Here’s Netflix’s list re-arranged in order of the tweets about the shows:

You’d think that being the most hyped show would mean you’d probably get to be the most binge watched, but that doesn’t appear to be the case.

We decided to go deeper, searching for mentions of “binge watching” (and related terms in Spanish and Portuguese to account for mentions of Ingobernable and 3%, which are were originally made in those languages).

So we’ve established the most hyped show on the list Netflix provided us, but was it also mentioned most alongside binge watching terms?

It was. And Riverdale was second most mentioned, just like in the above chart. 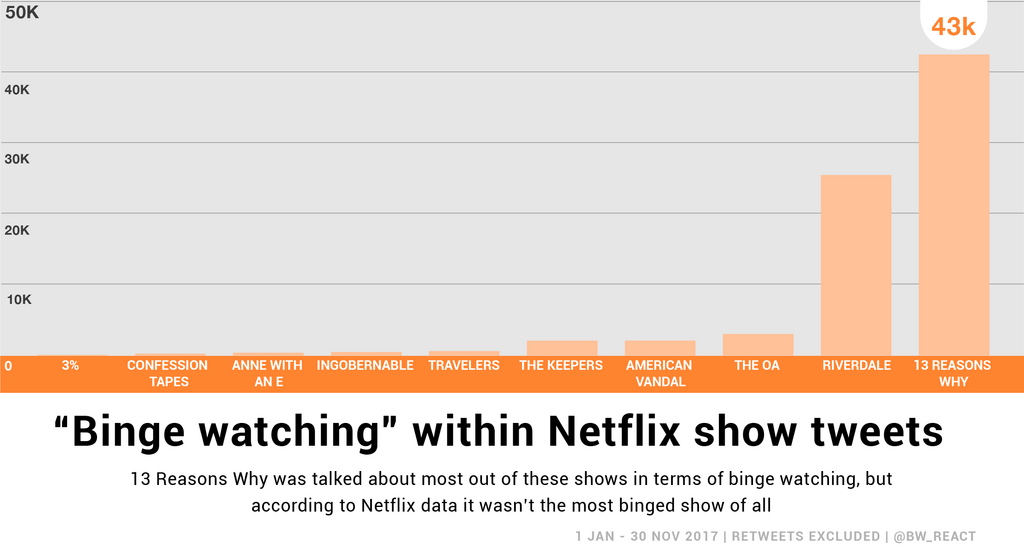 While those two were at the top, the order of the other shows switched around considerably.

Here’s all the data we have in one place:

Based on the Brandwatch data (and assuming we only looked at these shows) we’d have guessed that 13 Reasons Why, Riverdale and The OA would be the most binged shows, while 3%, The Confession Tapes and Anne with an E would be the least.

What we’ve seen here is that the conversation about binge watching these 10 shows is very different to Netflix’s stats. There are several potential reasons for this.

Firstly, that Twitter volumes often offer clues but don’t necessarily correlate with people’s behaviour. While someone might tweet about how they planned to spend the weekend binge watching Stranger Things, there’s no way to tell using just social data that they went ahead and did it (unless they start live tweeting their binge, but let’s assume that’s the minority).

Secondly, we need to think about the reasons why people tweet about binge watching a show. Take 13 Reasons Why – the show got a massive amount of publicity and started lots of conversations around mental health, whether they handled the issues appropriately etc. As a very visible TV show that had a lot of young viewers, it’s almost inconceivable that it would suffer from a lack of mentions.

Like 13 Reasons Why, but for different reasons, Riverdale has a huge online community – the very active subreddit has more than 38,000 subscribers at the time of writing. Anne with an E, while apparently binged heavily has only a fraction of 13 Reasons Why’s following.

What Netflix didn’t release alongside these stats is the most viewed show of 2017 (the show viewed by the largest number of people, not the show that got the most people watching two hours or more per day). Perhaps this is where social data might be able to offer a little more insight.