The Brandwatch React team analyzes 67k tweets from 42k authors to determine which episodes resonated most on social media and which were most disturbing.

Black Mirror season three has hit Netflix with six traumatizing episodes that’ll make you want to go and hide in the woods.

The series, which originally came out in the UK, was snapped up by Netflix who announced the new series in January 2016. The new show follows the same format of stand-alone episodes that act as eerie depictions of what technology is capable of in the not so far away future.

Twitter is no longer available to users below a 5 star rating. We apologize for the inconvenience.

The Brandwatch React team decided to take a look at the data surrounding the show, examining 67k tweets from 42k unique authors between 20th and 23rd October to determine which episodes stood out the most for online commenters and which were most distressing.

If you wish to avoid spoilers do not read the final section of this article (entitled “#DeathTo ___”).

Like with any Netflix series, some fans just can’t get through them fast enough. We found over 2k mentions of “binge” or “binging” or “binged” in our dataset, and watched as the later episodes gained popularity over the weekend. 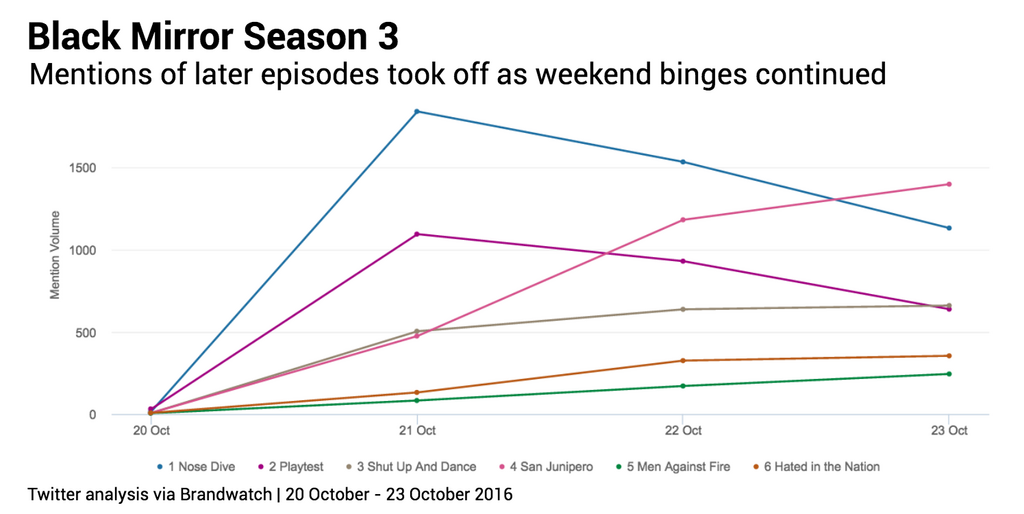 Since the season has only been available for a few days it’s understandable that the later episodes (five and six) got less mentions than episodes one to four. However, six overtook five and four overtook three so mentions volumes don’t necessarily correlate with episode order. 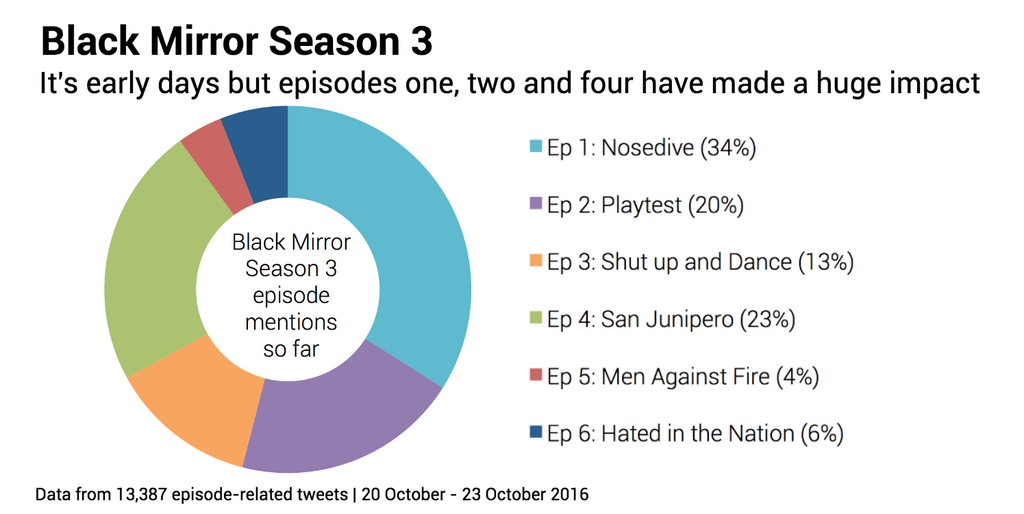 Perhaps it’s fitting that Nosedive would cause a big stir on social media. It tells the story of a young woman attempting to improve her life in a world where social reactions are rated out of five, with the influential “high fours” living the high life and reputations prone to “nosediving” fast. It was certainly resonant with social media users and reminded us a lot of a certain app.

#BlackMirror's "Nosedive" episode is just a step away from reality. And that's scary.

It’s also come in conjunction with some scary looking revelations about how China plans to rate people.

Reputelligent Tip: votes from upscale people will help your own rating. Expand your sphere of influence now. https://t.co/bc2E12x2dd

Once we found out which episodes caused the biggest stir we were interested to find out which were the most disturbing.

We searched for terms like “troubling”, “terrifying”, “eerie”, “unnerving”, “creeped out” etc. within episode mentions and found out which had the highest percentage of key terms that related to the distress of the viewer.

There was a clear winner and it came in the form of episode two (Playtest), in which a man who’s strapped for cash agrees to test out an immersive new game created by a controversial developer (only to find it’s not much fun).

New @blackmirror out on Netflix . DO NOT watch the episode called 'Playtest' before bed. Freaked out… #BlackMirror 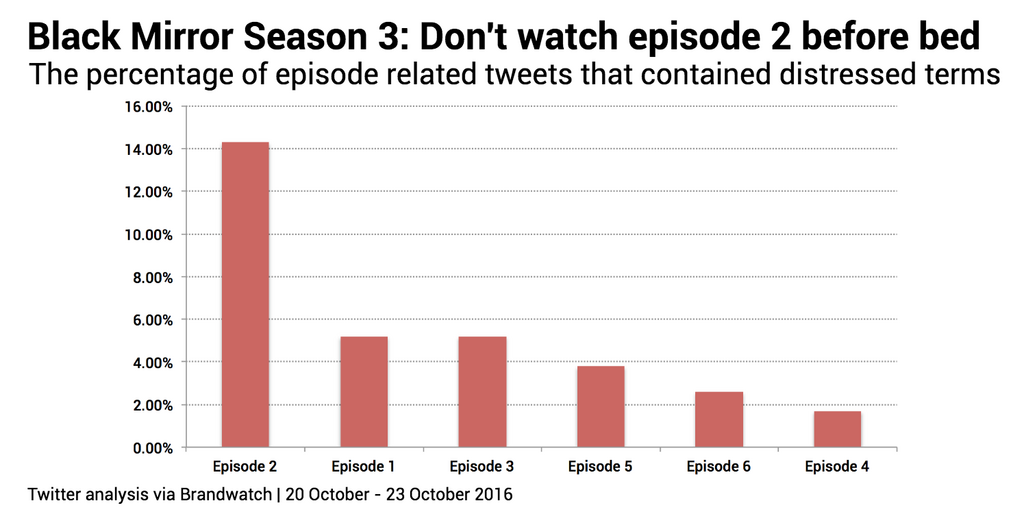 Interestingly, episode four (San Junipero) is one of the top mentioned episodes, but it also contains the lowest portion of distressed keywords. After an incredibly dark episode three (Shut up and Dance) it looks like the Black Mirror producers spared a thought for traumatized viewers by giving them a slightly less soul-crushing experience.

Part of the final episode involves the hashtag #DeathTo, in which tweeters are invited to tweet the name and photo of someone they hate and with enough mentions they’ll be subjected to a horrible mechanical bee related death.