Netflix Data: Analyzing the Reception of House of Cards Season 5 on Social

The Brandwatch React team takes a break from real world politics to analyze the social data surrounding the House of Cards Season 5 launch.

House of Cards season 5 is upon us, and as I type thousands are mid-binge.

With US politics the way it is, the latest in the House of Cards series couldn’t have come at a more poignant time. While Spacey’s Underwood might not sport a mop of swooping golden locks, and while Trump may lack the polish of Underwood’s delivery (yesterday he tweeted the word “covfefe“), many are rushing to draw comparisons between the real and fictional Presidents.

A new season of House of Cards is on Netflix, and I won't lie…I'm going to jump to episode 13 and see how this whole Trump mess turns out.

We were keen to monitor Twitter’s reaction to the new season, how they were consuming it and how it compares to last year’s reaction. Of course, we had to sprinkle the data with quotes from President Underwood himself.

House of Cards Season 5: “Hunt or be hunted”

Comparing mention volumes on the opening two days of this season and last season we found that season five had significantly less tweets per day.

We were surprised to see this, especially given our Query was a little more inclusive this year than last year’s (incorporating more complicated or shortened mentions like “hocs5” etc, compared to last year’s more simple search).

There are a number of potential reasons for this.

For example, last year the season was released on a Friday, while this year’s was released on a Monday. With a full weekend ahead to binge watch House of Cards season 5, perhaps viewers had more time to discuss their excitement online last year.

Also, politics is perhaps more salient and raw an issue than it was this time last year. People have had enough of it. 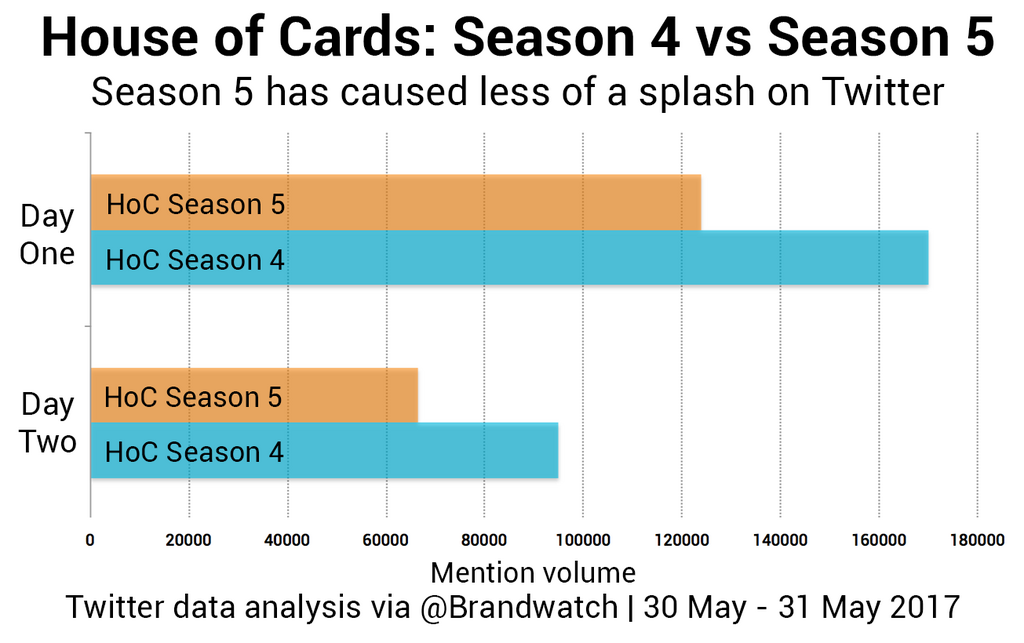 Still, any reaction that exceeds 120,000 mentions (as long as it’s not a PR crisis) should be celebrated.

“I don’t know whether to be proud or terrified. Perhaps both.”

We found thousands of people claiming they would be binge watching the season, with the most significant peak at 10am ET on the day of release. 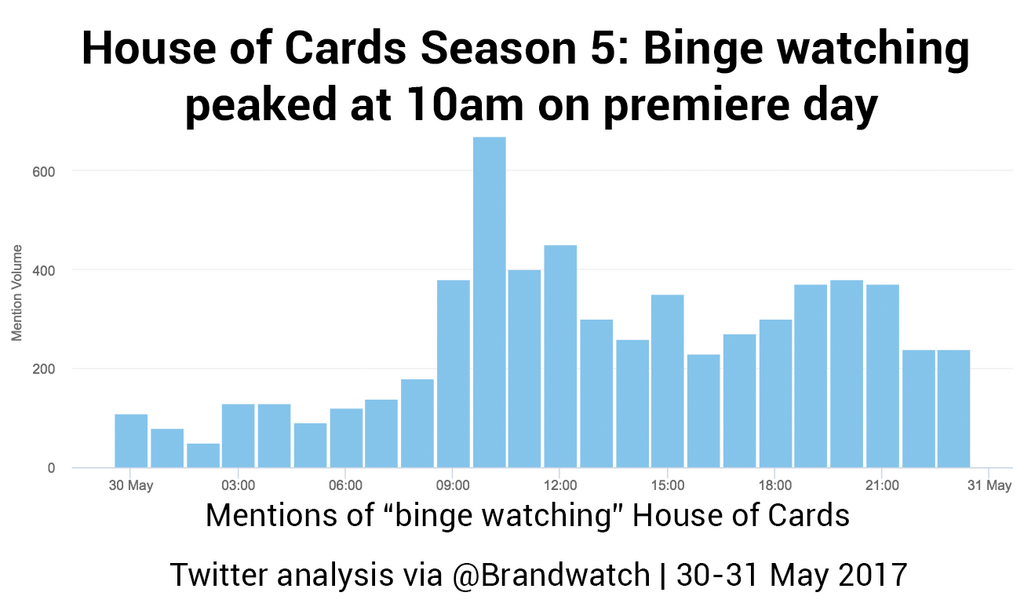 It’s theoretically possible to make it through a whole season of House of Cards in a single day, but how many people did?

“Of all the things I hold in high regard, rules are not one of them.”

Frank Underwood may not like rules, but we love them.

In advance of the Netflix premiere of House of Cards season 5, we set up rules that meant any mentions captured by our query that included reference to an episode would be categorized appropriately (Ep 1, Ep 2 etc). We updated this data the weekend after the release so that we could see which episodes were stirring the biggest reactions from viewers.

Naturally, episode one has the most mentions. It marks the beginning of the binge, the point where most people are likely to share their excitement about the new season. 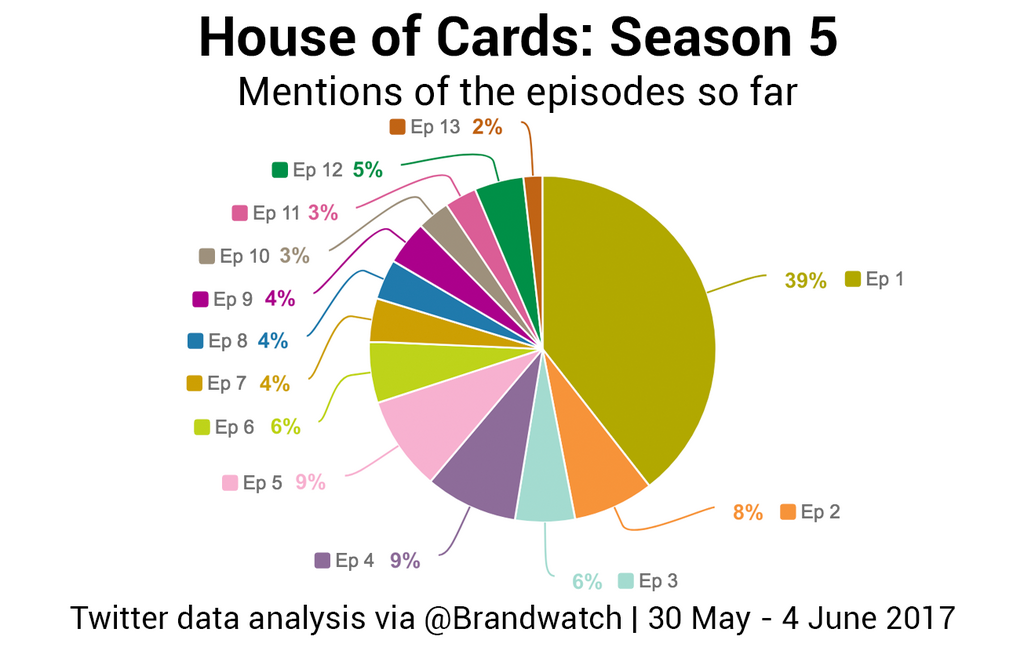 Perhaps more surprisingly, the season finale (episode 13) is getting very few mentions compared to the rest. Is it so underwhelming that it’s got no mentions? So exciting that people forget to tweet? Or perhaps many viewers just haven’t got there yet. 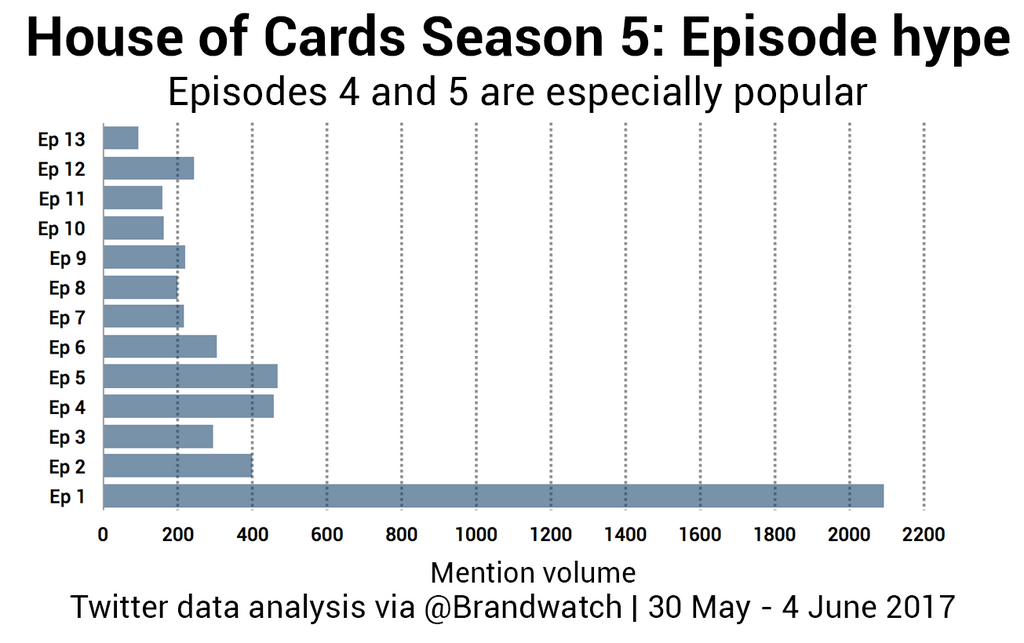 Just like last year, episode four is one to look forward to. As is episode five which is just ahead on mentions.

Episode 12 is another big one, with a particular focus on the opening scenes. Brace yourself.

The relatively low mentions for episode 13 is surprising. We would suspect that people simply haven’t made it this far yet and an especially explosive start to episode 12 gave it its boost.

We found that the USA were predictably tweeting the most about House of Cards (64%), with the UK in second place making up 12% of the tweets.

As the UK prepares for its own election, which is more Game of Thrones than House of Cards, a spot of fictional drama amid the hostile campaigning has probably gone down quite nicely.

Talking of demographics, we also looked at the gender split of people talking about the House of Cards season 5. Men were more talkative than women on Twitter (something we’ve found to be quite common when looking at politics). 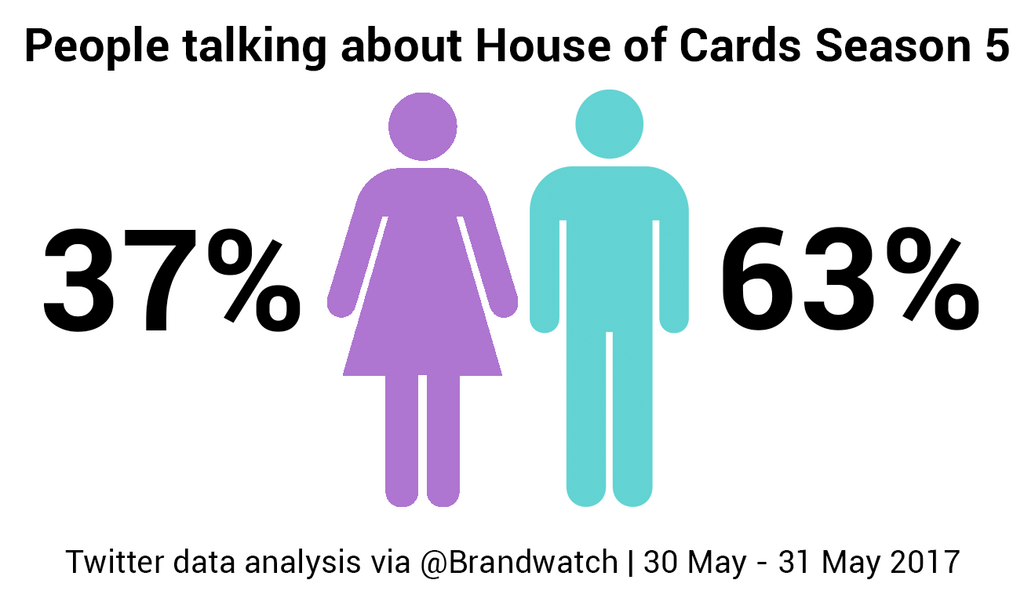 Breaking this down further, we decided to look at how men and women discussed the main characters, Claire and Frank. 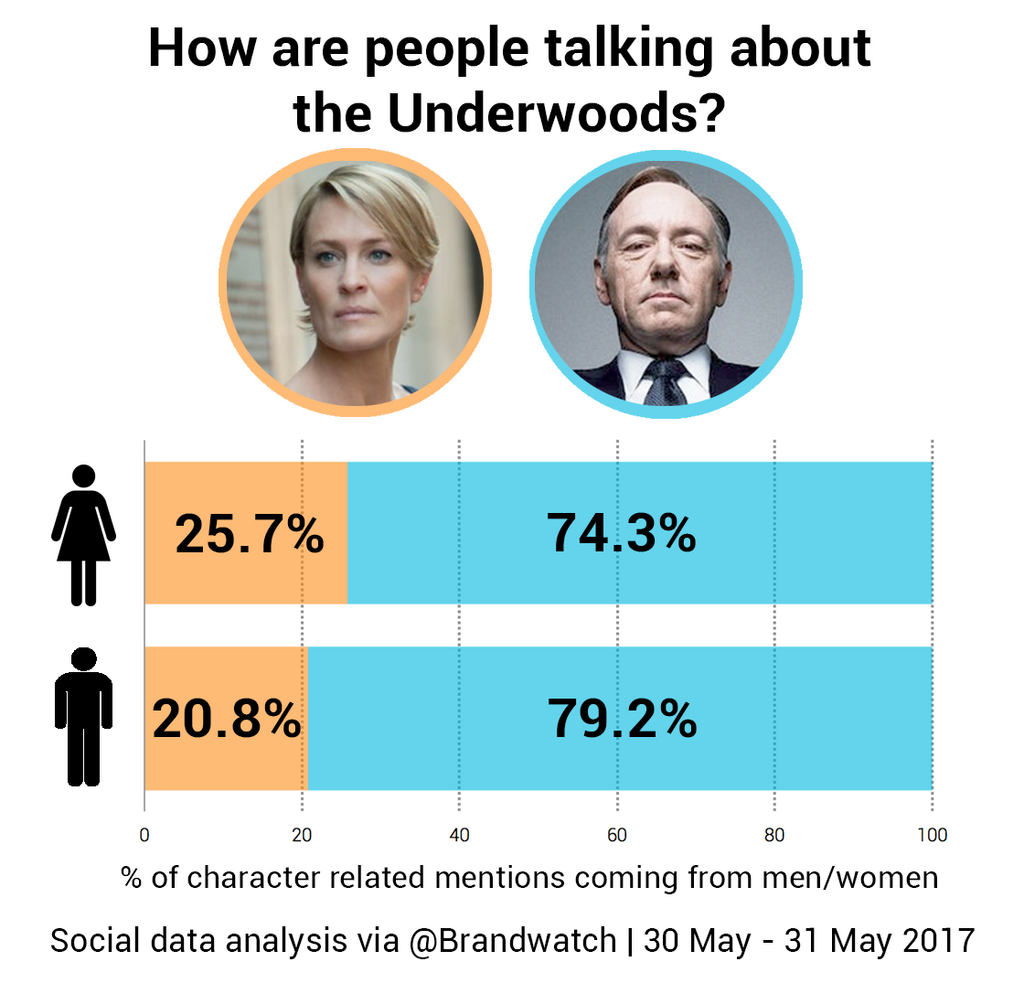 Women might not be tweeting as much as men about the season, but they’re more likely to talk about Claire than men when they do.

“I have no patience for useless things.”

Why gather social data on popular shows? There could be any number of reasons a TV network might want to delve into the social data. Are they lacking in viewers of a certain demographic?

Breaking down their thoughts on a show and working out what they do and don’t respond to is a good way to help them make decisions about targeted ads and maybe even script edits.

Gathering this sort of insight from small focus groups is all very well, but with a wealth of data drawing from millions of sources at your fingertips with a tool like Brandwatch Analytics, the possibilities go one step beyond what is achievable with traditional research methods. This post barely scratches the surface of the incredible insights the platform is capable of revealing.