K-pop Goes Public: How Stans Are Buying Into Bands

How did the world become obsessed with K-pop, and do fandoms have the power to drive commercial trends? We checked it out using our Consumer Research platform.

K-pop isn’t just about nailing cute dance routines and catchy songs. Today we’re checking out the rise of K-pop and how its fans became so powerful in commandeering social conversations and creating commercial trends.

The rise of K-pop

“Hallyu” is a Chinese term meaning “Korean wave.” It’s used to describe the meteoric rise of popularity in Korean beauty trends, movies, cuisine, and music (to name a few things) around the world. Global consumers can’t get enough, and K-pop is a major part of this.

K-pop has been climbing towards global chart domination for years. But when we investigated the English-language rise of the music genre on social media from 2016, we found that mentions really started taking off in 2018. 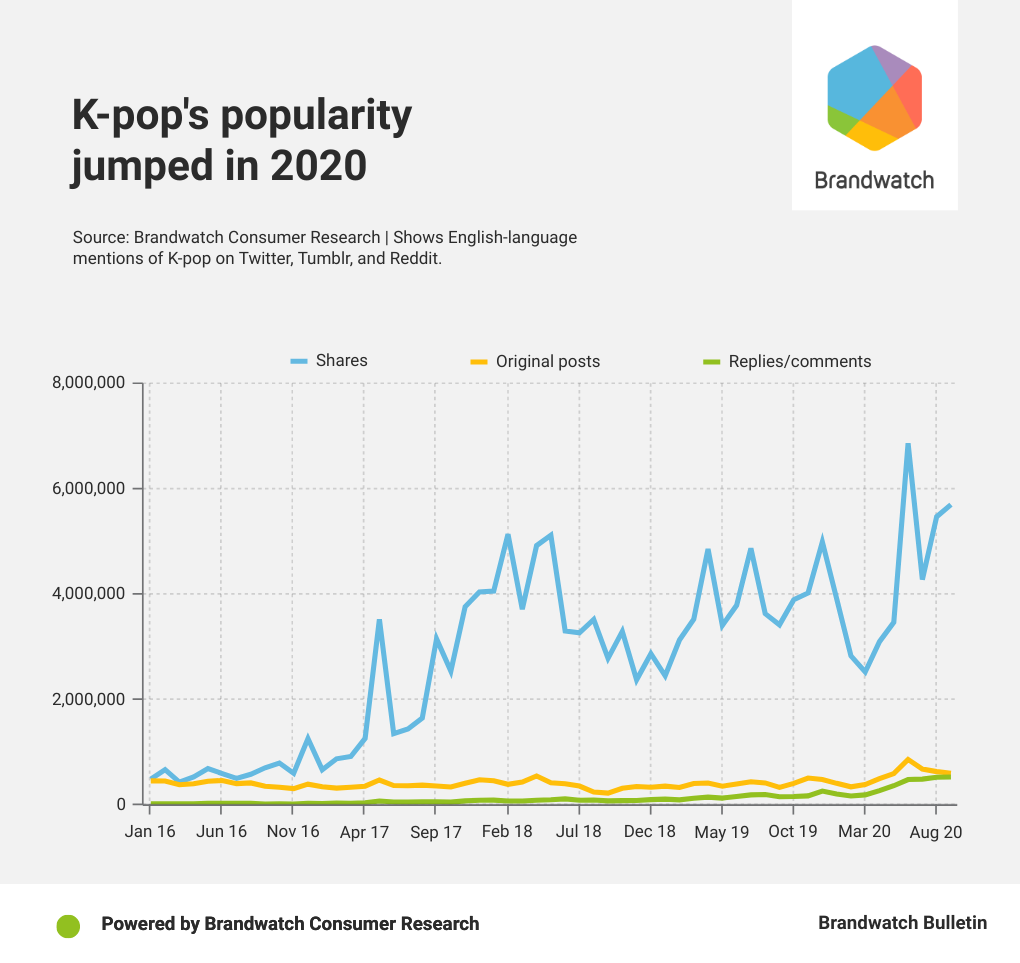 Interest peaked in the summer as people voted on MTV’s hottest K-pop superstar and celebrated song releases from megastars BTS and Blackpink.

K-pop has been propelled into timelines throughout the world because of its loyal fans.

Ask any Brandwatch analyst and they’ll be able to tell you how mentions of BTS or Blackpink dominate conversations you’d never even think would be associated with them, from the mundane to the unusual. Essentially, conversations around the biggest K-pop groups are so massive that they can skew the data on pretty much any subject.

But what’s most interesting is how this online popularity is translating into dollars.

This analysis originally appeared in the Brandwatch Bulletin. Get the latest insights and trends straight to your inbox

An example of this is BlackPink’s collaboration with Selena Gomez on the single Ice Cream, which resulted in an actual ice cream flavor that had many fans hyped.

Our AI-assistant Iris found a 1734% increase in mentions of #BlackPink in July 2020. Conversation was generated by the song and by people trying to find the coveted pink hued ice cream. You can find a “rare” tub of the stuff on Ebay now for a cool $139.

BTS takes the cake when it comes to trendsetting conversation and legendary partnerships.

While they’ve not broken last year’s mention record yet (which was driven by Billboard Music Award success), they’ve had a healthy rise in mentions throughout 2020 and the volumes are massive. 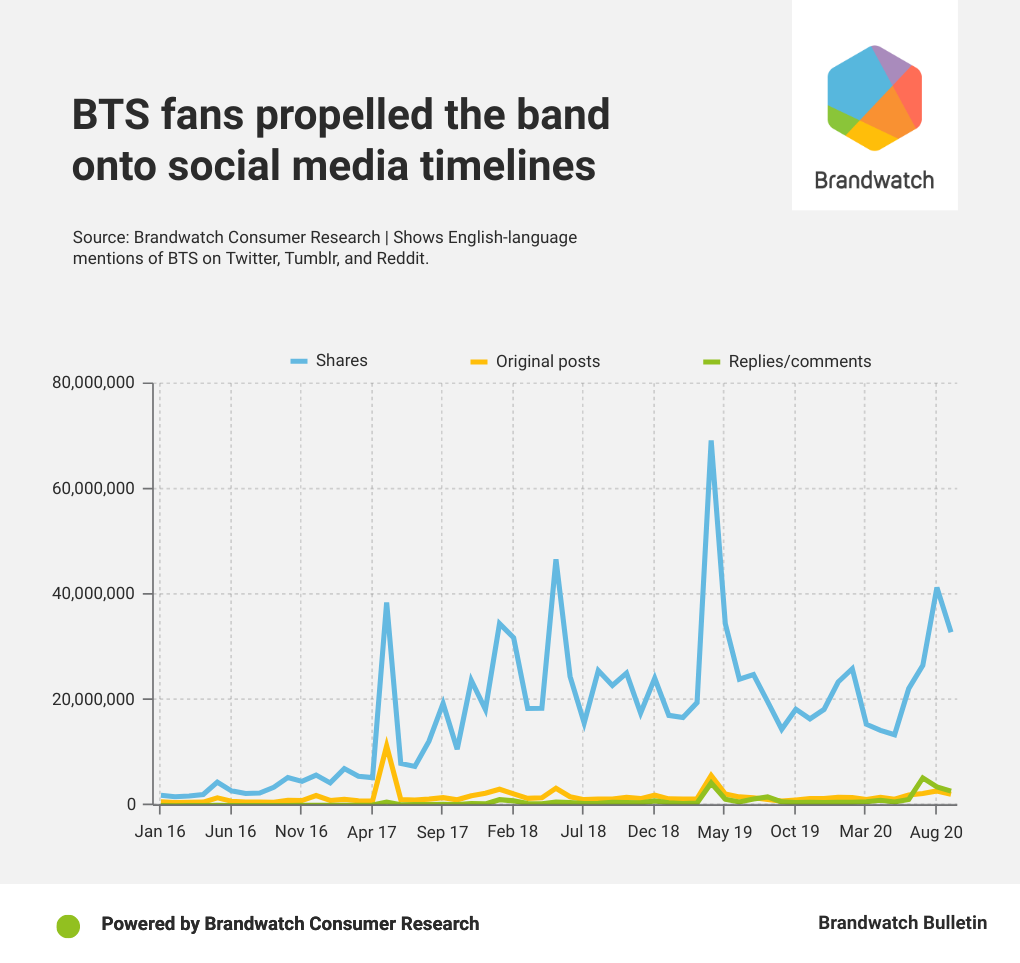 Again, it’s thanks to fans that BTS enjoy so much success on social media. In fact, their fans have assembled themselves into a formal group called the ARMY. When we checked the data out last year, we (conservatively) estimated the number of unique authors mentioning the band could theoretically form around 48 actual armies. In short, BTS command the biggest, most buzzing online following of the genre (and potentially of all musicians).

Mentions are one thing, but how does that translate to commercial success?

According to the New York Post, in 2017, BTS were the reason for one in every 13 tourists visiting South Korea, bringing in over $3.6 billion a year to the country’s economy.

On top of the money the band generates from their music, brand partnerships, and events, there’s now a new opportunity for fans to invest in the K-pop sensations.

The news generated nearly a million online mentions in itself, and, while it’s a pretty novel prospect to buy into a band in this way, it seems to have paid off.

Vulture reported: “The BTS boys became millionaires today with an impressive initial public offering of 135,000 won for label Big Hit Entertainment. That’s approximately $115 per share — the biggest South Korean market debut in over three years — which values the label at over $4 billion. Each member of BTS got 68,385 shares from Big Hit CEO and producer Bang Si-hyuk in August, putting $7.9 million in their pockets with Big Hit’s September 28 debut.”

This represents a big shift in how fandoms enjoy music – they are both proud to show their support and happy to buy into the band instead of just streaming them. K-pop isn’t just a genre of music. It’s a force, and the power is growing.

If you’d like to know more about this data, or would like to request some, drop us a line [email protected] or slide into our DMs @BW_React.