Contempt and Conspiracy Theories: A Depressing Look at the Hate Meghan Markle Gets Online

There's a growing swell of conversation around the Duchess of Sussex that seeks to discredit her. Here's a social data analysis all about it.

Members of the royal family are routinely subjected to high levels of scrutiny and magnifying glass-style inspection.

Body language, facial expressions, small elements of their outfits and more are all analyzed in the extreme. What could it mean? What clues do they give about inter-royal relationships?

It’s not something that’s letting up, either. Here’s one of the most shared tweets around Meghan this year. To save you a click, here’s one example of the things Meghan has apparently been doing on purpose in order to make sure all eyes are on her bump: “Meghan has also been pulling open her coat ever so slightly, to make sure fans and photographers can fully see her blossoming bump.”

Media speculation is one thing, but social media – where ethical standards around the intense criticism of an individual are even more ambiguous – is another.

After becoming peripherally aware of some of the negativity around Meghan Markle, I decided to break down online mentions of her to see what it actually looked like.

The important thing to say is that most sentiment-categorized conversation around her is positive – the majority of people don’t have an issue at all. But there’s a growing collection of accounts and mentions that seek to disparage her, and it’s pretty depressing to witness.

I laughed when I first saw the mentions of #Megxit in the conversation. I’ll hand it to those who invented it, it’s a pretty good name for a hashtag.

In case it’s not obvious, it’s a play on Brexit – the idea is that Meghan should exit, because people don’t like her.

The hashtag is growing in size on Twitter, with around 1,500 mentions in a week at the last count.

Since the beginning of the year, Brandwatch’s Reach Score estimates that nearly 3.5 million people have seen #Megxit in their timeline.

It’s a small percentage of the conversation about Meghan Markle, but it’s growing with time. Why? There are a few reasons.

In some circles, Meghan is regarded as “fake.” Meanwhile, #CharlatanDuchess has been used around 1,600 times within Meghan Markle conversation since the beginning of the year.

The #Megxit conversation is primarily driven by women, with around 75% of gender-categorized authors using the hashtag registering as female. Also, the strongest use of the hashtag is coming from the US, not the UK where she now resides.

Of course, not everyone who tweets #Megxit supports its sentiment – many people who have tweeted it are expressing their dislike for it. That said, a whole lot of them are very negative about the Duchess. Here are some of the accompanying hashtags to #Megxit to give you an idea.

Popular hashtags within the #Megxit conversation

Amid all the nastiness are some pretty distasteful comparisons of her to Princess Diana. To give you an example of the malice, one now unavailable tweet (retweeted 35 times) read: “It is an insult to Diana’s memory to compare #MeghanMarkle with her. (3) Diana was only 20 years old, shy, virgin and worked as teacher and nanny. She didn’t have experience with press and media. Meghan is a 36/37 years old cable actress divorcee. #megxit”.

Among the above hashtags you’ll spot a few of the conspiratorial keywords we’ll be exploring next – #fakepregnancy and #moonbump.

Let’s get to the most prominent conspiracy theory around Meghan – a lot of people seem to believe that she is not pregnant.

There’s a lot of speculation around her pregnancy, and it’s something we’ve covered before when it was announced. It all seemed pretty innocent. 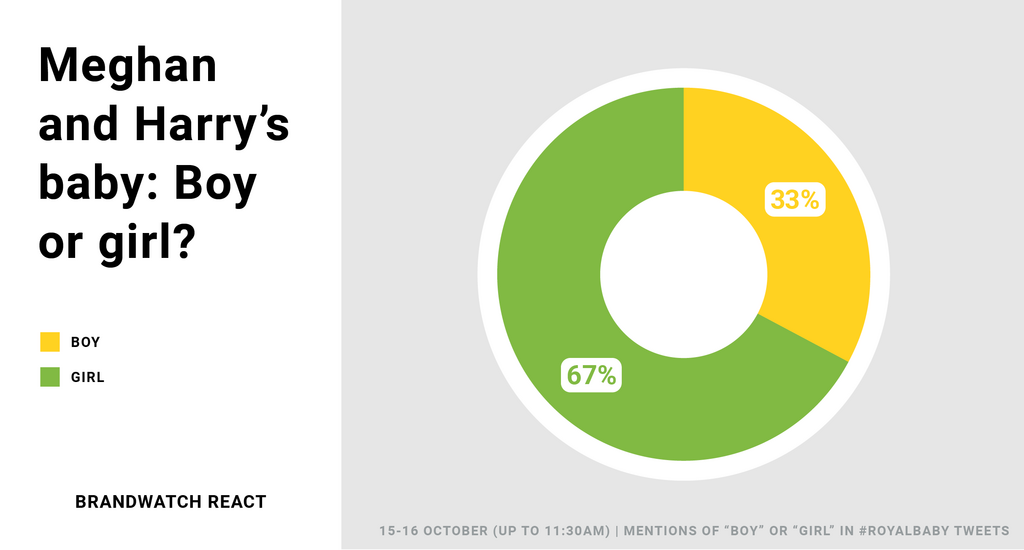 More recently, it feels like the tone around Meghan being pregnant has changed, with 16% of mentions of Meghan’s pregnancy now including terms related to it being fake.

Here’s a look at the key topics within those mentions around the pregnancy not being real.

Keywords within mentions of Meghan Markle's pregnancy being fake

To explain ‘Moonbump’, the mentions refer to a UK-based company that makes fake pregnant bellies for actors.

Brandwatch’s Reach Score estimates that around 1.5 million people have seen the discussion around Meghan and “moonbump” on their timelines since the beginning of the year.

There’s a lot of nasty stuff when you click through the mentions and read them individually, with many accounts sharing close ups of Meghan’s belly, circling folds in her clothes and labelling them as “proof” that she’s wearing some sort of fake baby bump.

It’s reminiscent of some of the similar criticism Beyoncé received during her pregnancy, which were never actually substantiated.

Using a mix of Brandwatch Analytics and Brandwatch Audiences to identify influential voices, there were two or three accounts I noted down as prominent advocates of the #moonbump theory, and they’ve done a good job of spreading the message.

That said, a lot of the content around the moonbump theory appears to have been removed from Twitter, and one of the accounts I noted no longer exists. That can tend to happen to trolls.

Some social media users have been punished in a very public way for their trolling of the Duchess. The Daily Mail in the UK recently published names and images of people who write hateful things about her – a move that generated a lot of controversy (particularly since the Mail has dished out it’s own share of anti-Meghan content).

Here’s one of the most popular tweets about Meghan Markle this year, commenting on the Daily Mail’s coverage:

I’m not sure how to end this piece of analysis. A lot of what I’ve seen scrolling through the anti-Meghan mentions has been nasty, unfair, and in places upsetting. Of course this kind of conversation is in the minority, but it’s still grim to behold. It’s even more grim to think that she’s by no means the only high profile person to receive this level of scrutiny.

What’s missing in these mentions is why Meghan Markle deserves all the hate. For all the dubious “proof” that she’s faking her pregnancy and the insults being levelled at her, there’s not much I can see that explains why people dislike her so much. Perhaps that’s because the underlying reasons go unsaid publicly – Meghan Markle has joined the royal family, the epitome of the establishment, as a non-white divorcee with a passion for supporting demonized communities. She’s different, and maybe it’s that and not the way her clothing folds around her belly that’s given way to the disgusting vitriol around her.