The Emotional Toll of 2020: People Are ‘Over’ This Year

This year has been non-stop with the major and distressing events, especially compared to previous years.

Everyone is under an abnormal amount of pressure this year, and people are taking to social media to express it.

But just how much more are we “over” 2020 compared to previous years? We decided to investigate using our Consumer Research platform.

We looked at English-language mentions relating to being “over” this year and compared them to the four years prior. 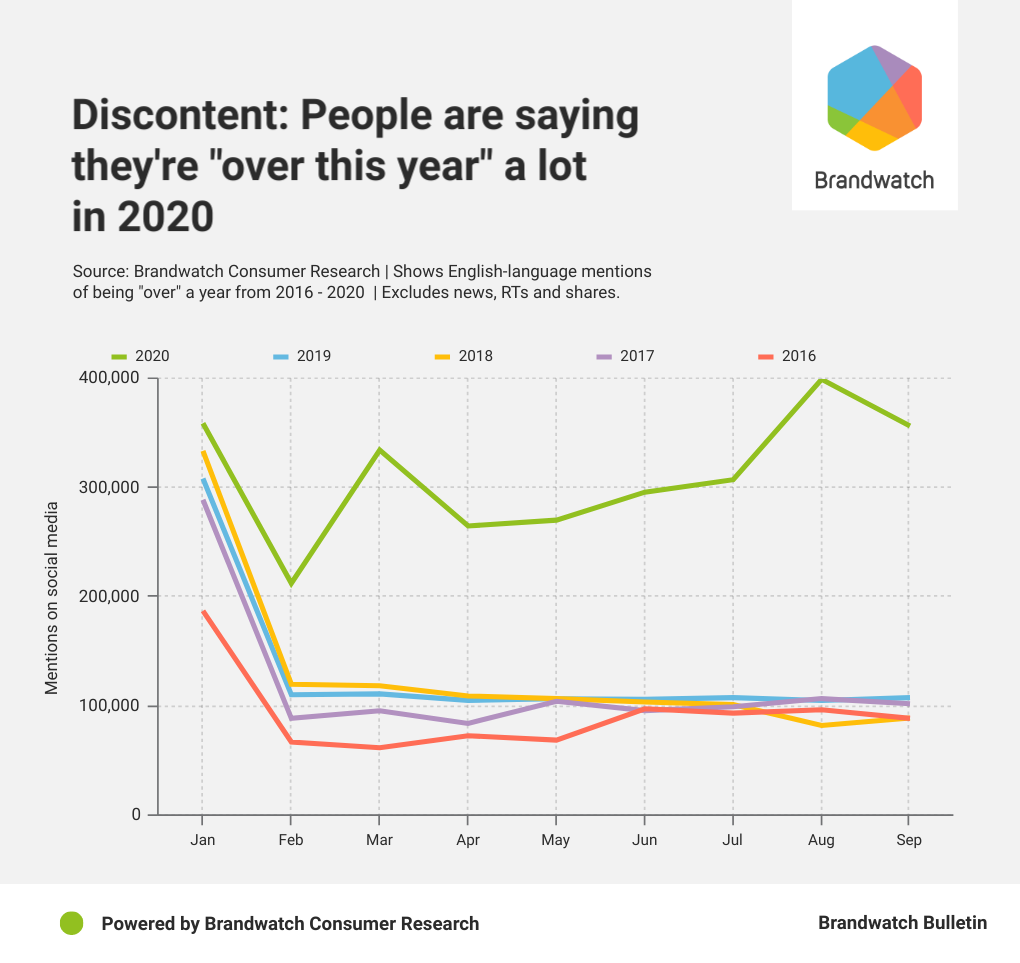 Between March and September 2020, we found 2.2m “over this year” mentions, with August and September seeing the most. Compared to 2019, these types of mentions were up 195% – there’s no denying a significant increase in people being flat-out over it this year.

Unfortunately, we anticipate that this discontent will continue to increase as the next three months of 2020 drag on – we still have the the US election and Brexit to deal with.

What makes this year worse than others?

It turns out that there are quite a few reasons.

2016, the year characterized by a long list of high-profile celebrity deaths, dominated mentions about bad years even when it was over. The deaths of Carrie Fisher, Prince, and George Michael, among others, all affected people deeply. When the year was over, many people continued to claim ‘it can’t be as bad as 2016’ when times were tough.

Looking at what’s got people saying they’re ‘over 2020’ specifically, the issues were a mix of worldwide events and US politics. Here are some key themes in the “I’m over 2020” conversation so far this year:

This year in emojis

We don’t often explore emoji usage, but we found a fascinating contrast in our analysis.

In the slider below, on the left we have the top emojis used in “I’m over this year” conversation from January 2016 to December 2019. Among the negative, we see celebration, we see love, and we see positive expressions.

On the right which shows the top emojis in the conversations we studied from January 2020 to September 2020, we see a much more prominent crying face, angry faces, and more negative expressions.

2020 emojis in 'I'm done with this year' conversationa

People are stressed and upset with this year. But, unfortunately, we can’t turn the clock forward or backwards. For better or worse, we’re all in this together. Empathy is key for all online communication at this time.