The Brandwatch React team delves into an ocean of waste plastic data to discover what consumers think of the problem and how they are holding brands to account on the subject.

Plastic has been on our screens a lot recently, whether it’s in the news or in our social feeds.

Plastic rushing through rivers. Plastic killing whales. Plastic wrecking sites of natural beauty. The damage packaging and plastic bottles can do is illustrated with horrible visuals, and images are powerful in bringing about change.

Last week the Brandwatch React team were sent a Twitter request from a good friend who wanted to read about what the social data says about plastic and, with a staff trip to help clean up Brighton beach coming at the end of the month and Earth Day just around the corner, we thought we’d oblige.

@BW_React any chance of a data story about the rise in awareness around plastic pollution please? Did Blue Planet II play a part?

A delve into the great ocean of plastic pollution data ensued.

Discover how consumers are approaching plastic waste during the pandemic

Plastic, plastic, everywhere; For just a drop to drink.

Conversation about plastic is rising. We looked at historical tweets surrounding plastic waste, plastic pollution and other related key words.

Conversation so far this year in Q1 is more than double the size of what it was in Q1 2017. 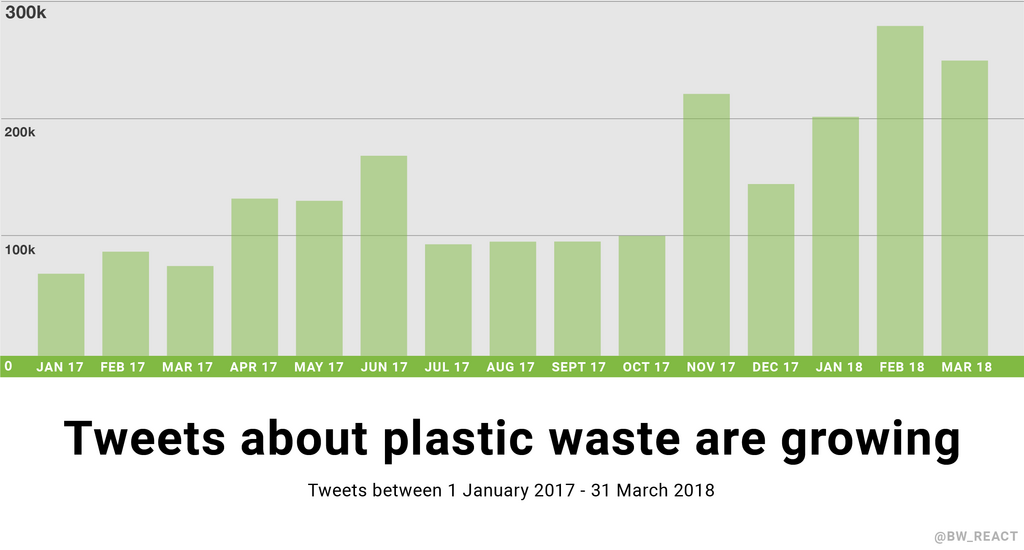 Not only are people talking about the problems plastic causes, but they’re googling the topic more, too.

Women are talking about it more than men, with about 56% of gender-categorized authors involved in the conversation being female between 1 January 2017 – 31 March 2018.

What’s behind the boost in plastic interest?

There’s no arguing about plastic doing damage around the world, but there are plenty of other things that do harm to our environment that aren’t such a hot topic. What’s special about plastic that’s getting people talking?

Getting people interested in environmental issues is no easy feat, but we found a couple of trends that have got plastic to the front of people’s minds.

In late 2017 the BBC aired the hotly anticipated Blue Planet 2  – an incredibly show narrated by the legendary Sir David Attenborough.

The much loved ocean show did not disappoint and bought the devastating impact of plastic waste on to the screens across the world.

It did so well that it appears to have created double the amount of Twitter conversation about plastic waste than Greenpeace did in the time period we measured. 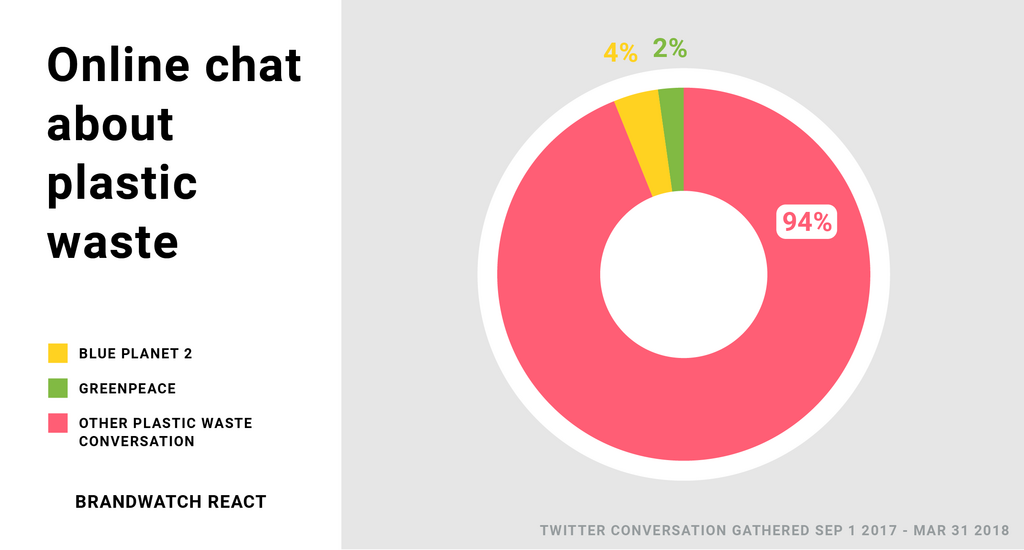 a mother whale lost her baby due to plastic pollution and carried her baby’s dead body with her for days before giving up and we can’t even carry our plastic to a recycle bin https://t.co/g1jZcsDXhZ

That’s not at all to say that Greenpeace is doing a bad job. They’ve had multiple significant spikes in conversation surrounding their campaigns around plastic.

People seem to really love a joke about why supermarkets waste plastic by wrapping up items with their own natural packaging like oranges and bananas.

A now suspended account tweeted this joke, with the subsequent retweets causing the biggest spike in plastic waste conversation that we found since January 2017.

Want to get people to care about your cause? Use ironic humour and show how wildlife is suffering because of what you’re protesting against and you’ll start a revolution.

Plastic free challenges have been a new favorite feature on big news sites, as well as becoming a popular hashtag.

A sea of plastic bottles, cutlery and polystyrene plates has been found floating in the Caribbean.
A New Year’s resolution to all of us – cut down on plastic.
Via @bbc5live. #plasticfree #plastic #ThursdayThoughts pic.twitter.com/2sarVxHTOn

Will brands listen to consumers who are concerned about the impact of plastic on the environment or even seeking alternative products with more sustainable packaging?

Brands are being called upon to make changes

Plastic making its way into the sea, for example, presents moral questions for both people and organizations. People are often guilty of not recycling their single-use plastic packaging. But organizations are also guilty of choosing to manufacture their packaging from plastic in the first place. Plastic is a convenient option for both people and organizations but that convenience comes at a terrible price if the waste it produces is not handled appropriately.

Within the plastic waste conversation, we used Brandwatch’s new Entities feature to find organizations being mentioned most. Among bodies like the World Economic Forum, the European Union, and charities like Greenpeace we also found a whole lot of brands.

Coca-Cola made up a significant chunk of the organization conversation, with around 3,800 mentions dating back to the beginning of the year. Within the Coca-Cola mentions one of the most prominent topic was a petition calling for them to do more around plastic waste reduction, with nearly 80,000 signatures at the time of writing.

In defence of the company, they have pledged to cut plastic packaging waste.

At the same time as people complaining about organizations’ complicity in the damage plastic can do to the environment, much of the conversation promotes good work done by companies to make things better. Here’s an initiative from Tesco which highlights vulnerable sea creatures and rewards shoppers for using recyclable bags.

Its not just text mentions that brands can get the message from.

Packaging often looks great in marketing material and on the shelf, but looking at where it ends up after consumers are done with it can paint a different picture of its effect on the world.

With Brandwatch Image Insights we looked at logos for popular brands of drinks that come in plastic bottles. A search among all those pictures for the word “waste” quickly surfaced this image. 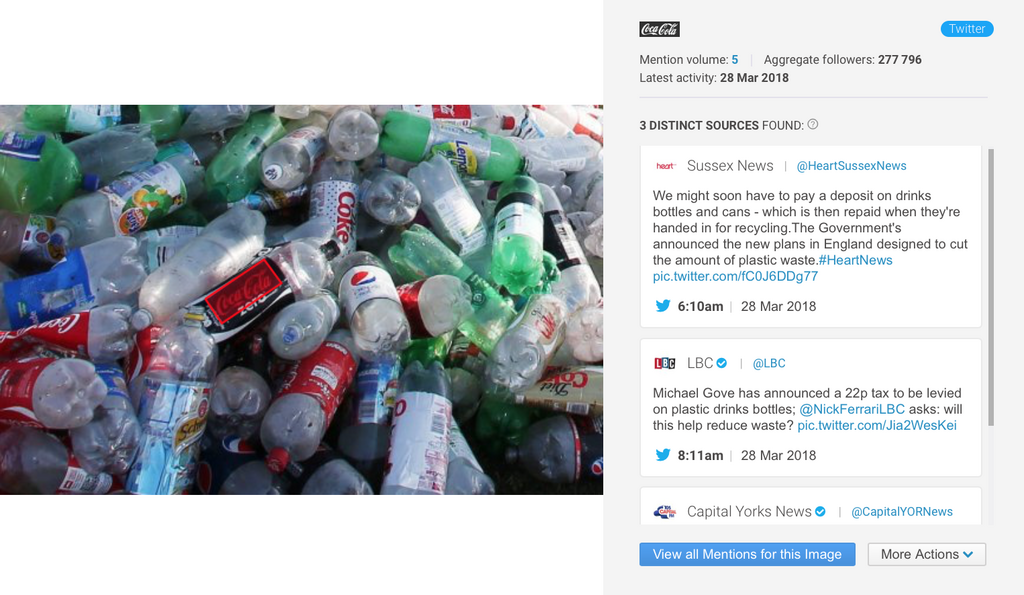 This probably  isn’t a situation you want to see your logo used in.

Photographs that show discarded brand packaging might not be protesting its destruction – it could just be on the floor in the background. Either way, visual depictions of a damaging legacy of product packaging isn’t the way that brand managers tend to want their logos appearing on the internet. As non-biodegradable trash builds up, brands who mass produce products with plastic packaging can expect to see more and more visual content that sees their logos littering the ground or ocean. Image Insights can give brands a potentially stark reminder of what happens to their branded packaging after use.

Measures like encouraging customers to recycle (perhaps by making clear on the packaging the materials used so it’s easier for consumers to know if something is recyclable) and reviewing materials used are one way brands may begin to start clearing up this mess.

I believe that what we’re seeing in the data is a rare but encouraging point of union from people across the internet and globe, coming together to voice concerns about a threat to the natural world.

This is a problem that everyone can do their bit to solve, but brands should be very aware that they are being held to account on this and by getting involved early they could reap some really positive social rewards.

A campaign from Adidas that involved making shoes from recycled plastic was one of a few ways that we saw a brand gaining prominence in the plastic waste conversation in a really positive way.

It’s not too late for brands to get involved in this conversation and make bold steps that can win wider customer favor and, with the conversation around plastic waste growing, inaction could do harm both to the environment and their reputation.

Discover how consumers are approaching plastic waste during the pandemic.