Nothing gets laboriously crafted fake nails tapping on bejewelled iPhones faster than a fashion week.

As the New York Fashion Week party shuts down and London kicks off in impossibly high stilettos, we took a look at how the Big Apple fared on social, and what we might expect from London.

The most sought after seats in the house at NYFW got a predictably enormous reaction on social as the list of celebs spotted on the front row.

“Front row” was mentioned around 15k times throughout the week and as the celebrity studded shows commenced some big names started to jump out in our topic analysis.

While Rihanna seemed to be the shiniest star of NYFW (more on that later), a closer look reveals some more big names.

Harry Styles managed to sneak into the mix after it was rumored that he’d be making an appearance at one of the shows. Twitter obviously went crazy, and he subsequently did not show up at any of the NYFW events.

Hollister also made a terrible joke about how he had the most “stylish” name which ignited a lot of love from pun loving One Directioners.

The most *stylish* name this week — Harry Styles. ? #nyfw

Meanwhile, Kanye West’s unguarded claim that he is 50% more influential than any other human being seems to be disproven by the data this time around. Sorry Kanye.

While designers aim to make a statement that gets the fashion elite talking, impressions can measure the reach of a message across social to the tweeting masses.  The more times you’re retweeted or mentioned by influencers the bigger your impression count is going to be. We took a look at the accounts making the most impressions during NYFW.

Interestingly, despite Kanye’s hyped up YEEZY Season 3 show, the megastar didn’t get a look in on the list. Rihanna’s FENTY PUMA collection debut, however, is definitely one of the biggest wins on social during NYFW. Not only was Rihanna’s Twitter account making the most impressions, her show highlights video was the top shared link for the whole of the week, accumulating over 10k views on Youtube.

Forget the names, what should I buy?

The average shopper might not be able to afford half of the elaborate garments on show at NYFW, so if you’re looking for a simple breakdown on what items of clothing you should be focusing your spare change on this Autumn/Winter this section might be for you.  We took a look at the clothing types discussed most on social within New York Fashion Week mentions and deducted that stocking up on dresses and shoes is the way to go (if you don’t mind being cold). 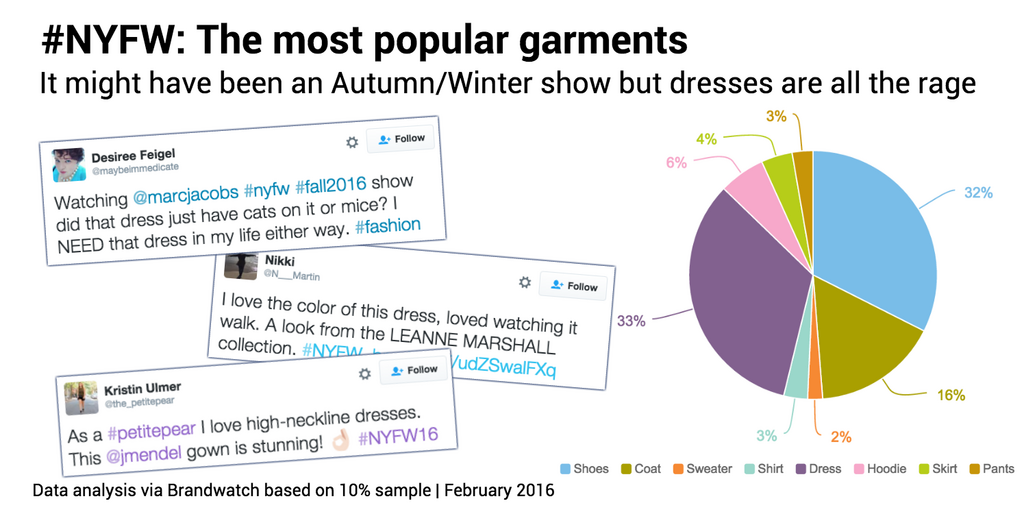 While it’s a little early to come to any big conclusions about who’s winning LFW at social, we’ve found Topshop is steaming ahead as it’s most mentioned sponsor. Meanwhile, @Burberry and @MissVogue UK are raking in impressions on Twitter. Time will tell what drama commences in the rest of #LFW2016.