From Arianna Huffington to Tim Cook: The Most Influential CEOs on Twitter

The Brandwatch React team uses new tool Audiences to find the most influential CEOs on Twitter. Who will take first place?

Technically, anyone can be a CEO. But not everyone can be the most influential CEO on Twitter.

With a business to run and to-do lists stretching the length of a football field, it’s hard to believe CEOs have time to tweet.

The Brandwatch React team decided to use Brandwatch’s new tool Audiences to identify which CEOs are making the biggest splashes on Twitter.

CEOs of all kinds

It’s important to remember before you dive into this list that CEOs come in all different shapes and sizes.

Some dedicate almost all their time to their company.

Others have businesses alongside successful careers as international sports stars or world-renowned rock bands.

Audiences determines an influence score by looking at a number of factors from follower – following ratio, ability to generate engagement and the number of influential people they interact with. It also applies a time decay to engagement, making more recent interactions count more.

The Brandwatch React team searched for authors with “CEO” in their bio and generated a list of the most influential CEOs on Twitter.

So, without further ado, here they are: 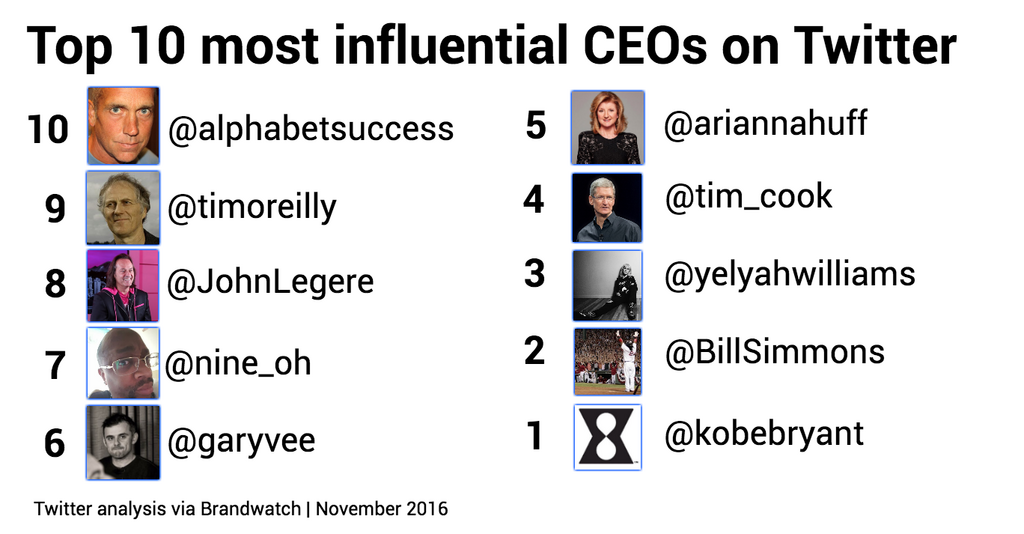 You might have noticed, if you haven’t sent us an angry tweet already, that’s there’s a bit of a divide between the top five and some of the members of the rest of the top 10.

The rest of the top ten aren’t exactly household names…

Let’s take you through the top ten one by one. Somewhat depressingly, there are more Tims than there are women.

Tim has 412k followers and, according to his Wikipedia page, he’s “an American author, keynote speaker, angel investor and entrepreneur”. He’s also CEO of Social Jukebox.

He loves a good quote.

Nothing is more surprising than the easiness with which the many are governed by the few. – David Hume #quote pic.twitter.com/dpf6dVW11m

O’Reilly Media CEO Tim O’Reilly has 1.98 million followers but follows just 1,646 accounts (the Brandwatch React team is privileged to be one of them).

He speaks his mind and a lot about tech.

Perhaps the wildcard of the group, Producer 9-0 describes himself as “CEO No Limit East. Award winning music producer, author & more.”

With just over 1 million followers and tweeting prolifically, @nine_oh is at number 7 on our list. He tweets about music and the latest news.

Justin Bieber cried during a performance of "Purpose" in Germany: https://t.co/1lG1tEpZra

Vaynerchuk is CEO of Vaynermedia and boasts a solid 1.35 million followers.

He also tweets uplifting messages that his followers really respond to.

Arianna Huffington is founder of the Huffington Post and, more recently, CEO of Thrive Global.

She has 2.56 million followers and shares links from all around the web (although many of them are from Huff Post).

Anyone could have predicted Tim Cook would make the list, and with 3.89 million followers he certainly deserves it.

He loves to tweet about Apple products, staff and customers.

Can't wait for our customers to try the all-new MacBook Pro and revolutionary Touch Bar! pic.twitter.com/xMEeIirwEp

Hayley Williams of Paramore fame is a surprise but welcome addition to the list. She actually has more followers than the band itself.

Anyway, Williams is Founder and CEO of goodDYEyoung, purveyor of funky hair colors.

With 5.28 million followers, Simmons is a big hitter in Twitter land. He’s also CEO of The Ringer.

New column: I wrote about LeBron, the red-hot NBA and the upcoming season for @ringer https://t.co/1QZZi2xQeT

Perhaps more famous for his basketball career, Bryant is also a successful businessman.

Announced @BryantStibel investment platform to the world today with my partner @Stibel and our team on the @NYSE pic.twitter.com/Yy2yF34INH

Sadly our own CEO, Giles Palmer, didn’t make the top ten this year. Perhaps he ought to take up basketball.