The Brandwatch React team delves into some influencer data to determine the most influential men and women on Twitter. Find out who gets the top spot.

Twitter is a vast web of social spiders and working out which ones with the sharpest fangs and ability to catch the most bugs is the challenge.

Identifying influencers on social media got easier when we released our new tool, Audiences. It can analyze bio, tweet or demographic information to identify accounts with a strong influence in both niche conversations and wider debates.

This can be handy if you’re a CPG brand looking for food influencers or a music label looking for fans accounts that unlock the audiences you’re looking to target. (You can read more about the wonderful things you can do with it here).

The Brandwatch React team decided to put Audiences to the test to determine who are the most influential men and women on the whole of Twitter.

Will Trump beat Obama? Will Adele beat JLo? You’re about to find out.

Audiences determines an influence score by looking at a number of factors from follower – following ratio, ability to generate engagement and the number of influential people they interact with.

Brandwatch uses a vast database of names to understand the gender of the person behind the account. Where the algorithm isn’t sure it doesn’t assign a gender.

Starting with the boys, we’ve got a whole range of big names in the running.

Actors, comedians, politicians, tech giants and sportsmen competed for the title but it was Justin Bieber who took number one.

Moving on to the ladies, we’ve got another interesting mix of people – musicians, politicians, talk-show hosts, actresses…

It’s Jennifer Lopez who made it to top spot, though. 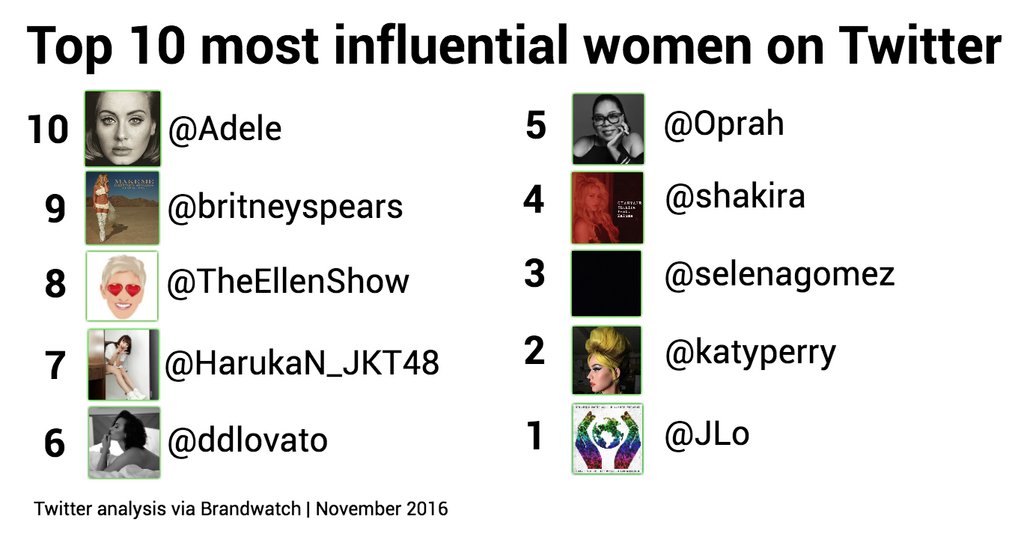 What can we learn from the most influential men and women on Twitter?

Firstly, music is the path to go down if you’d like to gain a huge following. Of the thirty most influential men and women there were 19 people with a musical career, with a slightly higher proportion of musicians in the female list.

Secondly, Hillary Clinton doesn’t make the top 10 most influential women. We’ve previously found that Republican influencers are slightly more influential than Democratic influencers according to the criteria we use. Assuming Trump generates the same levels of engagement Obama does as President we should expect him to climb further up the male list in the coming months and years.