Coffee, the lifeblood of a productive workforce, is central to our very existence.

Well, you’d think so if you spent a while goggling at Twitter’s obsession with it.

I'm literally at @Starbucks so much that I'm surprised coffee doesn't course through my veins yet.

US-based tweeters in their tens of thousands take their love for, dependence on, or complaints about coffee online every day.

We tracked 950,000 tweets over the month of March to find out what online coffee conversation looked like, and the results were surprising.

All data in this blog post applies to US-based coffee tweeters apart from where we have added comparison charts with the UK. If you’d like more information on the data please email us at [email protected]

Wake up and smell the social data.

California: The coffee capital on social

Looking at data for states we found that, perhaps predictably, the highest concentration of coffee mentions came from California.

Hover over our interactive map to find out how much your state loves tweeting about coffee.

With around 30k tweets being posted about coffee per day, trends in coffee tweeting times are fairly easy to spot.

Over the whole of March, we found that mentions peaked, on average, at 11am EST with over 60k tweets being registered in the hour leading up to it over the month.

The sharpest rise occurs between 7am and 8pm, just as people are getting ready for work. We’d predict that the 11am peak is a mix of East Coast workers grabbing their 10:30 fix and the West Coast waking up. 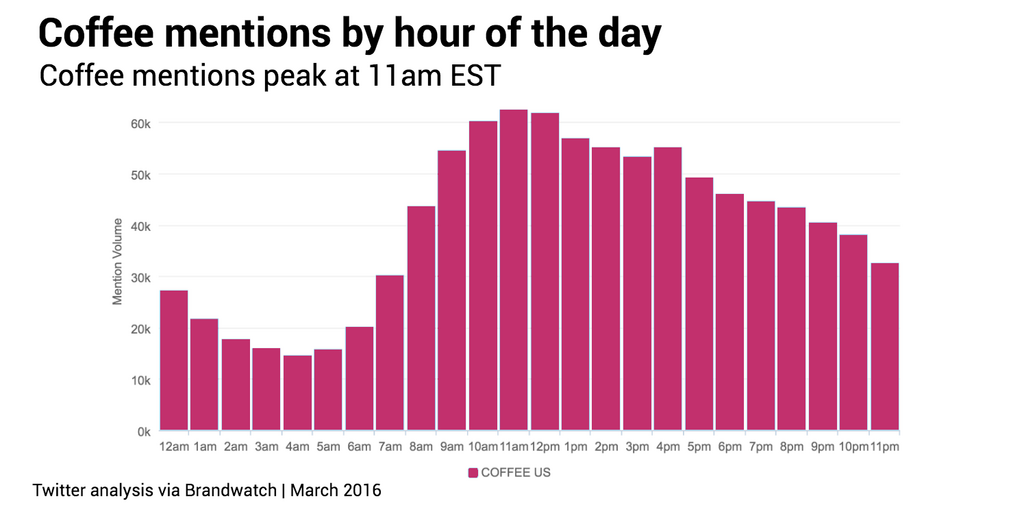 Comparing this the the UK there are some small differences. The graph follows a similar curve but with a far steadier pace between 7 and 10pm.

Strangely, female tweeters also celebrate a second peak at around 4pm, something that barely registers for males.

Overall, the gender-categorized Twitter conversation was made up of 63% female and 37% male tweeters. 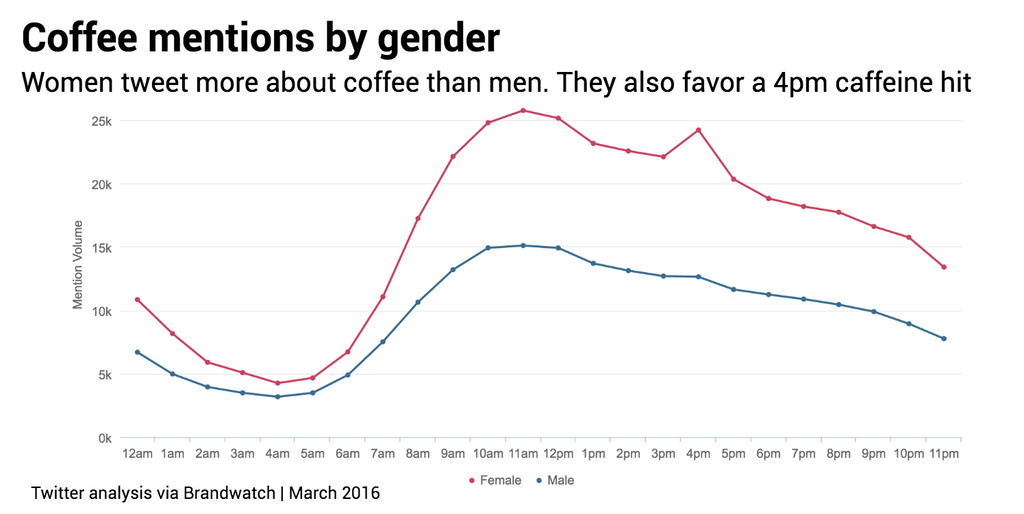 The next surprise we found was when we looked at the days of the week.

While Sunday and Monday might strike you as prime coffee tweeting days, they’re actually fairly low scorers in relation to midweek days, with Thursday being the most popular day to tweet about your caffeine related escapades. 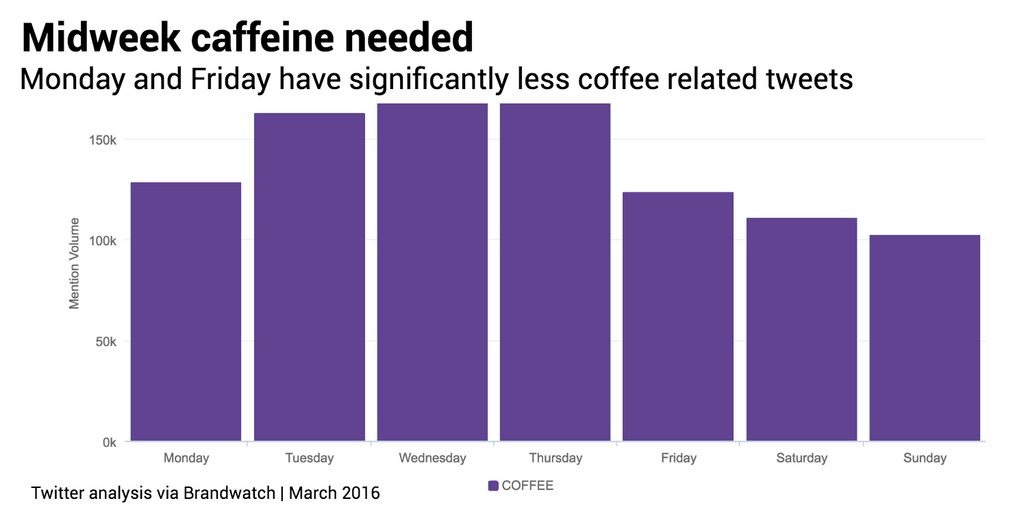 Interestingly, we also ran some numbers on coffee mentions in the UK and found that it was Friday that was the most popular day for coffee mentions, while the Saturday also got a significant amount of mentions.The need for a mid-week buzz certainly isn’t as evident in Britain. 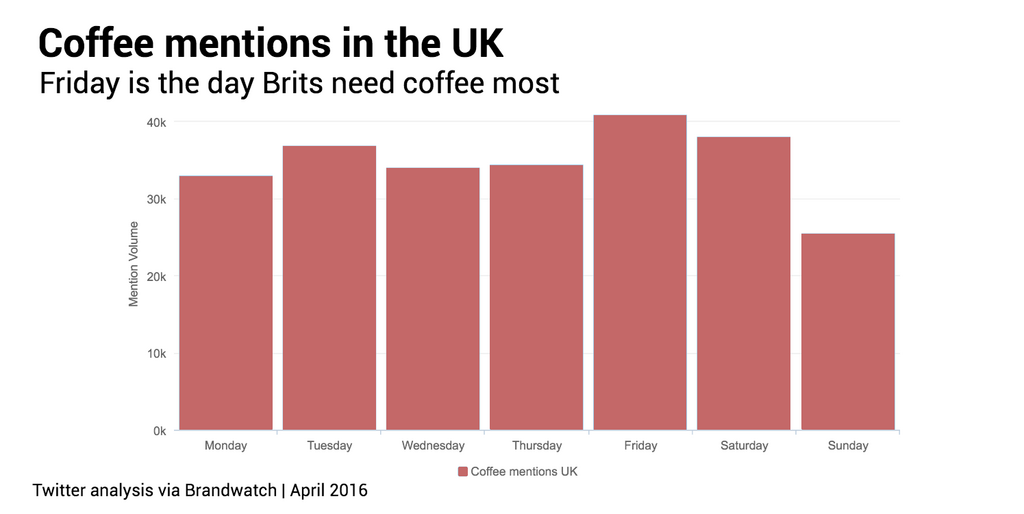 We decided to take a look at what kinds of coffee people favor most. The problem with that was variety. As with many things these days, there’s no one-size-fits-all when it comes to hot beverages. There aren’t even just a few sizes.

As coffee shops pander to the every whim of flavor, temperature and health conscious consumers, mapping the coffee conversation becomes complex.

Add on top of that people’s difficulty when it comes to spelling fancy coffee words (we found 519 mentions of “expresso”) and it becomes even more so.

Despite the hardship, here are the coffee types and flavors we found people tweeting about. 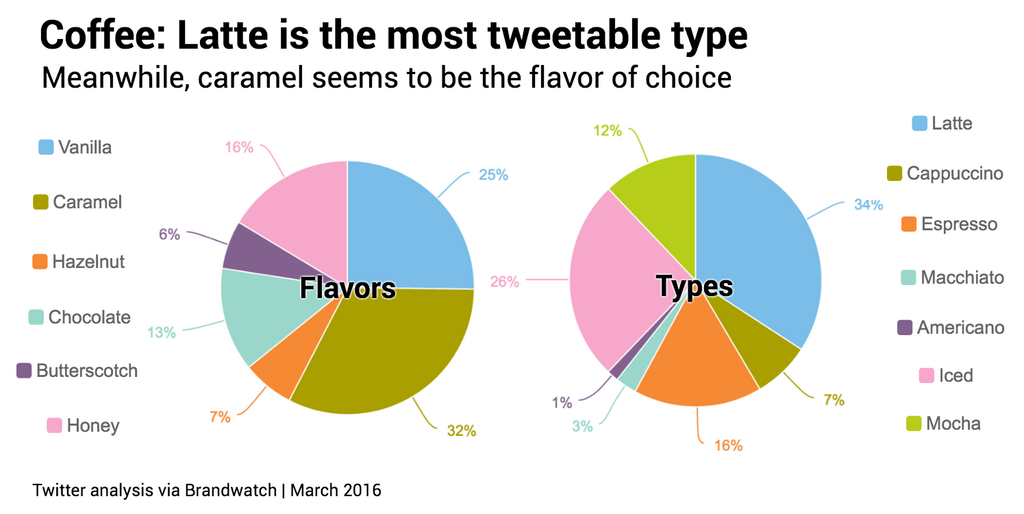 Comparing this to the UK, we also found that latté was the top mentioned type of coffee, while espresso came in close second. For flavors, it was again caramel that got the most mentions, with vanilla coming in next and butterscotch dead last with just 64 mentions over the entire month of April.