US Election 2020: Brandwatch’s Last Data Drop Before the Election

The final results from our Brandwatch Qriously poll are here.

Using Brandwatch Qriously, we surveyed 5,409 adults in America from October 29 to November 1 2020. The above results come from the 3,505 respondents who say they are likely to vote or have already voted in tomorrow’s election. 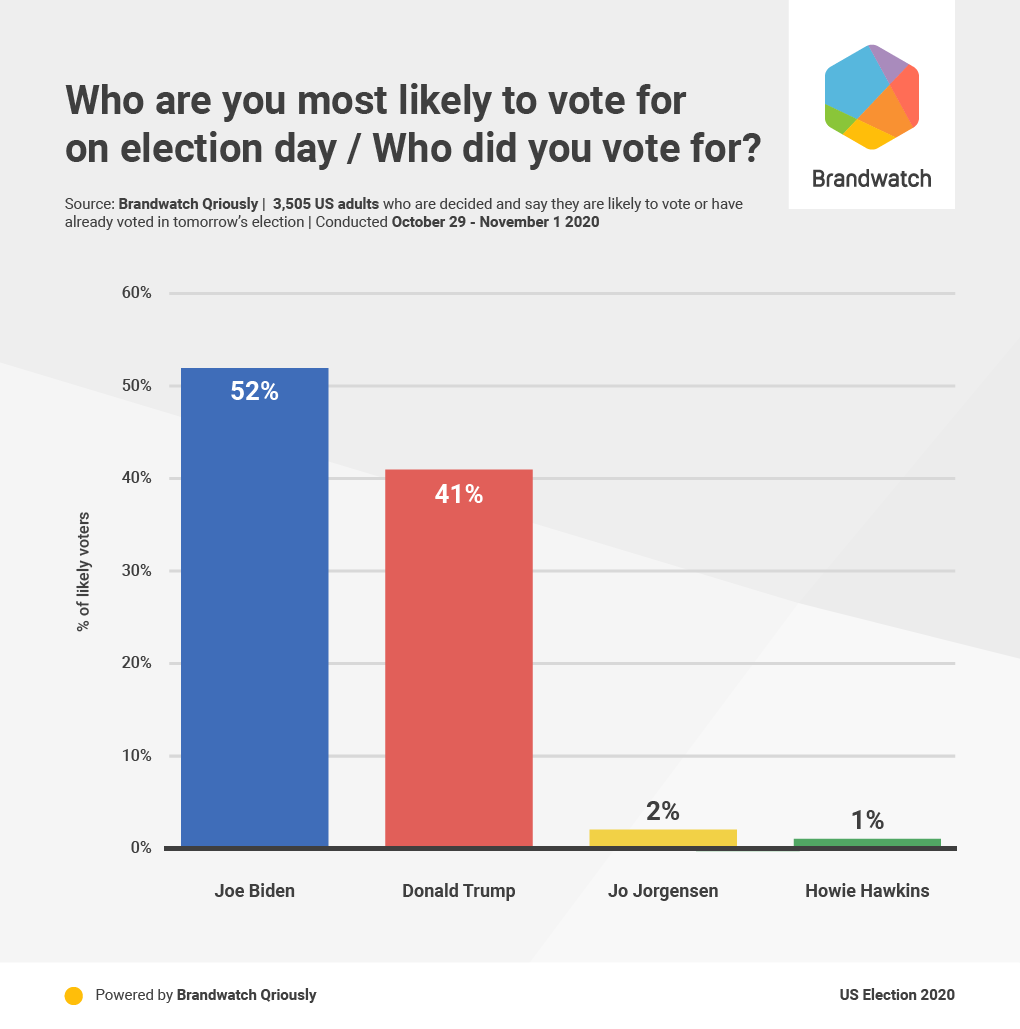 Biden leads with 52% of decided likely voters supporting him against Trump’s 41%, a margin of 11 points. This is a very strong lead at the national level and, based on 538’s analysis, would almost definitely mean a Biden presidency.

We should still note that this lead isn’t uniform across the country. Within swing states, the margins are much smaller. And while the big picture is very positive for Biden, it doesn’t mean there won’t be any upsets.

When we look at our data by demographics, there are few surprises. But if we compare our age data to the Pew Research Center’s on the 2016 election, we can see signs of a shift. 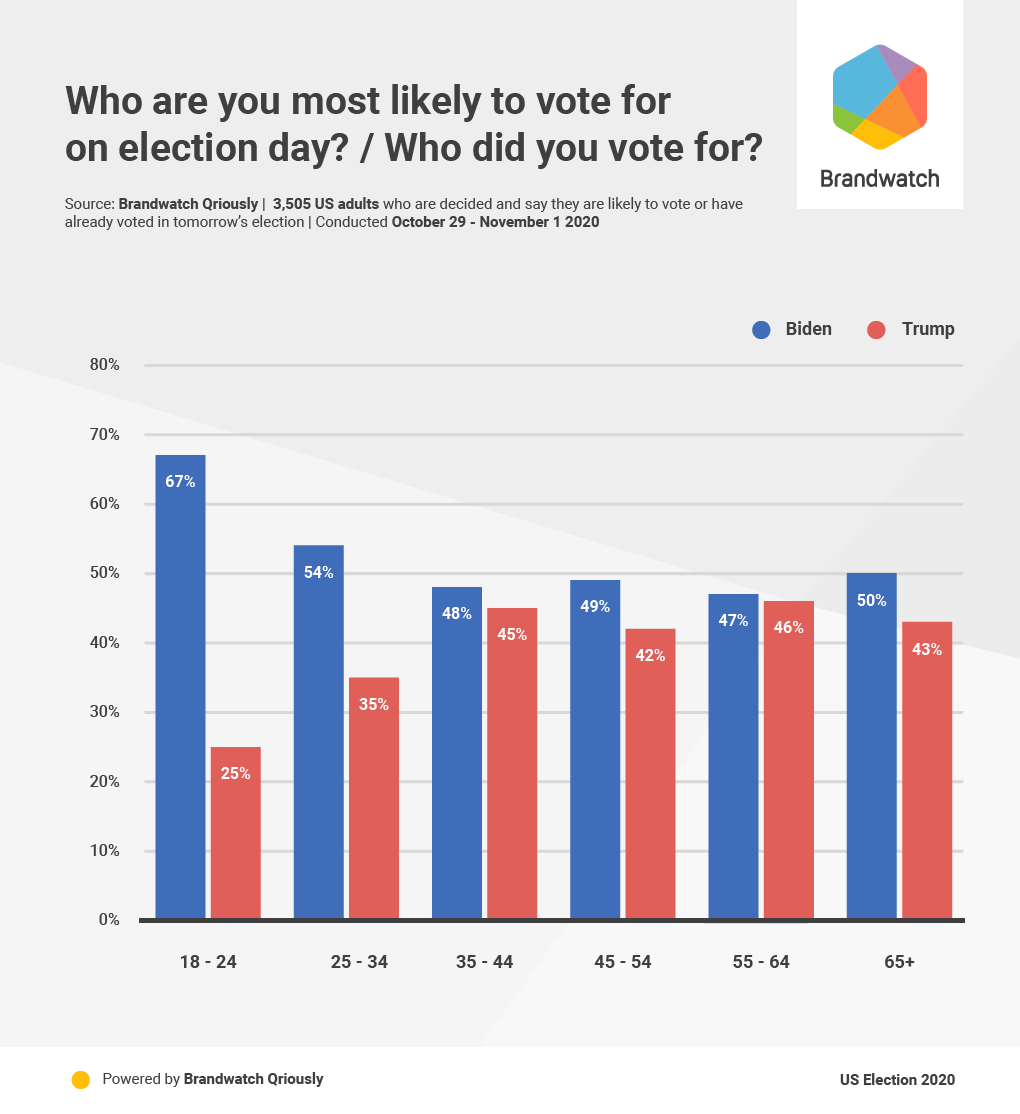 In our data, Biden is significantly ahead in the 18-24, 25-34, and 65+ age groups, while Trump doesn’t come out ahead in any of the age groups. Compared to 2016, support in the 65+ category is nearly reversed. Trump won this group by nine points four years ago. Our data suggests now he’s likely to lose among these older voters by around seven points.

Subscribe to receive our final US Election Bulletin. Get the most fascinating post-election insights straight to your inbox

This election has seen record early voting, and is on track to have a massive overall turnout. But due to the nature of how some states count early votes, we may not know who has won in some places until later in the week—or possibly even longer, if any legal wrangling takes place.

This presents a problem. First, people who vote early tend to vote differently to those who vote on the day. 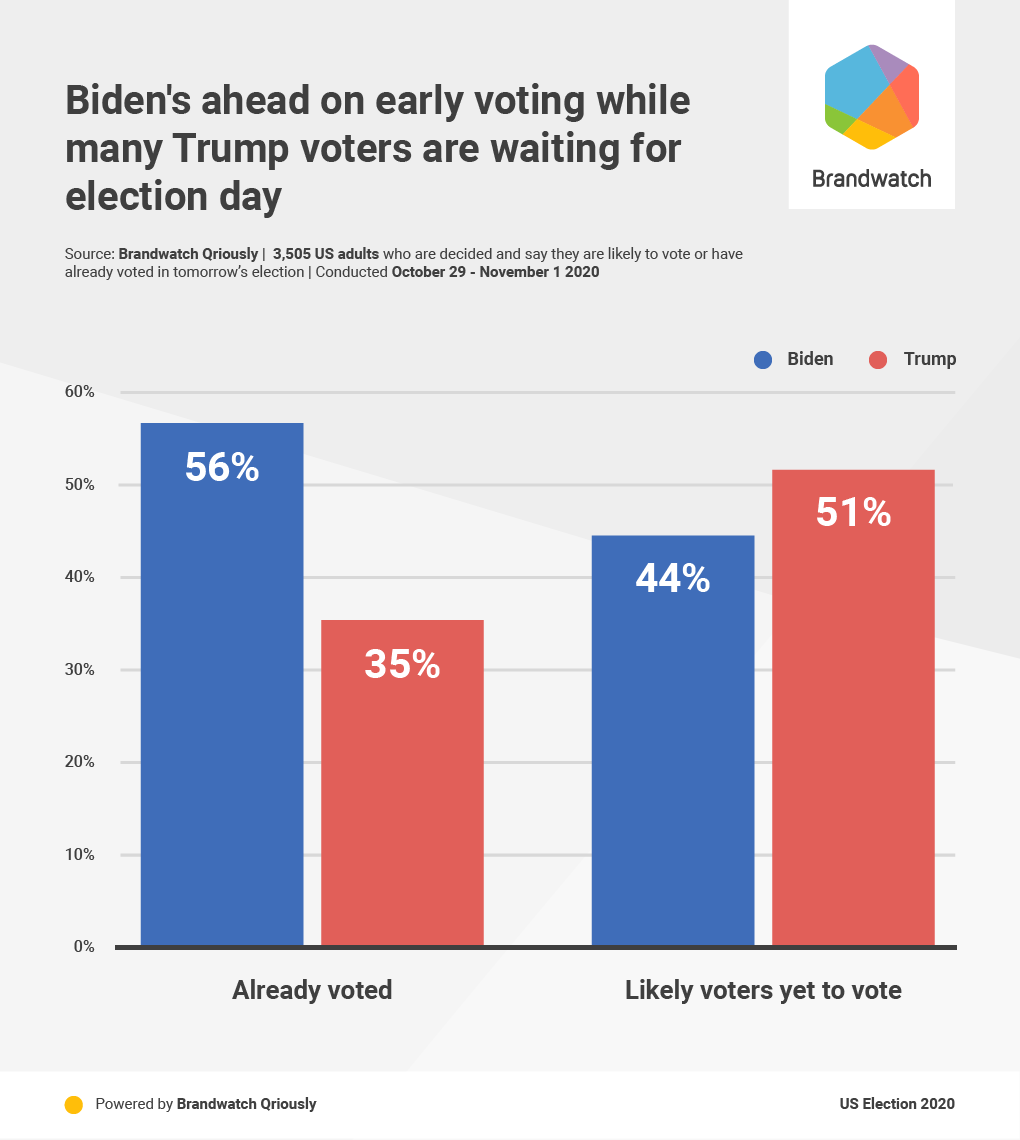 Different states have different rules on how to count early votes. In places like Michigan and Pennsylvania, which are key battleground states, they won’t start counting till election day.

Thanks to the unprecedented number of early votes, it’s likely they won’t have a final result until the end of the week. That’s not to mention the other states where mail-in ballots received after November 3 but postmarked before are still counted.

For this reason, we can expect to see a pattern of “blue shift” in those states which count mail-in ballots from election day onwards. This means we could see Trump’s chances looking rather good early on, with Biden’s numbers improving as more early votes are added to the tally.

In normal times, this would just mean a delay in a winner being declared. But with the President himself calling for the election to be wrapped up on November 3, things could get very complicated, very quickly.

As we do every week, we’re releasing our polling data along with our bulletin. If you want to have a dig around or do your own analysis, you can find our tables and the raw data here.

More about the data

Detailed tables and raw data are published here. Data is released under the Open Data Commons Attribution License (ODC-By) v1.0. If you are publishing or using this data you must give attribution to Brandwatch Qriously.

Brandwatch Qriously uses river sampling and delivers market research questions to respondents via ads on mobile device apps. The proportion of respondents recruited in a particular app is determined by the demographic of its users, which allows for the collection of representative samples. There are no incentives, meaning participants are more likely to provide candid and accurate responses. Brandwatch Qriously has successfully predicted nine major elections. It offers an accurate, fast, and reliable way to conduct market research, even within hard-to-reach groups and countries.

About the poll: 5,409 adults aged 18+ nationwide were surveyed from October 29 – November 1 2020. The size of the subsample of decided likely voters was 3,505. Data was weighted to be nationally representative in terms of age, gender, education, race, geographical region (census division), and NCHS urban/rural community type, using data from the Census Bureau’s American Community Survey (ACS), as well as 2016 Presidential election vote (or non-vote). Targets for 2016 vote were calculated using results from the Federal Election Commission, population totals from ACS and mortality data from the National Centre for Health Statistics. The margin of error at the 95% confidence level, taking into account the effect of weighting, is +/- 1.8 percentage points for estimates from the full sample. For the subsample of decided likely voters it is +/- 2.2 percentage points. Sampling error can be larger for subsets of these samples. In addition to sampling error, all polls are subject to a range of other potential sources of error. When percentages do not sum to 100% this is due to the effect of rounding.

Don’t forget to subscribe to our final US Election Bulletin to get the most fascinating post-election insights straight to your inbox.