The Sneaker Brands Battling for Your Heart and Sole

Sneakers may conjure up images of dirt-encrusted, formless shoes with tattered laces worn to the gym or for taking the dog out on a walk. Some brands are trying to kick that association to the curb with sleek sneakers made from high-quality materials. Allbirds, Greats, and Koio want to prove that sneakers can serve as a casual-but-presentable footwear choice.

But is there room in the sneaker market for sensible shoes that are also fashionable? And, if so, what are consumers looking for in this new type of footwear?

By looking at the social media conversation, we are able to track the rise of those three sneaker brands, learn about the differentiating factors for each brand, and discover their unique consumer demographics and affinities. Retail and fashion brands can gain valuable insight on what consumers are saying about their products and learn more about their customers.

To start, let’s look at how the overall conversation volume has trended for the three brands since their launches.

In terms of social media conversation volume, newcomer Allbirds has dominated Greats and Koio since July 2016. The Allbirds discussion volume spiked on Mar. 1, 2016, when the brand launched its first product, a $95 shoe called Wool Runner. Reviews were widely circulated on Twitter. The discussion volume decreased from March to May, but rose from May to September.

On Sept 7, 2016, Allbirds raised $7.25 million in Series A funding and offered new shoe colors. People shared the TechCrunch story that announced the news. On Apr 4, 2017, Allbirds generated buzz when it launched a new shoe called the Wool Lounger. Their launch was met with a positive response, as many consumers praised the shoe’s comfort.

Greats experienced a bump in social conversation on March 19, when Business Insider published a story profiling the company.

Koio’s time to shine was Oct 8, 2016, when it collaborated with a tattoo artist for a live sneaker customization event. Its discussion volume in October overtook Greats, but not Allbirds.

The 4 measures of a great sneaker 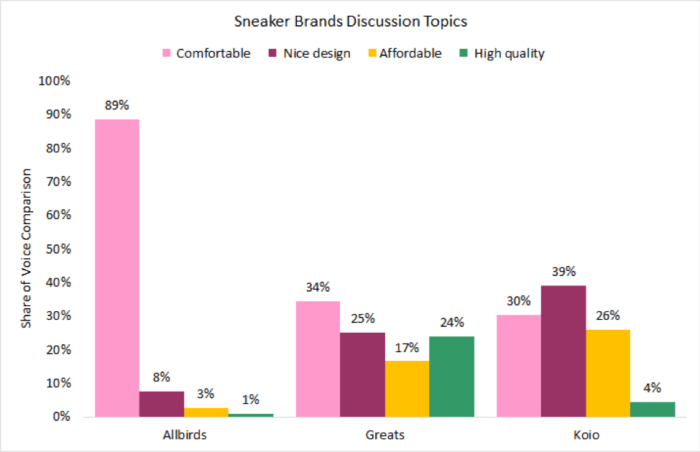 When looking at the discussion for all three brands, some common topics emerged: comfort, design, price, and quality were the most common topics mentioned in the conversations surrounding the three sneaker brands. However, the prominence of the topics differed for each brand.

We decided to look at the sentiment drivers for the most popular brand, Allbirds. Excluding neutral, positive sentiment is higher than negative sentiment by 18 percent.

Top drivers of positive sentiment are eco-friendly, comfortable, and different colors. In a world where consumers are increasingly concerned about how ethically produced their products are, eco-friendly dominates the discussion with 42 percent share of voice.

Top drivers of negative sentiment are expensiveness, unattractive design, and shipping concerns. At $95 for both its signature products Wool Runner and Wool Lounger, Allbirds is not cheap. 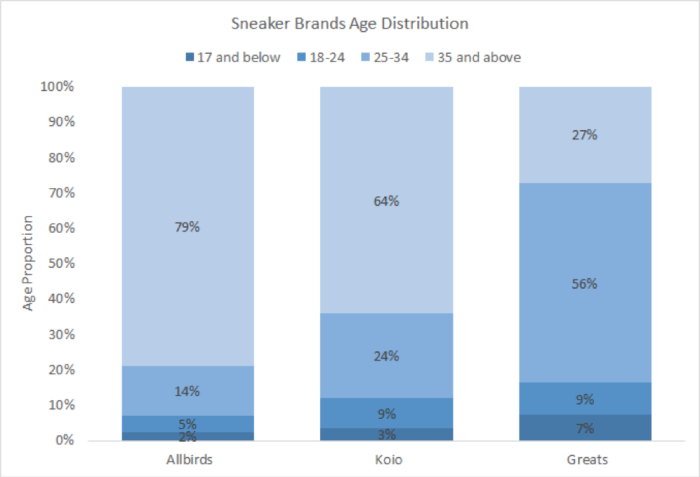 You might expect these three sneaker brands to appeal to a similar audience, but the social data begs to differ. The age distribution for those discussing each sneaker brand varies greatly. Allbirds is popular with an older crowd, with 79 percent of the discussion generated by those 35 and above.

The second most popular is those 35 and above, generating 27 percent of the discussion. For all the three sneaker brands, those 24 and below show little interest compared to those 25 and above.

The differences between the brands aren’t only about age. They also lie in audience interests. Comparing Allbirds to Greats, the differences are stark.

They are also immersed in the startup scene, with interests in innovation, Silicon Valley, and venture capital. They opt to read publications like TechCrunch and are interested in tech giants Apple and Microsoft. Unsurprisingly, the cities that are the most prominent in their affinities are San Francisco and Seattle. Allbirds appears to have a more cult-like following than Greats.

Sneakers have evolved from an athletic shoe to a status symbol: Adidas Stan Smiths can be found in the crowds at Fashion Week. The chic sneaker has reached such high levels of demand that people have written guides detailing the steps to take to launch a sneaker startup. By using social media analysis, we are able to look at which sneaker brands are leading the charge and unearth the reasons why.