React: Delving into the World of Twitter’s Most Powerful Beliebers

The Bieber fandom marketplace is as competitive as it is brutal.

Whether it’s because of his cheesy tunes or controversial shenanigans, Justin Bieber is undoubtedly a polarizing character.

While there is no shortage of hate for the 21-year-old, it’s no secret that his enormous fan base has always got his back.

In fact, enormous doesn’t do justice to just how many people are rooting for Justin on a daily basis.

With a whopping 73.8 million followers, the pop prince is certainly a member of the Twitter elite. Bieber’s own account is currently the second most followed account on the whole of the social network, second only to Katy Perry.

However, while his social skills are obviously impressive, Justin’s own account is just one part of the epic network of fans surrounding him.

His Twitter fanbase is an incredibly complex machine, bringing together a diverse range of people. It simultaneously offers help and support for other fans and fights and bickers over who is more worthy of Justin’s attention.

Each fan account has its own quirks and communities, with tweets ranging from satirical jokes to salivation over Bieber’s latest photoshoots.

To create the perfect fan account there is a lot to think about.

With millions of fans to attract, competition is rife and commitment to the cause must be demonstrated. A follow from the man himself or a long account history are big plus points and are proudly displayed in the bios or usernames of some of the biggest accounts. 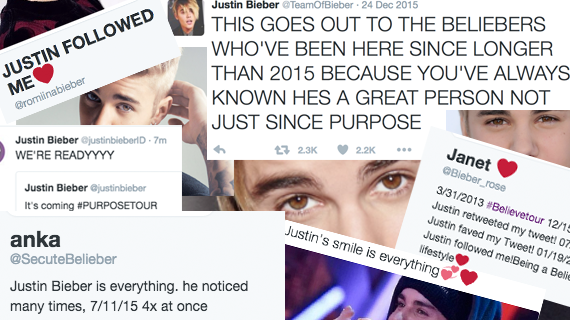 Most influential Beliebers: The countdown

We used Audiences to come up with the definitive Brandwatch React top 10 most influential Beliebers on Twitter.

Profiles with Bieber or Belieber in their bios were ranked according to a selection of criteria that was added together to create their influence score.

While followers, inclusion on Twitter lists, retweets and replies will help, the more influential the people they engage with, the better the score.

Here are the accounts that scored highest.

With an impressive 1.1 million followers, the crew have supported Justin Bieber since 2009.

When people say “Bieber is really good now” and you’re just like “what do you mean by ‘now’?” pic.twitter.com/oOT4Xp96dS

Much like @JustinCrew, @Bieber Army joined Twitter in 2009 and have accumulated over 1 million followers during their supporting tenure.

The page retweets Bieber updates and shares pictures of the star, notably ones that compare him to his early days of fame.

While @secutebelieber was founded a little later than other fan accounts in 2011, this Armenian based fan page has got 368k followers and generates a lot of engagement by sharing pictures and messages of support for the star.

i’ll always be here for you @justinbieber — anka (@SecuteBelieber) January 1, 2015

The impressive online presence of @belieberbabes (which includes tweeting regularly throughout the day) has earned them a following of nearly 700k.

The page posts alerts and pics to keep their followers up to date on all things Bieber.

? JUSTIN WILL BE PERFORMING AT THE GRAMMY AWARDS ON FEBRUARY 15TH! HAPPY SUNDAY, CARRY ON ?

@JBcrewdot.com has gained a decent 373k followers and shares a lot of updates – we counted 80 tweets over a 24 hour period.

It’s also linked to the site http://justinbiebercrew.com/ which appears to be run by Bieber fans hoping to sell merchandise and give to charity. While there’s nothing on sale right now, their influence in the Belieber community could help them spread the word.

Calling itself the main source of Justin Bieber news in Latin America, the site has a solid 359k followers and posts and retweets in multiple languages.

(Translation: Justin has two songs in the Top 2 of the Billboard Hot 100 chart  this week)

Well, obviously you’d expect Justin’s dad to be somewhere high up on the Belieber list.

He’s got a huge following and likes to namedrop his celebrity friends.

Yo @LeoDiCaprio good seeing ya Newyears gotta do it again next year. #stbarths#cheers#prince

Justin’s guitarist Dan, who has more than a million followers, is our number three.

Regularly tweeting about rehearsals and a major proponent of the #PurposeWorldTour hashtag, the famed guitarist regularly pulls in thousands of likes and retweets from fans worldwide.

As the only account in the top 10 to use the name “Justin Bieber”, it’s possible that a chunk of @JBieberBoy94’s 718k followers have mistaken the account for the man himself but the account clearly states that it is not affiliated with the popstar.

Despite retweeting a lot of non-Bieber related content, allegiance to Bieber is clear.

So proud of you @justinbieber on this new album. It’s truly a masterpiece and you deserve so much recognition. #PURPOSE

It turns out our sickeningly sweet number one is actually, you guessed it, Justin Bieber’s mom.

She’s not like a regular mom, she’s a cool mom who is surprisingly adept at social media.

While many young people would cringe at their parents’ presence on social it seems Justin has had to deal with both his mother and father making a name for themselves on Twitter. Bless him.

Stand up for what you believe in, even if you’re the only one standing @justinbieber#lovewins

Are you a Belieber? Let us know what you think of our top 10.