Why Owned vs Earned is More Important Than Ever

‘Owned vs. earned’ is a phrase that, if you’ve ever spent any time reading about the world of marketing, PR or social media, you’ve probably heard plenty of times.

It’s not a new concept, but in recent years it has increasingly been applied to digital media strategies.

In simple terms, it’s the relationship (the ‘vs’ is somewhat misleading) between owned media – that’s your own Facebook page, Twitter channel, website etc – and your ‘earned’ media – mentions of you online, on other sites, by other tweeters and fans etc. Sometimes, paid media (online adverts, promoted posts etc) is also thrown into the mix.

Owned vs earned isn’t just an online concept – these types of media of course exist in the offline world too, but we’re all about the ‘world wide web’ here.

It’s not quite as simple as sectioning earned and owned media into neat groups though; the boundaries can be fuzzy.

For example, promoted and shared media sometimes crosses over into multiple types – earned, owned and paid – and something like an advertorial is paid content, but also ‘owned’ as the brand controls the content.

Research group Altimeter published a much-cited report that included this useful graphic that shows the overlaps, with paid owned and earned coming together to form ‘converged’ media. 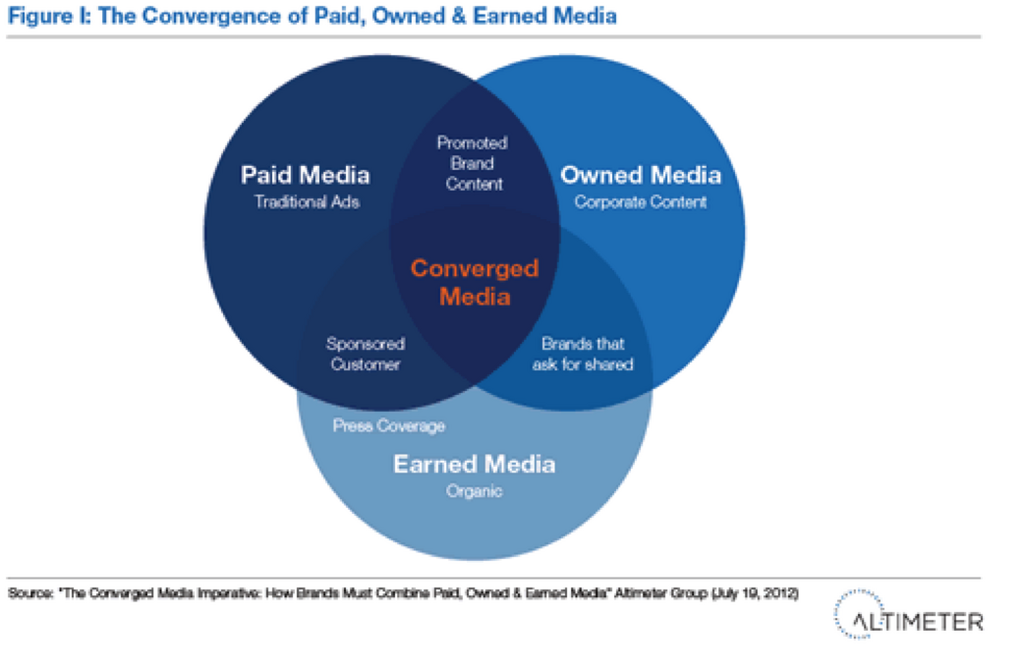 But difficult doesn’t mean impossible, and as Paul Danay wisely says in this post, teams can now use the ‘world’s largest focus group’ (social media) to model the audience and predict the effectiveness of owned and paid media efforts.

This is why it’s important to understand the differences in, and relationships between, your owned and earned media. Your earned media – conversations about your brand, and responses to your owned and paid media (both direct and indirect) can reveal many useful insights about the effectiveness of your strategy, and into the interests and preferences of your target audience.

Converged media has multiple benefits, with Altimeter claiming that brands that don’t take advantage of earned, owned and paid media are at a distinct disadvantage. Michael Brito, Senior Vice President of Social Business Strategy at Edelman, makes a great case for the benefits of converged media in this guest post on the HootSuite blog.

We’ve seen many brands embracing earned and owned media in recent times. Traditionally, Brandwatch has focused on earned media tracking – finding conversations about brands across the internet – but we found an increasing desire from clients to also track their owned media channels – their own Facebook page, or Twitter account, for example – so we recently introduced this capability with our Channels feature.

This helps brand more easily understand the impact of their owned media on their earned and to understand how content spreads across the web. Tracking your owned and earned media in one platform means you better understand your audience and what resonates with them, and can be vital in staying on top of potential PR crises and customer service issues.

The phrase ‘Owned vs earned’ may be considered a bit passé by some, but at a time when brands have multiple owned media accounts, and conversation about brands online continues to grow, it’s more important than ever before to track and measure both.