Just in case you were happy with your shiny new HD TV, the TV manufacturers have decided that you shouldn’t be and this year are promoting the next big thing: Ultra High Definition TV, known as ‘4K’.

Do we really need another update in TV tech? What’s the point in this upgrade? Well, erm, some people think there isn’t a point.

The problem comes down to a concept called visual acuity. Visual acuity measures how much detail your eyes can resolve at a particular viewing distance. If someone has 20/20 vision (“normal” vision), it means that at 20ft from a given subject they can resolve lines that are 1 arc minute apart, equivalent to about 1.75mm. 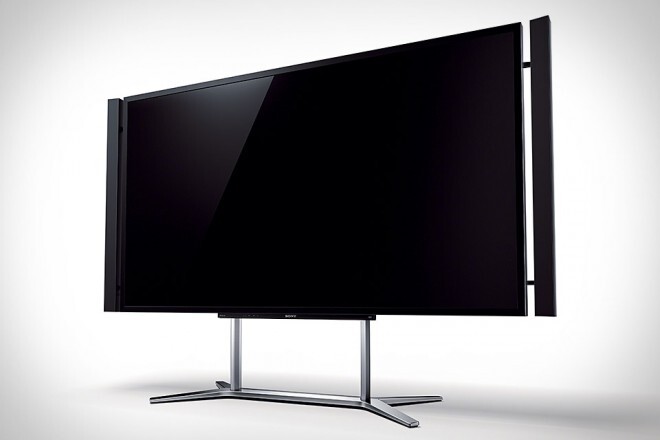 In the context of TVs, 20 feet is quite a large viewing distance (at least in my front room) and in the context of pixels 1.75mm is also rather large. The pixels on a 32 inch TV, for example, are around 0.37mm apart. The upshot of this is that to start to notice the increase resolution of a 1080p TV over a 720p TV, you need to be sitting no further than 8 feet away.

To notice the improvement in resolution of a 4K TV over a 1080p panel (even though it’s ten times the resolution, technically), you would need to be sitting either very close indeed, or have a rather large TV. This article from Carlton Bale seems to indicate that if you had a gargantuan 84 inch display you would only see the full benefit of 4K if you were sitting 5.5 feet away.

Who is talking about it?

So, we took to Social Media to find out if any consumers were jumping on the 4K bandwagon. 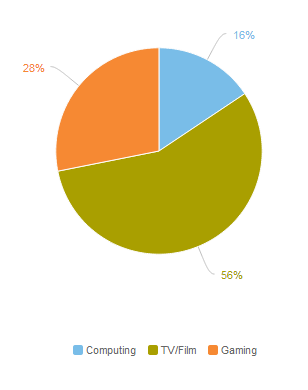 In order to analyse only the consumer conversation, we restricted our analysis to forums and manually reviewed and categorised a sample of mentions from the last few months.

Broadly speaking, the consumer discussion around the new format fell into one of 3 categories: film/TV, computing and gaming.

Film & TV was the most common topic, making up over half of all the mentions we looked at. Next was gaming, with 28% and computing made up of just 16% of conversation.

If 4K TV is going to go mainstream, it would appear that film buffs and gamers have the biggest appetite for the new technology.

Or do they? While the volume of conversation was centred around Film & TV, the sentiment around the topic was quite mixed. All 3 categories had a significant negative component to the conversation, with TV & Film having negative sentiment in over 50% of posts on the topic.

Conversely, positive conversation was scarce, being found in only around 15% of the mentions we analysed across all 3 topics.

When reviewing mentions we saw three main reasons for the apparent negativity.

Price:
With the price of 4K displays launched at CES ranging from $20,000 to $25,000, these products are well out of most consumer’s budgets.

Content:
The lack of source material was a concern for some. If you can afford it, then perhaps investing in a 4K display is an option, but if there’s no native 4K material available that investment seems to be a bit premature.

With a typical 4K film topping 225GB, storage and distribution of 4K video is a challenge the manufacturers and film companies are yet to overcome. Sony’s awkward home server solution is unlikely to become mainstream anytime soon.

Size:
Size is a big factor in the negative discussion around 4K TV. As discussed above, 4K only really makes sense above a certain screen size and most people don’t want or need a TV of those proportions. 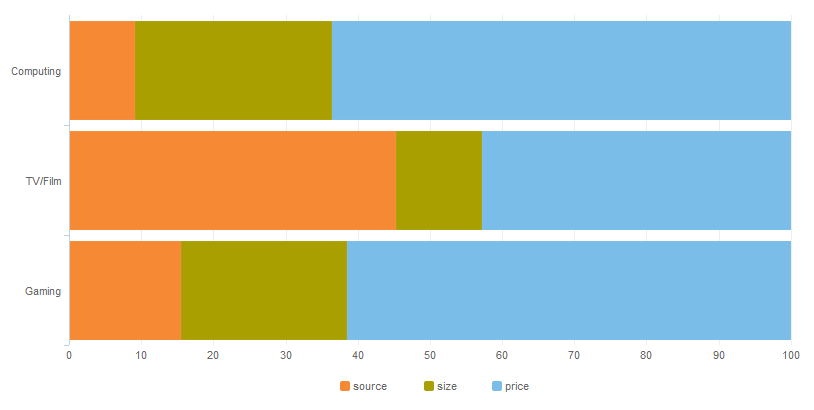 From the above chart, we can see that within Computing and Gaming conversation, the most frequently discussed of these three concerns is price, with source material being of less importance. This may be because computers are set up for 4K content already and 4K consoles are on the way (Nvidia’s upcoming handheld Project Shield is capable of 4K output).

Concerns around source content within TV and film conversation is more significant, however, making up nearly half of all the negative posts found.

This analysis of online conversation of 4K discussion indicates the following: