React: Spotify Wounds Apple Music After Free Trial, But The War’s Not Over

If you’ve got an iPhone – or bought one in the last month – you’ve probably tried out Apple Music.

Tightly tied into the new iOS, Apple’s challenge to Spotify, Pandora, Rdio and the entire music industry was hard to ignore.

At $9.99 per month or $14.99 for a family subscription, it’s not an insignificant purchase – especially considering the device and data plans you need to use the service.

Apple let people try out Apple Music for three months before asking them to cough up any money. As the service launched on June 30, the last day to cancel a subscription without incurring a payment was September 29.

A hefty chunk of people were only in for the free stuff – though they were also the people who plain forgot to cancel.

Others faced a serious choice.

Most people can only subscribe to one music streaming service, unless you’re a mad billionaire audiophile.

All of the services currently available have a similar offering, but have key features added or omitted.

Spotify, run out Stockholm and London, mixes a blend of human and algorithmic curation to delight users with music they know you’ll like. Their recently launched Running app brings podcasts and beat-matching into the suite of audio gems.

Apple Music is a different proposition. It’s a much bigger, wealthier enterprise. While the predictive technology and UX is arguably worse than Spotify, Apple Music has a 24-hour manned radio station. Plus, they’ve got Taylor Swift.

Our recent research shows that music fans are torn between the two.

When Apple Music launched, thousands of people left Spotify. Three months have passed, and the same amount of people are leaving Apple Music.

There’s no way to declare a winner – yet.

[Editor’s note: please listen to this song to underscore your reading.]

Back in June, we analyzed the launch of Apple Music. In the weeks immediately after it went live, it seemed that Apple had emerged victorious.

As shown in the below image, people claiming they ‘loved’ Apple music almost outnumbered Spotify ten to one. Similarly, there’s a sudden spike in people mentioning that they are ditching the service.

In the months after, things were much closer. 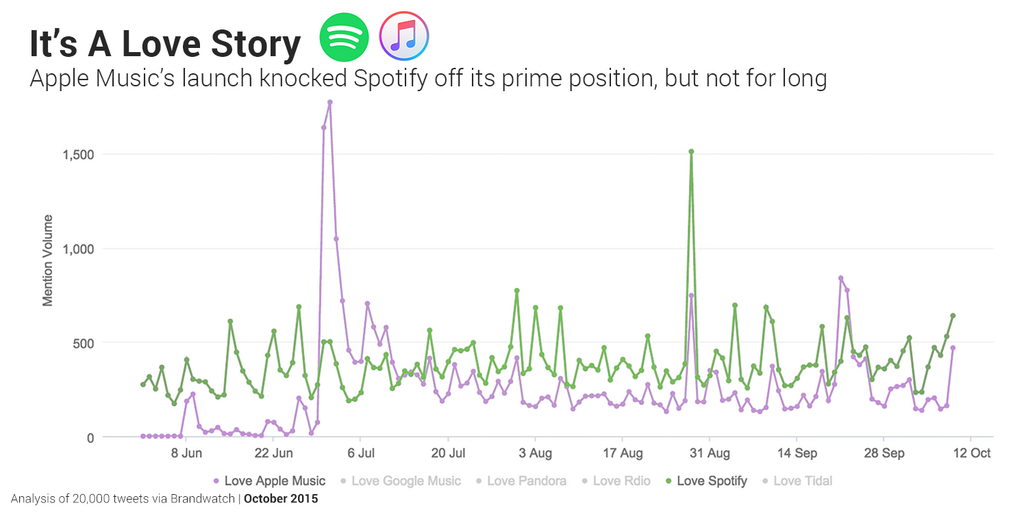 The Apple buzz died off after two weeks. On July 16, the number of people online stating they ‘love’ Spotify overtook Apple Music again for another two months.

We’re excluding retweets here, and only focusing on a very perscriptive “I love ____” format – hence the numbers may be lower than you’d expect.

There were two spikes during this period.

Firstly, 5 Seconds of Summer – the ‘One Direction of Australia’ which this writer only discovered while researching this article – announced their album was hitting Spotify. With over 7 million followers, this made an impact on the general conversation.

A spike for Apple Music love was caused by One Direction (and the UK’s Little Mix) performing at the month-long Apple Music Festival on September 22.

We’ve talked about the One Direction effect before and it’s very real. It’s just not particularly useful when judging a superior music streaming service.

I was begging you, please don’t go

Writing ‘unsubscribed’ in the comments section of a website is one of the easiest and most common ways to express your dissatisfaction with a service you’re using.

It’s just 12 characters that say “I’m unhappy with your service, you’ve lost a customer, and I’m going someplace else.” 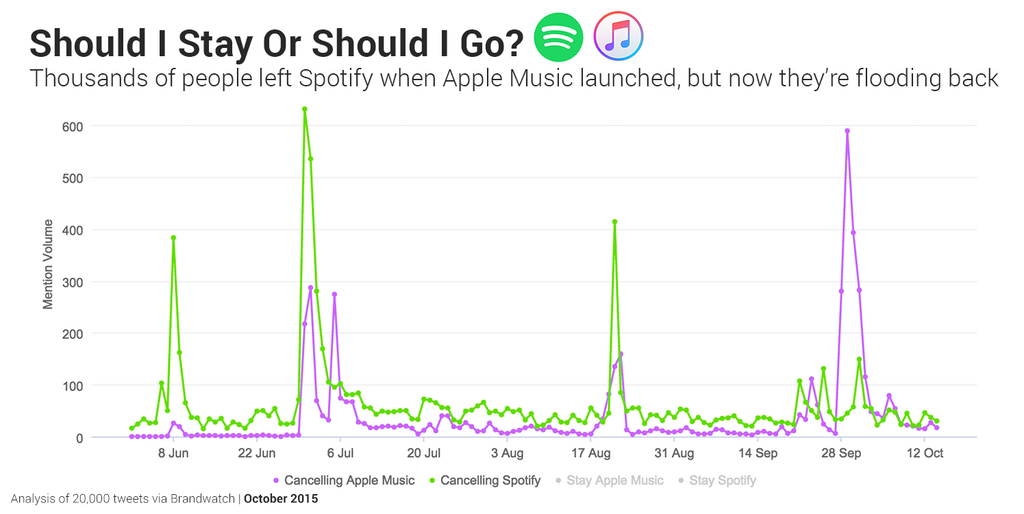 Quite a few people actually announced they were leaving Apple Music before the trial ended.

A large amount of them were writing a ‘note to self’ for the future, but a similarly large amount were saying they don’t like Apple’s playlists – they prefer Spotify’s works-like-magic system.

Spotify, on average, saw about three or four times the amount of ‘cord cutting’ mentions than Apple Music on a daily basis.

Many were specifically citing the lack of Taylor Swift as the reason behind their discontent.

The service saw a large (claimed) outflow of users in reaction to their new privacy policy, which stores information from your devices, camera, GPS, contacts and more.

I’ll be waiting, all that’s left to do is run

Finally, a note about loyalists and fanboys. This is Spotify’s strong point.

Despite conclusively having more subscribers than Apple Music, they’re still perceived as the small guys. It’s why subscribers shower them with so much love on Twitter – and throw so much shade at Apple Music. 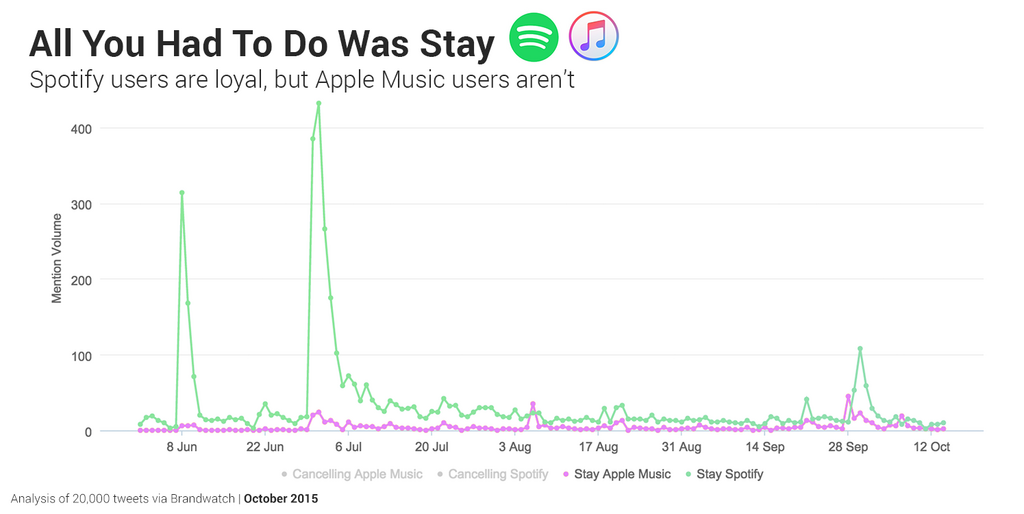 In fact, we found more conversation about people forgetting to cancel Apple Music, being obliged to continue using it.

We hope Spotify is listening to the criticism of Apple Music, but, judging by their Twitter feed, it’s clear they’re not. At least, they’re not letting users – or the public – know.

We’ve had several people exclaim to us about how brilliant their ‘Discover Weekly’ playlist is. And, the UX is undeniably elegant.

Apple Music, by comparison, feels like it’s reaching back to a time where the the majority chunk of the music discourse was set by big labels, radio stations, and a handful of artists.

They might pull it off, but it’s too early to tell. Don’t touch that dial.