What Social Media Revealed About the Eurovision Song Contest

Last weekend, thousands of dressed up, euro-pop crazy people descended on Malmo, Sweden, to soak up the atmosphere and see this year’s Eurovision song contest.

Here at Brandwatch, we saw this as a fantastic opportunity to flex our data muscles and get analysing. We collected all tweets about the contest on the night of the final and have displayed that data in an interesting, visual way that also tells us a bit more about the Eurovision buzz.

As the data streamed in, we used Brandwatch’s Rules feature to categorise tweets according to the topic of conversation related to elements of the performance: song, voice, sex factor, outfit, appearance, dance routine, performance, political and stagecraft. 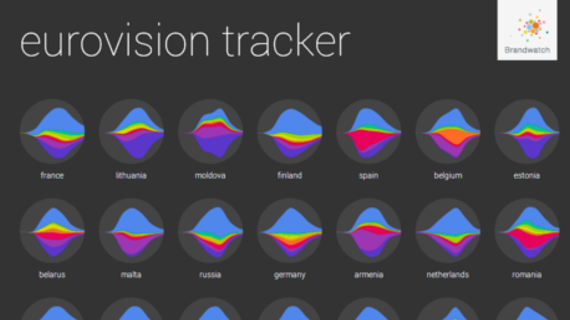 We also categorised them according to emotion, to further understand how people felt about each country’s entry.

On the night, during the show we collected nearly 1.8 million tweets – that’s a whole lot of Eurovision love (and some hate!) We’ve put together a dataviz that shows all the data by country and there are some interesting insights into how their performances were received.

Take a look at the viz here and have a play with the data – there’s some interesting insights to be found. For example, Belgium’s interesting ‘many arms’ dance routine provoked a lot of chat, whilst Spain’s use of lots of fog, lanterns and wind clearly made an impact on the audience.

There’s plenty more to see – take a look – but we’ve also pulled all of the data from the night together to provide some further insights. 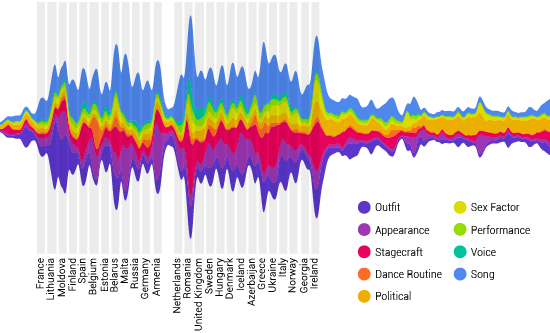 When we look at all the data together and compare countries, we can see that Romania’s slightly odd Dracula-esque performance got the most buzz, followed by Ireland. Surprisingly, winners Denmark didn’t experience a significantly higher amount of buzz than other countries. We can see,however, that during the voting portion of the night, the discussion of political topics increases – no doubt the yearly complaints that voting has little to do with the actual songs. 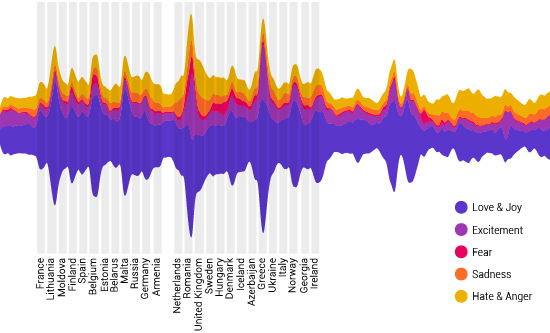 When we look at the data divided by emotion, we can see that there was quite a lot of love and joy throughout the night, which is nice; Eurovision always provides lots of fun.

As one Brandwatch fan, who attended the final, said: “The atmosphere both in and around the arena was electric, with thousands of fans milling around in all manner of outfits. Everyone was talking and taking photographs with fans from other countries and the overwhelming feeling was one of friendliness and goodwill.”

However, hate and anger increases during the end of the show – the voting section – which is no doubt viewers disagreeing with the voting choices of other countries.

Romania and Greece experienced the most emotional chatter, with Romania provoking quite a lot of fear and hatred, and Greece provoking more love, joy and excitement.

What amazed us this year was the sheer number of tweets about the Eurovision. At Brandwatch, we always strive to do something innovative and our matra is ‘Be bold, be brilliant’. This was the first time we’d tried to do a live dataviz, and we learnt a lot in the process.

We had tested our viz with last year’s data, and although we expected a rise in the volume of data, 1.7 million was more than we had anticipated. This led to the technical difficulties we experienced on the night, which meant that we couldn’t let users play with the dataviz live during the contest as we had hoped. We apologise to any fans who were disappointed, but hope that you enjoy playing with the viz now and looking back at the data.