In Emma Watson’s HeForShe address to the UN back in 2014, she called for a drive towards gender equality reliant on both men and women.

“We don’t often talk about men being imprisoned by gender stereotypes”, she explained, “but I can see that they are and that when they are free, things will change for women as a natural consequence”.

In our most recent study, the Brandwatch Research team critically assess issues of prejudice towards both men and women and changing attitudes to gender norms.

We teamed up with anti-bulling charity Ditch The Label to shed light on attitudes towards gender in online discourse.

Our study makes use of almost 19 million tweets in the UK and US over the past four years. We used this to define masculine stereotypes, locate their strongholds and see what happens when individuals deviate. We also measured misogynistic language use and point to implications of gender stereotypes for both men and women. 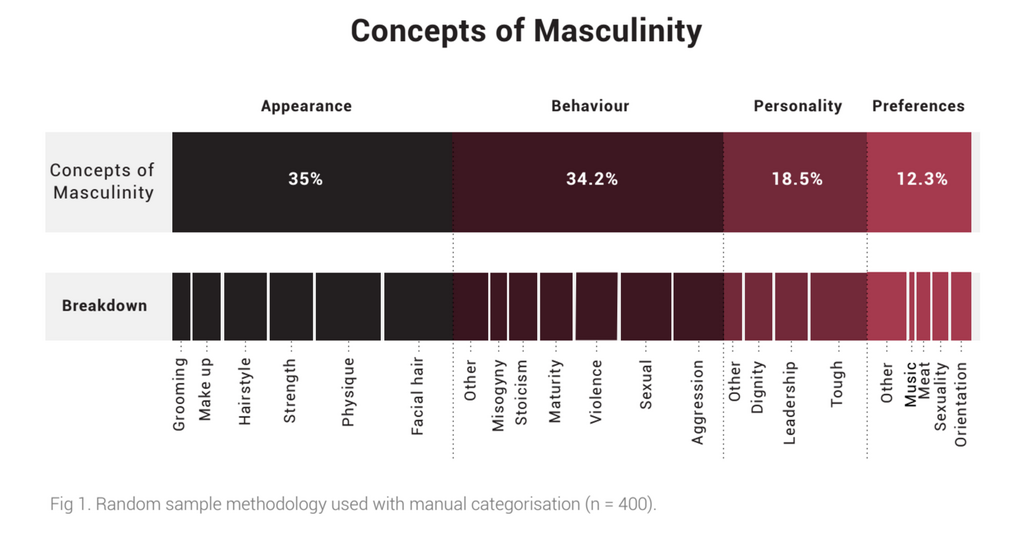 In our data, we found some common agreement on what constitutes masculinity.

The construct can be broken down into four facets: preferences, personality, behavior and appearance. Men seen as masculine are more likely to be bearded and muscular. 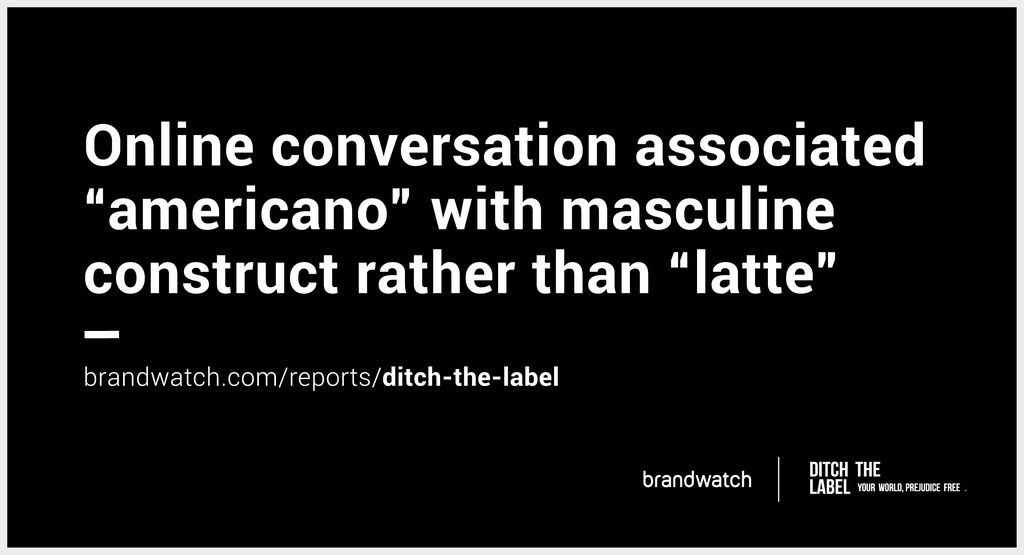 It turns out these stereotypes have more serious effects than averting frappuccinos. Masculine norms can worsen symptoms and hinder treatment in men with depression.

They also make men less likely to seek treatment for physical injuries, pose barriers to education and, when restricting male expression, are linked to violent crime. 91% of US inmates are male (over 95% in the UK) so it’s surprising that until recently many studies have overlooked issues of gender. Times, though, are changing.

It might be tempting to view masculinity as built-in and ascribe it to higher levels of testosterone.

However, research shows that environment has a large part to play in how hormone levels manifest. In other words, gender is heavily influenced by society. For brands, this is both an opportunity to enact positive change and an obligation to represent gender responsibly. This is a welcome change for those struggling with the masculinity construct.

One promising finding was found in how authors respond to deviation: 67% of responses were positive or supportive in tone.

Key to issues of masculinity are concepts of femininity and womanhood. We found direct reference to this in the masculine construct (the saddening claim, for example, that assertiveness in males is viewed as leadership potential but in females as bossiness).

We also tracked misogynistic language separately to assess where this conversation is taking place.

In the chart below, misogynistic language is segmented into semantic categories. Many pejorative terms have expanded beyond their original meanings, but etymologies do give a useful framework for understanding implicit attitudes.

Overall, animal-derived terms and those relating to sexual promiscuity were the most common (84% combined). 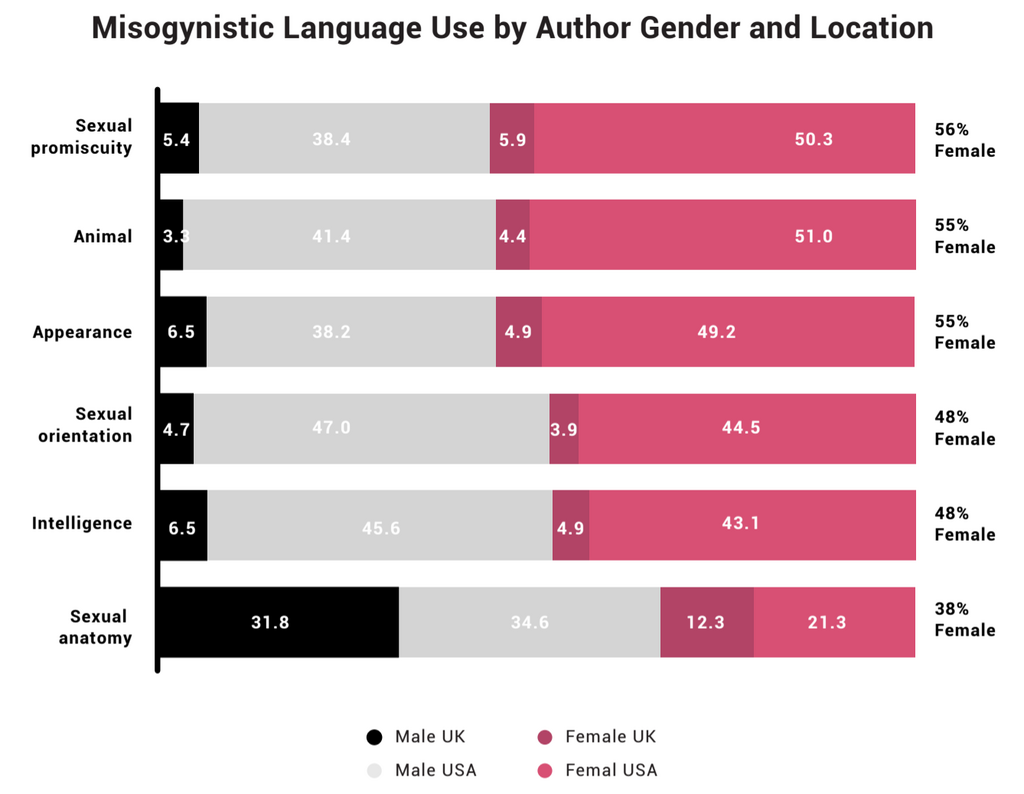 Interestingly more than half of all misogynistic language came from female authors, validating a smaller think tank study earlier in 2016. It also suggests that efforts to tackle gender inequality, including implicit misogyny, should address both male and female audiences.

While some traditionally misogynistic terms have been appropriated in female-to-female exchanges, the vast majority in our data set was still used intentionally to cause offence.

Authors associated with family and parenting were overrepresented in hate speech across all topics, especially for the masculinity construct and misogyny. Paired with research showing the effect of home-based gender norms on children, this suggests the risk of attitudes being transferred to future generations within family settings.

By contrast, teachers and lecturers were more likely to encourage debate surrounding gender issues, highlighting one means by which gender constructs may be challenged at an early age.

This project sheds light on issues relating to hate speech, but should not be viewed as an argument for online censorship.

Rather, the data points to the need for a nuanced approach with further open debate and awareness. It also encourages each of us to be more cognizant of the language we use and the unintended connotations our words may be harboring.

Segmenting between male and female groups is useful within the data we have available, however in reality there are many individuals who do not fit within this binary model.

There are also limitations to assessing conversation within one social network, however, our findings support and supplement a growing body of gender research. It also highlights Brandwatch data as a powerful tool for measuring current public attitudes and facilitating positive social change.

Masculinity and Misogyny in the Digital Age

What can social data tell us about what it means to be a man and the use of misogynistic language?. 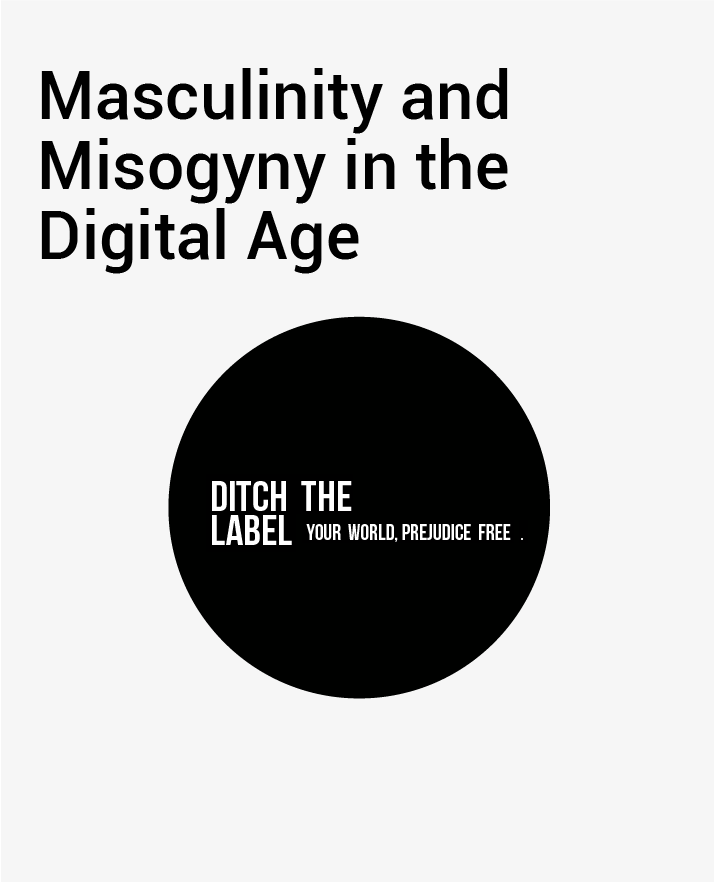