#ItsComingHome: The Rise and Fall of a Nation’s Meme

On an island in Western Europe, a grey and wet country was suddenly bathed in unending sunshine while their football team battled their way through the World Cup. A population in unison called out: It's coming home.

A weird type of collective mania gripped England this summer, not dissimilar to the deadly dancing plague of 1518.

You could see and hear it everywhere.

What the hell was going on?

An American has questions.

The hell that was going on

It all came about during this year’s World Cup, an international football (soccer) tournament that pits country against country.

For many people across the world it is the biggest sporting event in existence, and a source of deep and sincere national pride.

And this is 100% true for many people in England. Football is the sport here. We invented association football back in the 19th century and people take the game very seriously.

In other words, football’s home is England. And to England fans in 2018, winning the World Cup means bringing it home.

So not only does England have football built into its psyche, it’s also suffering from some kind of detachment condition as the country has only won the World Cup once. In 1966.

So why does “It’s coming home” refer to winning a World Cup?

To understand that, we need some historical context.

On the 20th May, 1996, two comedians and a britpop band released the single “Three Lions”. That year England hosted the Euros, the second most important tournament for European football fans. Not as big a deal as the World Cup, but still hugely important.

A big hit, its chorus featured the phrase “It’s coming home.” It put forward the idea that with England hosting the Euros, football was returning home to where it was invented.

But a new association soon spawned alongside that. Instead, people interpreted “It’s coming home” as England winning the tournament, placing them as the best team in Europe and that also meaning football had come home.

Following that, if winning the Euros meant football coming home, then winning the World Cup meant it too and, for the ’98 World Cup, a new version of “Three Lions” was duly released.

Meanwhile it had become a staple England football chant.

The ’96 version already heavily referenced previous World Cups and England’s defeats at them, but with a second release, “It’s coming home” and its secondary interpretation was cemented.

The tournament did not have to take place in England. The England team simply needed to win the Euros or a World Cup, preferably the latter, and that would bring football home on a plane.

But this still doesn’t explain why “It’s coming home” memes (from now on referred to as ICH memes) exploded during the 2018 World Cup.

England have taken part in seven Euros or World Cups since the invention of Facebook, yet we never saw anything like we did this year.

What it comes down to is a number of factors all occurring at once:

So a mixture of history, weather, technology, and personality came together all at once to get the whole thing going.

Using Brandwatch Analytics, we tracked mentions around “It’s coming home” and the hashtag #ItsComingHome just as the meme started to take off at the beginning of the competition.

At first it was a matter of self-deprecation—no one really believed England could win—but before long the conversations became tinged with something England fans rarely feel: genuine hope.

It’s hard to pinpoint when it shifted from a common football phrase into a meme, but here are a few of the earlier tweets where we can see things start to change.

By the time England had won their opening game against Tunisia, “It’s coming home” was the de rigeur online football ‘chant’.

The memes had begun.

Before long, you couldn’t move on Twitter and Facebook for ICH memes. The #ItsComingHome hashtag was becoming increasingly popular, and everyone was getting a bit excited.

This continued throughout the competition, growing and growing as fans went from slightly taking the mick out of themselves to really believing it might just happen. 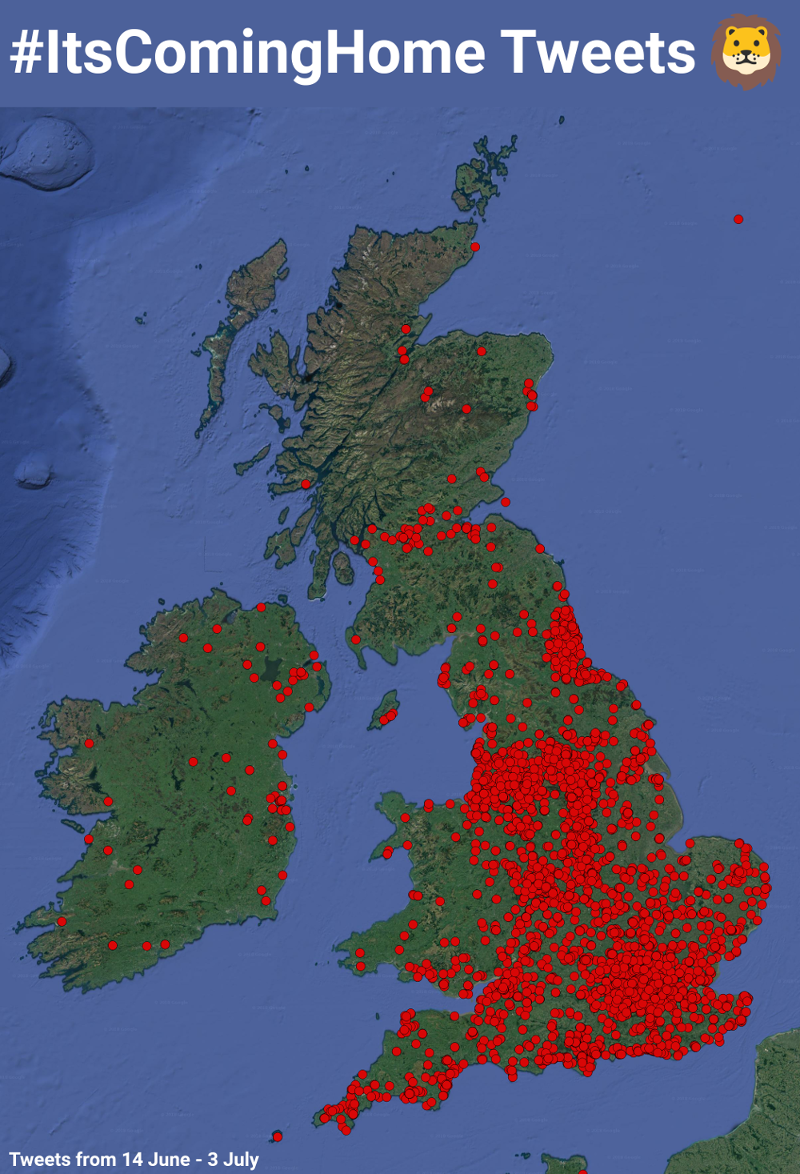 Specific meme formats appeared. Some just a dogged commitment to and repetition of the phrase, others creating fictional scenarios containing the immortal words. Of course there were the brands getting involved too.

But there was one format that really stood out.

An example of how odd the whole thing of chopping, changing, and remixing memes can be involved myself.

I made my own. Taking the sound from a piano cover of “Three Lions” I put it over the music in the famous Casablanca scene where Rick Blaine demands that Sam play “As Time Goes By”.

Hilarious, I thought, and my tweet did relatively well. And then, lo and behold, I come across a tweet with the same idea. I’d been ripped off! But then, more lo and behold, that tweet didn’t rip off my version, but a different version made a day before mine.

With talk of serious work to stop meme creators breaking copyright laws, my full sympathies to the lawyers who will have to drudge through the quagmires of the internet working out who made what meme and when.

Back to the World Cup and tension was building.

To top off this maelstrom of hope and unlikelihood, England had won their first ever penalty shootout at a World Cup. Penalties have haunted the dreams and subconscious of England fans for decades and then, amongst the hot weather and cold beer, we went and won some penalties.

And with that we were in the quarter-finals.

Lads. Lads. Laaaaads. It was coming home. It was so close it was!

Then along came Croatia.

And that’s it. It was all over (except the 3rd place playoff, which we dutifully lost as well).

The collective fever dream was dead. Football to be estranged from a comfy sofa and a nice cup of tea for at least another two years.

And with that, the ICH memes slunk off as well. You can see how it built over time. Barely a peep as the World Cup began, but with every victory (and rival’s defeat) confidence grew.

In all likelihood, had England made it to the final, that peak on 11 July would have been utterly dwarfed by the build up and eventual game. Had England won the whole thing that graph would need to be about 100x taller.

Eventually we all had to accept that it wasn’t coming home. And, in fact, we managed to find out the exact time English dreams of glory crashed sharply into the ground: 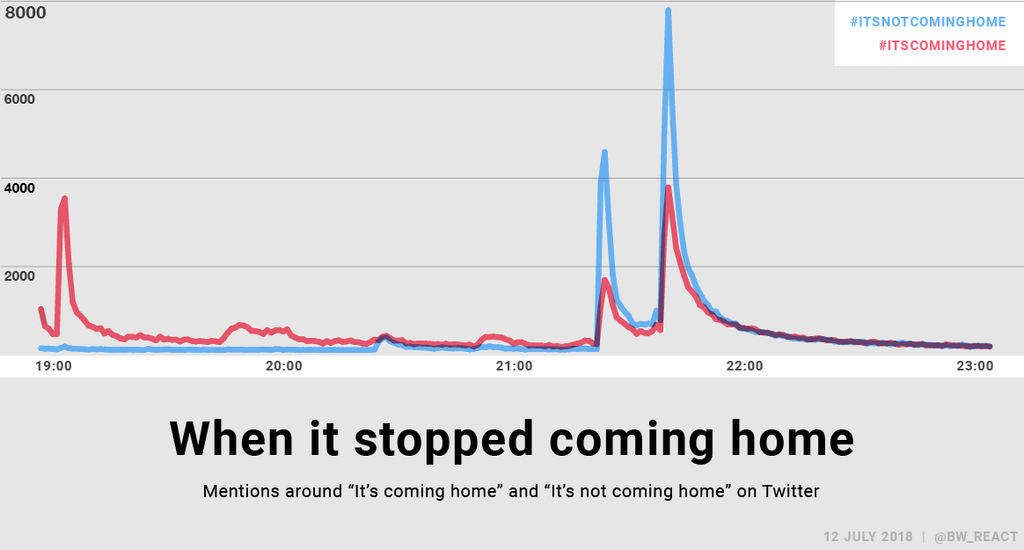 At that moment Croatia’s Mandžukić’s goal put his team 2 – 1  ahead and destroyed England’s last hope.

And that was that.

At least not this year anyway.