Is Avril Lavigne Dead? A Social Data Investigation Into The Popular Theory

Have you ever typed into Google "is Avril Lavigne dead?" You wouldn't be the only one. As the theory goes viral again, we're on it with the data.

Why does the internet have to go and make things complicated? Today, once again, the theory surrounding the death of Avril Lavigne, and replacement by a lady named Melissa, has resurfaced.

And, once again, we fell down the rabbit hole.

Why is it back?

Basically, this Twitter thread went viral. If you’re not aware of the general theory, go ahead. See you in five minutes (or maybe five hours depending on how deep you go).

What can social data tell us about the “Is Avril Lavigne dead?” conspiracy theory?

The theory has been around for a long time.

We used Unlimited Historical Data to search for mentions of Avril Lavigne near “clone” or “replaced” or “lookalike” (and other terms/misspellings) for the past three years. As you can see, there’ve been bumps in interest in the story for a while (although, admittedly, they’re kind of drowned out by the current huge spike. 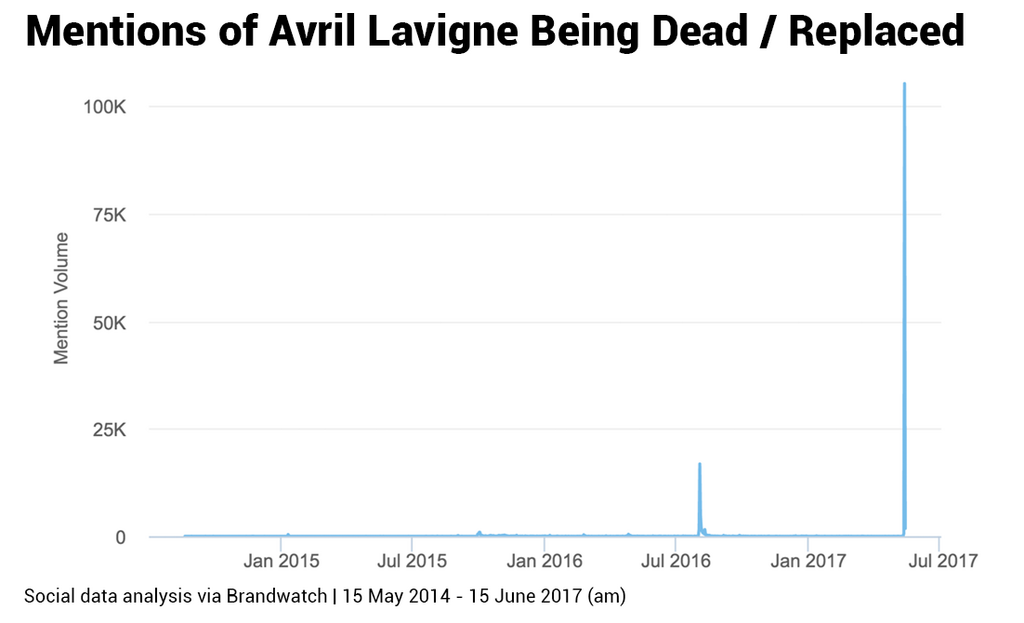 Going back further with Google Trends, you can see how the question “is Avril Lavigne dead” has grown in search popularity. Presumably, the trend grew as the pile of totally legit evidence towered higher.

One of the most famous artifacts in the Avril Lavigne conspiracy theory story is the Brazilian blog “Avril esta morta“, dated in May 2011. It’s been six years and this theory still hasn’t been put to bed.

Everyone loves a conspiracy theory and, it appears, is willing to spend chunks of their working day examining the sometimes dubiously curated evidence for a compelling and dramatic (yet often fairly trivial) narrative.

There’s never been a shortage of suspense-loaded dramas in the public consciousness, real or unreal. However, with Netflix and other networks continuing to invest in drawn out true-crime stories like Making a Murderer, it seems there’s a real hunger for stories with macabre themes right now. That might be why the story of Avril Lavigne’s alleged demise has resurfaced again so enormously.

2. There are multiple theories, and the details are very inconsistent.

But the overwhelming theme is that she is dead and that a body-double named Melissa Vandella took her place.

You only need to have a quick scroll through Twitter to find the “evidence” and resulting sarcasm.

Female authors are around doubly as likely as male authors to talk about the conspiracy theory online. 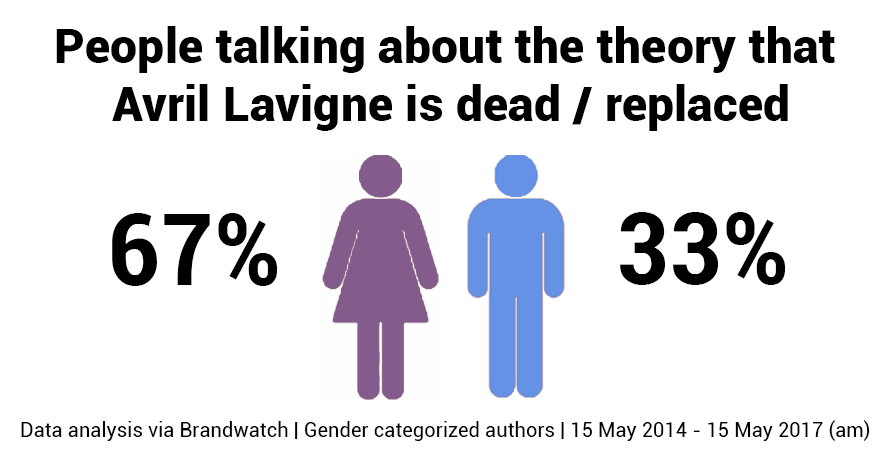 We also thought we’d take a look at what the real fans were saying using Brandwatch Audiences. Trending amongst the tweets of people who use the words “Avril Lavigne” in their Twitter bios (of which there were over 9,000) were pictures of old vs new Avril as well as a picture circling Avril’s nose (a common part of the theory is that her nose shape has changed).

When will it end?

We may not be able to reveal whether the conspiracy theory is true using social data alone, but we know when it will be solved.