React: Our Search For the Next Hollywood Blockbuster

One of my favourite parts of researching Twitter data is discovering the snippets of individuality and humor, like finding a Banksy on a messy wall of graffiti.

Armed with a keyboard, everyone’s a comedian. But is there value beneath the superficial, and can we really find some glimmers of genius amongst the noise?

More importantly, can we find the next Steven Spielberg?

Searching for terms related to new movie ideas dating back to May we were able to find suggestions for the next big Hollywood blockbuster – from potential moneymakers to guaranteed box office flops.

Mentions for Disney film ideas pull ahead with mentions containing “Disney”, “Disney Pixar” and their handles.

On the flip-side, when thoughts are done with fantasy and magic, minds are turned to fright and gore. 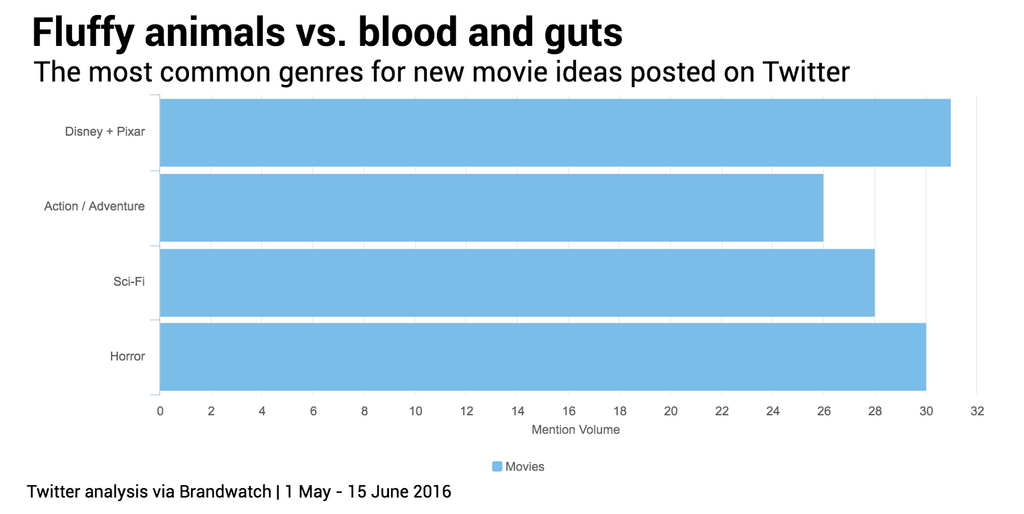 Perhaps due to the whimsical nature of Disney films, suggestions in this category stand head and shoulders above the rest for individuality and wit.

Film idea: Who Framed Roger Rabbit style. In the 20’s-40’s, Mickey as a Hollywood actor making it big at Disney.

.@DisneyPixar I have your next great movie idea. pic.twitter.com/QgY1lz9rTk

Brace yourself for the scariest ideas of all

With mentions for the horror genre coming in at second place, it seems the people of Twitter are more sinisterly creative than we may have once thought.

Mostly self-delusional screenwriters rush for the chance to pitch the latest scarefest ideas on social media.

New horror movie idea: “The selfie stick slayer”: watch your friends get the FaceTime they deserve. A GoPro classic

Movie idea
“The Contouring”
It’s a psychological thriller about makeup

As the plot thickens, it seems horror isn’t quite what it used to be.

Sci-fi ideas are a little better, but we’re still not sure this is going to win an Oscar.

As the niche skill of script writing can be assisted by research-sourced ideas, there is one thing guaranteed to emerge on Twitter: puns.

Perhaps the most…unique ideas from the last month and a half have been presented as punny film titles.

Film idea: ‘Prince of Persil’. An Arabian prince loses all of his money and servants. He must do his own household chores. Hilarity ensues.

FILM IDEA: Rom-com about an eskimo girl who struggles to find love overseas. “He’s Just Not That Inuit To You”.

Pixar movie plot idea.
The ocean pollution spins out of control and all fish lose the ability to see.
Blinding Nemo: Dark Side of the lagoon

Taking a trip through the Twittersphere is enlightening, inspiring and entertaining.

Social media allows those roaming thoughts founds in the backroom of brains to be catalogued, shared and discovered.

That is, if the ideas hang about long enough to Tweet.

You heard them, Scorsese.