#Hiddleswift. A sloppy collision of the names Swift and Hiddleston. It’s sweeping social.

The term refers to the news that Taylor Swift and Tom Hiddleston are dating – an event with such seismic consequences (and photo ops seemingly crafted by angels) that it’s being eaten up by the world media and social alike.

#Hiddleswift is like Donald Trump. Everyone thought it was a joke but now it’s taken over the Internet and will soon make our brains mush

But the whirlwind romance hasn’t been without controversy, and many have taken to social media to express their concerns about how legit the stars’ new found love really is.

In a desperate search for the truth, we took a look at the data behind the romance that’s taken the world by storm.

No blank spaces in this data

We looked at three weeks worth of mentions of #Hiddleswift (and other combinations of Taylor Swift and Tom Hiddleston).

Overall we found 280k mentions between 15 June and 6 July across social media. It’s a conversation predominantly driven by female authors (66%), with just 34% male.

According to this handy relationship timeline, our data collection begins just after the pair were first photographed on a nice beach date and the world went nuts. 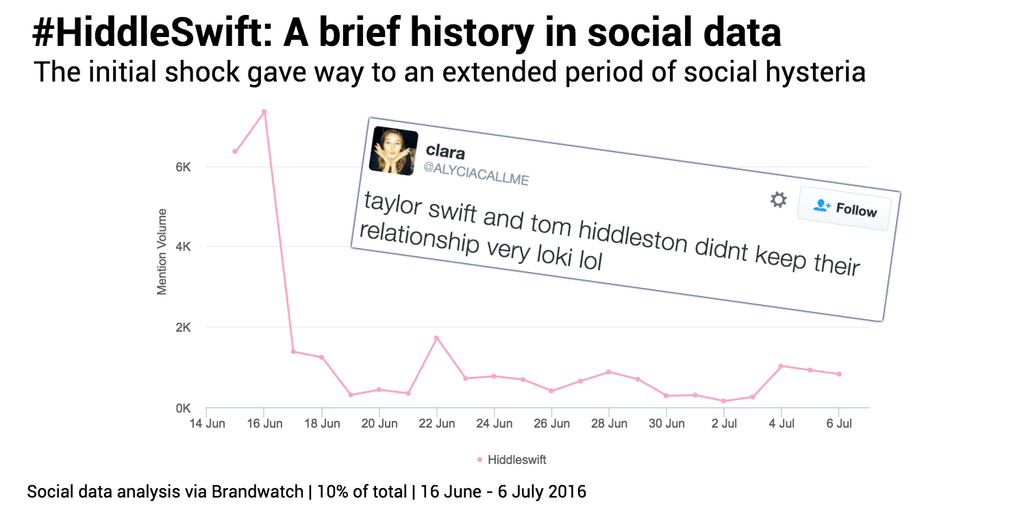 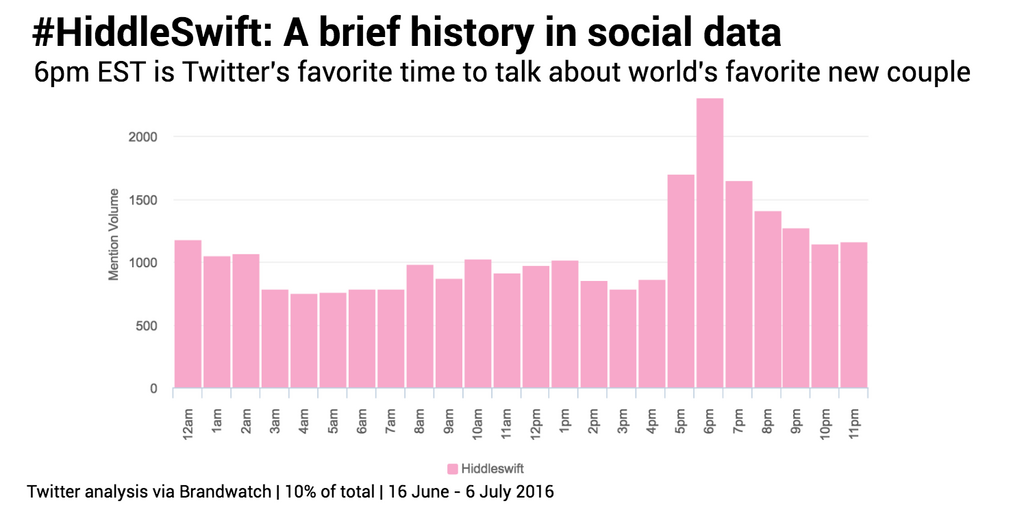 No shortage of conspiracy

The couple may have been getting through relationship milestones faster than tweeters can type, but there’s a whole lot of skepticism online about whether their relationship is actually real.

Here’s a visualization of the top terms used across social media for the last three weeks regarding the relationship. 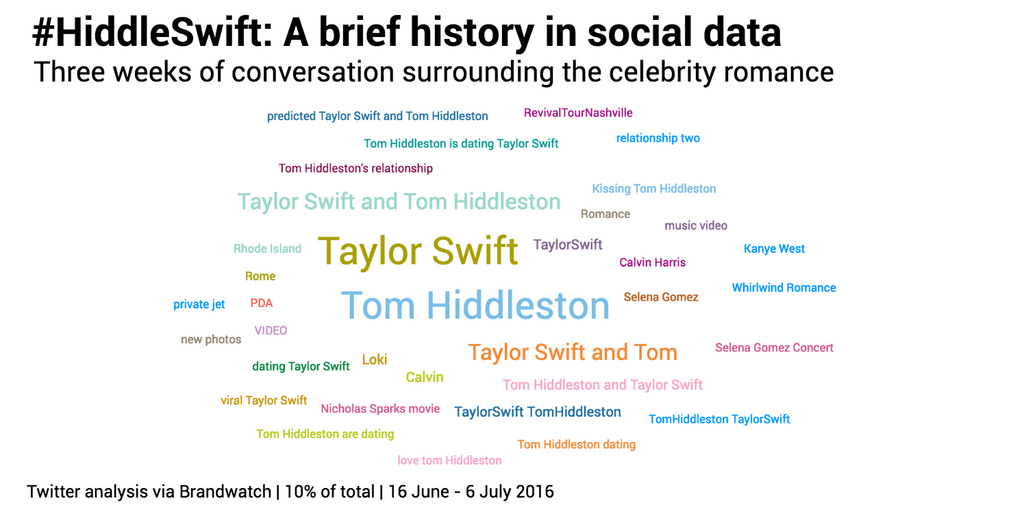 But it’s not all positive.

Calvin Harris (Swift’s ex) and Kanye West (who has had a publicly rocky relationship with the pop star) are featured, and “music video” sits just above them.

What does “music video” have to do with #Hiddleswift? Check out this conspiracy theory that’s the third top trending topic surrounding mentions of #Hiddleswift over the last three weeks.

So there’s a theory that Taylor Swift and Tom Hiddleston are ACTUALLY just shooting a music video ?https://t.co/5W82d13ogZ

I really think the Taylor Swift /Tom Hiddleston thing could be a music video.
In fact as a screw you to the media I hope it is.

If this is true, it’s a pretty successful prank.

Another weird prominent entry into the topic cloud is the fact that one “magical psychic” fan fiction writer even predicted the relationship and the details of how it started in an eerily accurate way two years ago.

Meanwhile, this tweeter thinks the relationship could have something to do with Tom Hiddleston’s next career move…

Despite the skeptics sharing all kinds of conspiracy theories, a lot of the buzz around #Hiddleswift is positive.

Looking at Twitter data, the top shared story is this one from the Daily Mail (though a lot of the mentions are collectively cringing over Hiddleston’s “I heart TS” shirt.

Whether this is an elaborately planned stunt or true love, the pair are doing a good job of shaking off the haters.