The Most Hotly Anticipated Superhero Movies 2018

The Brandwatch React team uses Twitter data to find the most hyped up superhero movies 2018. Find out which movie tops the list, and which are more popular in male and female audiences.

Which movie will top the list this year? Who’s talking about the biggest superhero movies of 2018?

Prepare yourself for data.

We’ve studied the conversation surrounding the following movies set to come out this year:

We removed mentions of “trailer” or “officialtrailer” or “in theaters” to try to remove some of the advantages a trailer coming out in the time we studied, but it should be noted that just because mentions don’t include the word “trailer” doesn’t mean there aren’t spikes when trailers are released. We also removed the terms “Justice League” or “justiceleague” so as not to give Aquaman an unfair advantage after appearing in the 2017 movie within the time period we studied.

We found more than 10 million tweets about the upcoming movies (without trailer and Justice League mentions) in total.

Which movies are men and women tweeting about?

If you think superhero movies are just for boys you’re very wrong.

We found that the breakdown of gender-categorized tweeters discussing superhero movies coming out in 2018 was incredibly balanced. 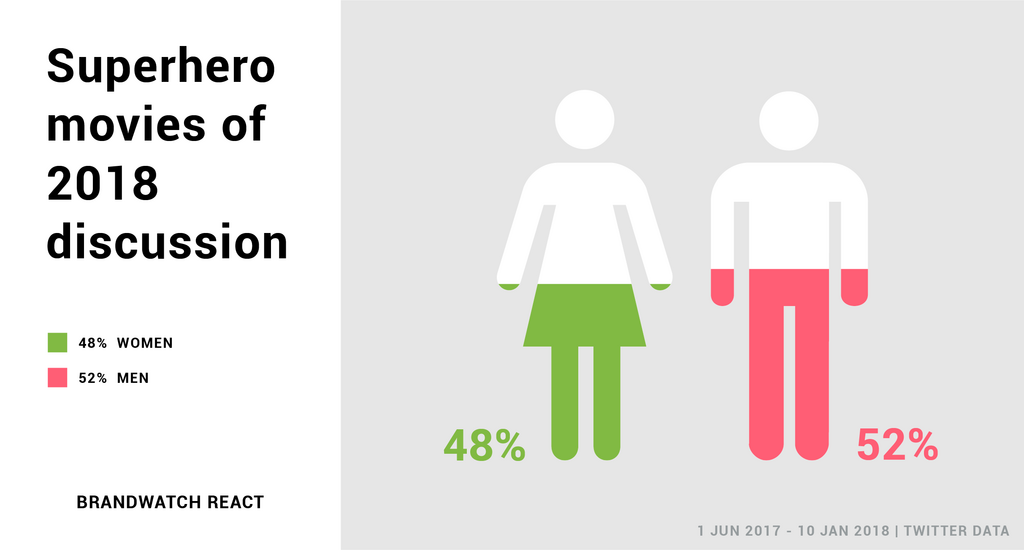 But what movies were these tweeters talking about?

Aquaman isn’t getting nearly the amount of love from the ladies as he is from the guys, while X-Men: Dark Phoenix could be more of a hit with women than men.

Avengers: Infinity War and New Mutants appear to be the most balanced.

The most hyped superhero movies 2018

So which movies triumphed when it came to hype on Twitter?

Here are the top five, including our winner – Black Panther ? 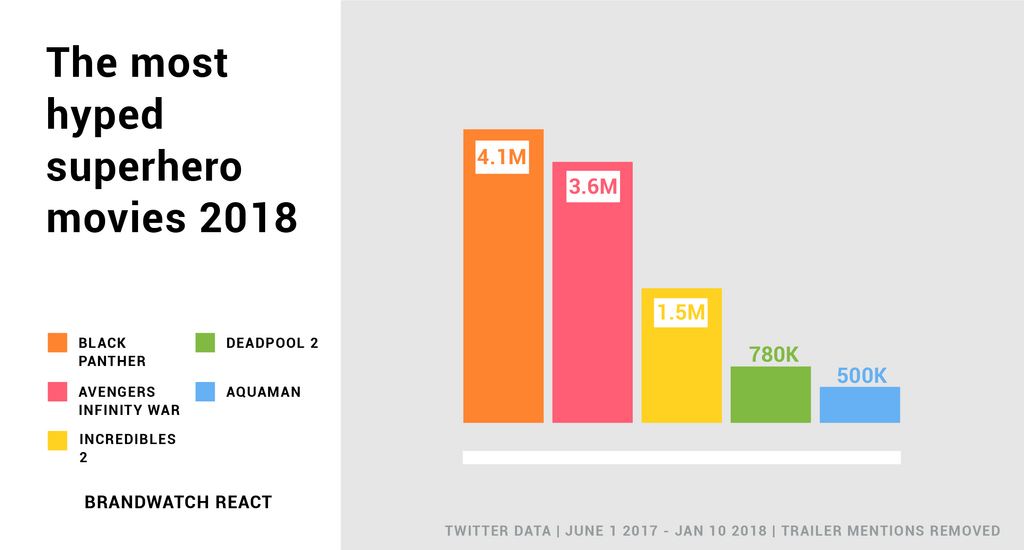 Black Panther will be in theaters this Feburary.

We weren’t particularly surprised to see Avengers: Infinity War in the top 3. The movie’s coming in May and it looks like it could tear up the box office.

Thank you to the best fans in the universe for making Marvel Studios' "Avengers: #InfinityWar" the most viewed trailer of all time with 230 million views in 24 hours! ? pic.twitter.com/bWa3HZir2g

We certainly weren’t expecting to see Incredibles 2 so high. The movie will be out in June, nearly 14 years after the first.

What superhero film are you most looking forward to in 2018?