Research: An Investigation on How Making a Murderer Made its Mark

Ignite Social Media used social analytics to investigate exactly how the world has been watching Making a Murder. Spoilers within.

What have you been doing this month?

Millions of people have decided to immerse themselves in Netflix’s most recent binge-worthy phenomenon – the 10-part documentary series Making a Murderer.

The show follows the controversial case of Steven Avery, who was once wrongly imprisoned for 18 years, released, and then arrested for murder.

The true crime story has been mired in allegations of misconduct and foul play, and has ignited debates about ethics and corruption within our justice system.

If you haven’t watched the show, be advised that the following post contains spoilers.

Come January, it was impossible to get through your Facebook or Twitter feed without being bombarded by the show – people were obsessed with talking about their theories of Avery’s guilt or innocence, and about potential corruption in the justice system.

At Ignite, we used Brandwatch and sampled the incredibly high volume of conversations to take a look at how and when people were talking about the show, trends in conversation, and to get a more true understanding of how online conversations shaped real-world activism.

A hit that came out of nowhere

Making a Murderer dropped on Netflix on December 18, with little promotion or prior buzz, and a release date that coincided with the holiday season. On December 11, Netflix released a short trailer for the show on Twitter that generated a few hundred engagements, but nothing significant.

Conversation surrounding the show was slow to pick up, and seemed to remain relatively dormant until Monday, January 4th, when most people returned back to work.

At this point, the slow build in conversation fell away, replaced by a true viral explosion.

From the show’s launch on December 18 through the end of the year, conversation started on a slow build, gradually picking up steam after Christmas, and then once again after New Year’s Eve.

Although the popularity of true crime documentaries has been building with the success of “Serial” and “The Jinx,” this type of trend in conversation after the release of Making a Murderer was not something that was expected. Why the sudden explosion?

To help better understand what the proverbial tipping point for the show was, we dug further into the mentions to uncover underlying topics.

Other potential contributions to the sudden increase in conversation could be celebrity-related. Stars including Zach Braff, Alec Baldwin, Rosie O’Donnell, Ricky Gervais, and Mindy Kaling (among many others) began tweeting about the show to their vast Twitter audiences, affecting a wave in viewership.

Looking at the way mentions spread, the majority of conversation came from Twitter.

However, by excluding Twitter conversation from the mix, we are able to get a better understanding of how the show began to travel across the internet.

Also around this time, we begin to see mentions from Facebook and blogs emerge, eventually leading to a second, larger, wave of news stories as interest in the show permeates the internet.

What were people talking about?

Based on our research, we know that people were talking about the show, and that conversation grew from a slow build in late December to a frenzy in early January. But what were people talking about?

The show’s main theme – determining Steven Avery and Brendan Dassey’s guilt or innocence in the murder case – made up a significant portion of conversation when it came to discussing the show online.

To attempt to understand how people perceived the trial and its outcome, we set up rules (search queries used to categorize mentions) within Brandwatch to track people talking about guilt, innocence, wrongful convictions and the idea of being framed. Prior to the show’s explosion, the majority of conversation about the defendants suggested that audiences thought they were innocent.

As conversation about the show began to really pick up in early January, a much stronger focus was put on the possibility of Steven Avery being framed by the Manitowoc County sheriff’s department.

The debate of Avery’s guilt also became less one-sided, with  dialogue opening up about the truth behind the murder across the web.

The law, the process, and the people

Beyond Avery’s guilt or innocence, the show also prompted a significant level of chatter about the country’s legal system and public perception of whether or not the defendants got a fair trial.

However, as conversation around the potential of Avery being framed picked up in early January, we also saw an interesting trend in what people were talking about in regards to the justice system, specifically. 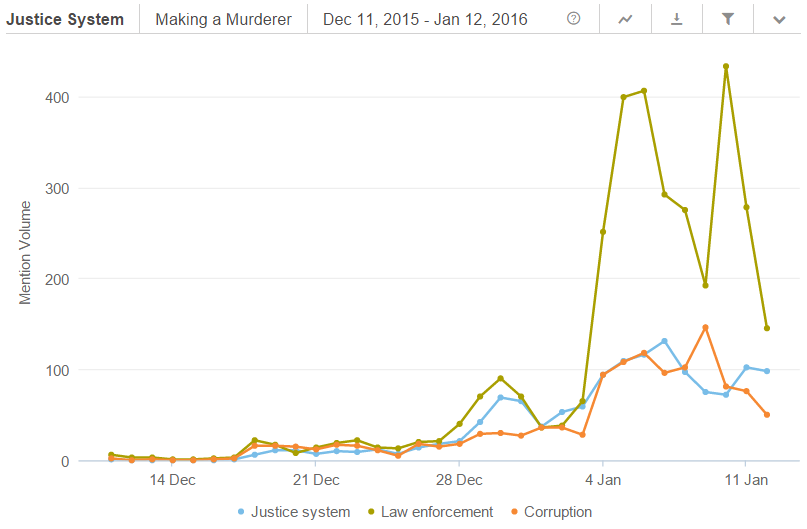 Although conversations around the justice system and corruption remained relatively consistent with one another, the increase in overall conversation brought with it a significant spike in conversations about law enforcement, specifically.

Conversations did not explicitly skew negatively, but a high volume of mentions painted police and law enforcement involved in the case in an unfavorable light, often using sarcasm and implied negativity to express their feelings. 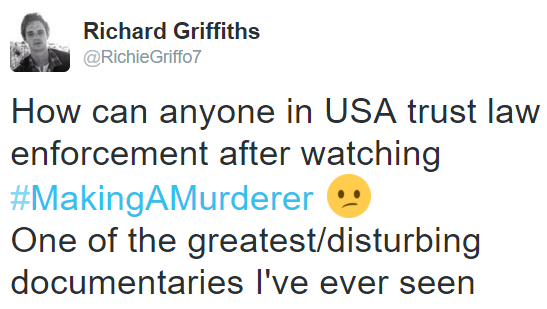 A call to activism

As the conversation online began to shape itself into a clear narrative that Avery and Dassey had been framed for murder by law enforcement and the justice system, the online activism community latched on to the story of the show, influencing trends in conversation. Public perception online of the case and trial, specifically after the show’s viral spread, led to petitions and calls to save or free both defendants, or to allow appeals for Avery and Dassey in light of public outrage from the documentary.

A petition for the President to pardon Steven Avery garnered over 125,000 signatures, which was significant in that the White House was required to respond.

When it was ultimately unsuccessful, new petitions appeared seeking a federal investigation into the case.

The sudden public resurgence of interest and activism surrounding a trial that happened 10 years ago (and was relatively unknown until the documentary surfaced) formed parallels to the Serial case, and marked a trend in the way that true crime shows like these can have real effects on the cases and defendants they cover.

Tracking perception in the court of public opinion

A show like Making a Murderer forms an emotional experience for the audience, and due to the nature of the story, we also set out to track reported emotional sentiment when watching the show.

Based on keywords searches across all mentions, we used Brandwatch to segment mentions by reported emotion. 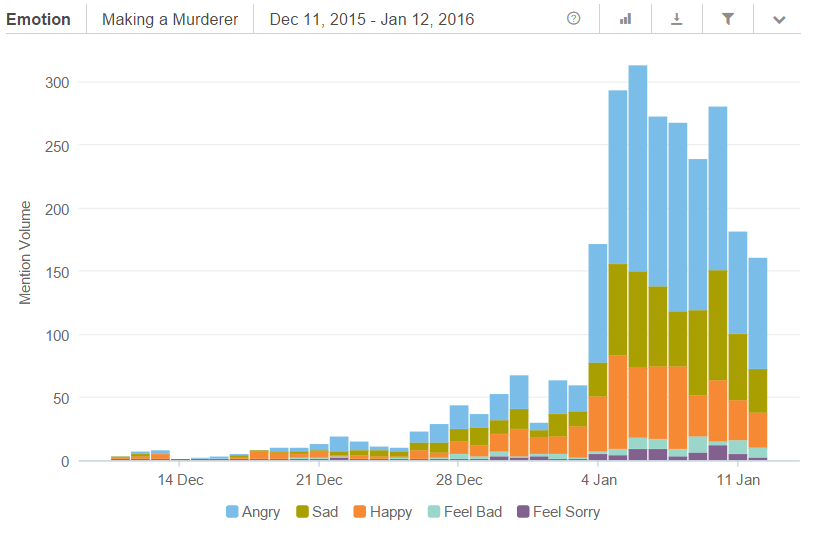 Over time, angry sentiment increased, mirroring the trends in conversation around Avery being framed and law enforcement’s role in the case.

An increase in “happy” mentions also picked up in early January, mostly discussing being happy to have finished watching the show, or glad that the show was able to shed light on systematic injustice and corruption within the justice system.

Although mentions that referenced feeling “sad”, “bad”, or “sorry” for the defendants increased over time, mentions regarding anger and frustration most closely correlated with trends focusing on activism.

Digging deeper into sentiment analysis, we were also able to uncover the “heroes and villains” of Making a Murderer based on how people talked about them in social media.

The players that garnered the most positive sentiment overall were Dean Strang and Jerry Buting, Avery’s defense attorneys, who saw significant mentions in regards to their strong characters, being attractive, and “standing up for the little guy.” 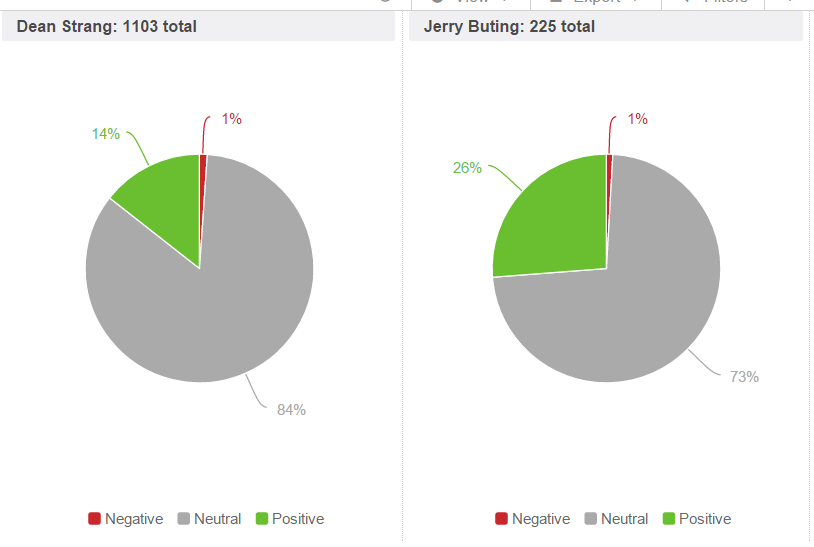 On the opposite side of the spectrum, many individuals connected to the case drew a significant amount of negative sentiment from audiences, with heavy negative feelings directed at prosecuting District Attorney Ken Kratz and private investigator Michael O’Kelly, who allegedly coerced Brendan Dassey’s written confession.

Audiences responded very negatively to Kachinsky, most often commenting on thoughts that he handled Dassey’s case poorly and calling his professional integrity into question.

Negative mentions against Kratz, O’Kelly, and Kachinsky often included personal attacks on their character and allegations of unethical behavior.

What can we take away from all of this?

When it comes to Making a Murderer and the cases against Steven Avery and Brendan Dassey, we can never be sure what really happened.

However, we were able to garner some significant insight into how people learned of the show, how conversation spread, and how people reacted to the facts that Making a Murder presented.

In terms of what the data shows, the most compelling and insightful pieces of information lie in conversations that were sparked by the show, and what those conversations led to.

In particular, conversations about problems with law enforcement and the justice system were followed by online activism that directly affected what was being done in regards to these 10-year-old cases. 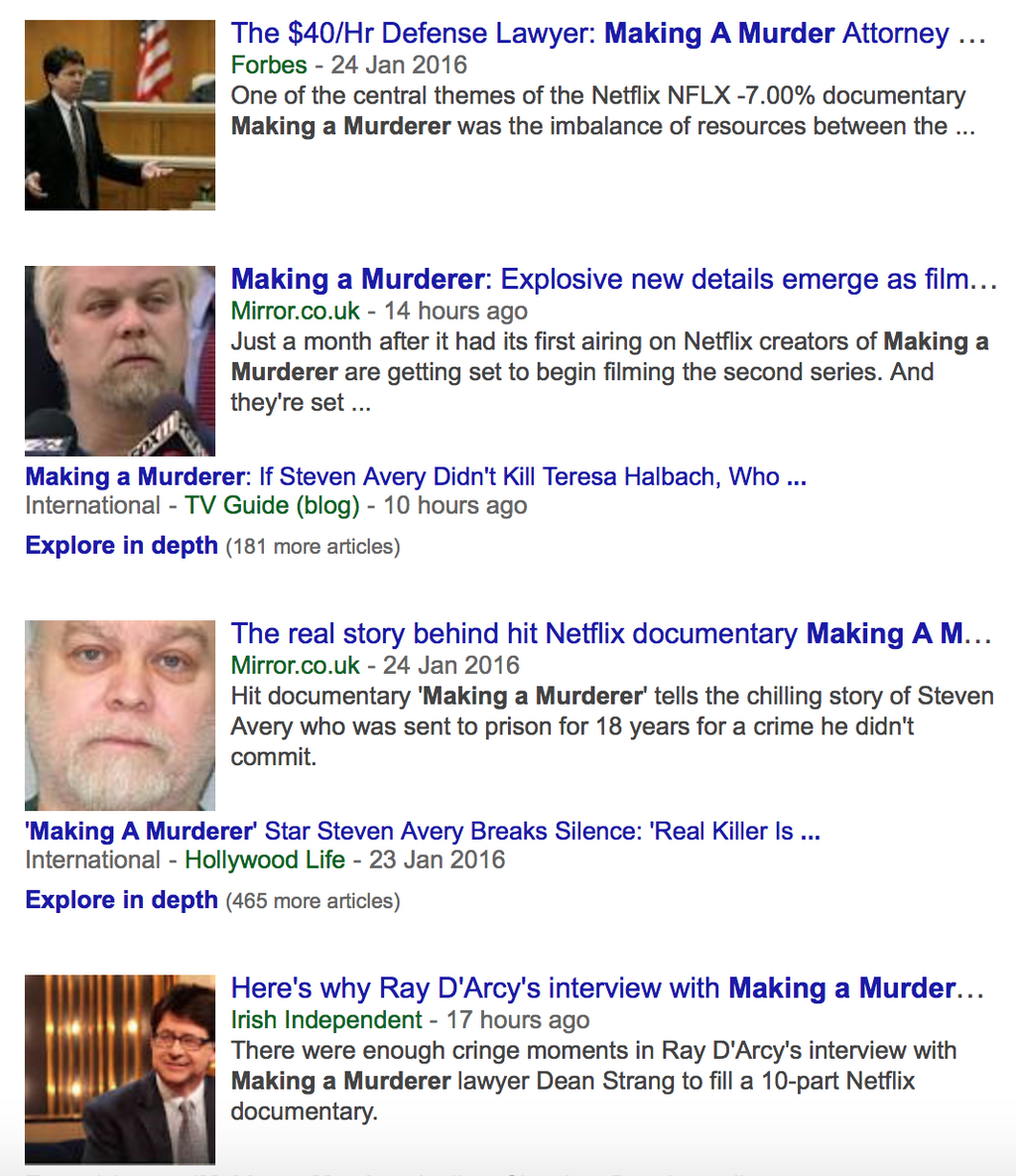 The slow build of chatter related to the show over the holidays led to a viral explosion of Making a Murderer in early January, providing a rarely seen trajectory for a show with very little promotion prior to launch.

This sudden exposure has made a once-little-known case in a small town in Wisconsin into national news, and the component that social media plays in the exposure and debate around this story is key in helping to understand the trajectory of public opinion and activism.

With this kind of almost overnight success and interest in one of their shows, the silent winner (in branded terms) is Netflix.

Using content as a catalyst for conversation (as opposed to prior promotion), they have succeeded in generating a nationwide binge of their show based on controversy and online conversation, and it will be interesting to see how Netflix goes about creating and promoting content moving forward.

Will the Making a Murderer model serve as the beginning to a new trend?