Tonight RuPaul will name the winner of the first ever RuPaul’s Drag Race UK. But which queen has won the hearts of the nation?

RuPaul’s Drag Race has proved itself very much at home in the UK. Not only has it been met with a ton of online praise for celebrating and elevating the British drag scene to a whole new level, it’s also been renewed for a second season!

Throughout the BBC Three series we’ve seen each queen come into their own, with unique catch phrases, gags, and looks. We’ve also seen important opportunities for education, with the contestants sharing their experiences of getting to where they are now, from living through Section 28 to overcoming drug addiction.

But we’re not just here to fangirl about the show. We’re here to crown the first ever Drag Race UK Queen of Social.

Let’s start by going through the three finalists one by one.

1. Baga Chipz’ top mentioned episode was number 7 as people celebrated her making it to the top 3, and commented on how she spoke about her mum on stage.

2. The week of episode 6 saw Baga get lots of mentions after she shared this catchy song on Twitter:

3. Baga’s third most mentioned episode was the first – she was named by many people as a favourite to win the competition.

What we see above is a bit of a rise and fall for Baga. She may have been an early favorite and gained momentum as she solidified her catch phrase ‘Much better!’ throughout the series, but her on-stage comments about her mum may have seen some drop her as a favorite.

The Vivienne by episode:

1. The Vivienne’s top mentioned episode was episode 4, in which she was praised for her portrayal of Donald Trump in the Snatch Game.

2. The Vivienne’s win in episode 1 was up for debate, with some saying Sum Ting Wong should have taken the coveted Ru Peter badge. Mentions during this time also included people picking The Vivienne as their favourite to win.

3. Episode 6 saw many share their thanks for The Vivienne’s hopeful story after they talked about drug addiction on the show. There was also a wonderful moment at the end of the show when she and Baga Chipz attempted to hug but were impeded by their oversized headwear.

The Vivienne is tough competition – she’s been known for her consistent high performance throughout the show. Despite a small blip in girl group week (which didn’t register massively in terms of social media mentions), she’s had some great moments that have caught social’s attention (her Donald Trump impression was absolute fire).

1. Divina De Campo’s top mentioned episode was episode 7 as people celebrated her making it to the top 3.

3. Divina got a spike in mentions on the week of episode 6 when her girl group The Frock Destroyers were featured on MTV, and as people defended her against The Vivienne’s sass.

Divina De Campo’s had a rocky time throughout the season. At some points, while contestants like the Vivienne have seemed a bit more composed and methodical, Divina’s come across like a raw (but relatable) hot mess. That said, she’s had some epic moments. Her performance in the last episode, in her famous red wig and silver dress, is just one of them. She’s frocking destroyed the competition, in my opinion. And she did it alongside the youngest ever Drag Race participant!

Now let’s get to the important bit – may the best woman win.

The results are in, and the queen that’s stirred up the most conversation is… 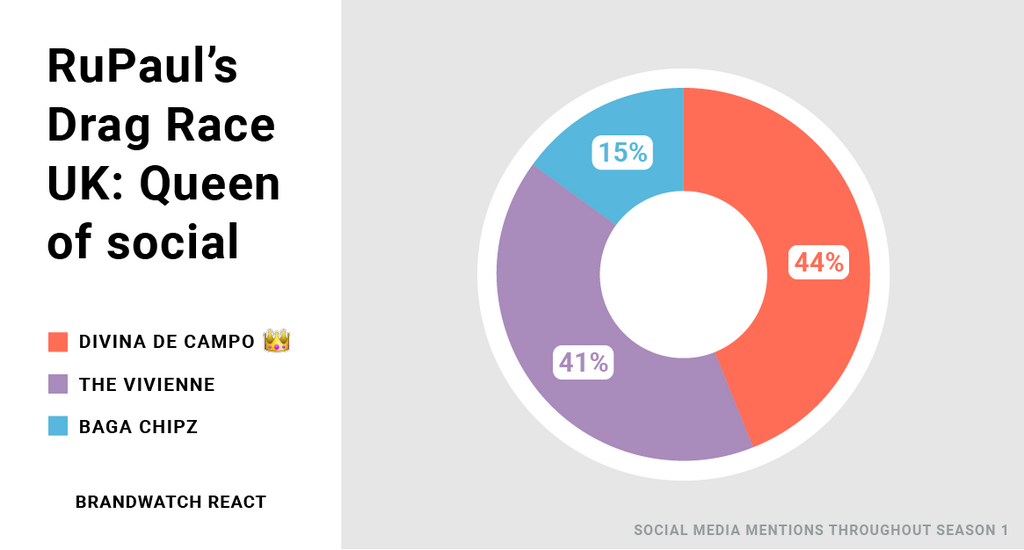