Sponsors and Swimming Pools: The Olympics on Social So Far

The Brandwatch React team analyzes the conversation surrounding the Olympics on social media so far. Here's the data on the sponsors, athletes and sports.

The Olympics is well underway with medals being handed out left, right and centre. But what role is social playing so far?

From awe-inspiring performances to green swimming pools, the online conversation is absolutely buzzing with Olympic spirit.

We took a look at mentions across social between August 5th – 11th to see how things have gone down on social so far.

One man takes over the conversation

Looking at the keywords jumping out of the conversation, teams (USA and TeamGB) and the official hashtags are certainly some of the most used, alongside the expected “gold medal” and “congrats”.

Only one athlete made it into the topic cloud but they are absolutely dominating the conversation.

Michael Phelps is without a doubt the king of the Olympics on social so far – he’s generated an approximate 400k mentions within the overall Olympic conversation. This quote, retweeted nearly 50k times at the time of writing, has propelled him into the newsfeeds of people who might not even care about the Games.

In other conversations, seeing 16-year-olds compete in the Olympics has definitely put life into perspective for some tweeters.

While these are the top mentioned words, it’s worth noting that the official sponsors are nowhere to be seen. Taking a look at the volumes we’ve seen McDonalds and Coca-Cola and Samsung race ahead of the others, claiming huge chunks of the sponsor related conversation.

Getting sporty on social

Not all of the different disciplines are underway just yet but these are the top ten that have got people talking on social media. Gymnastics and swimming have definitely captured our attention, with around 200k mentions of each sport. 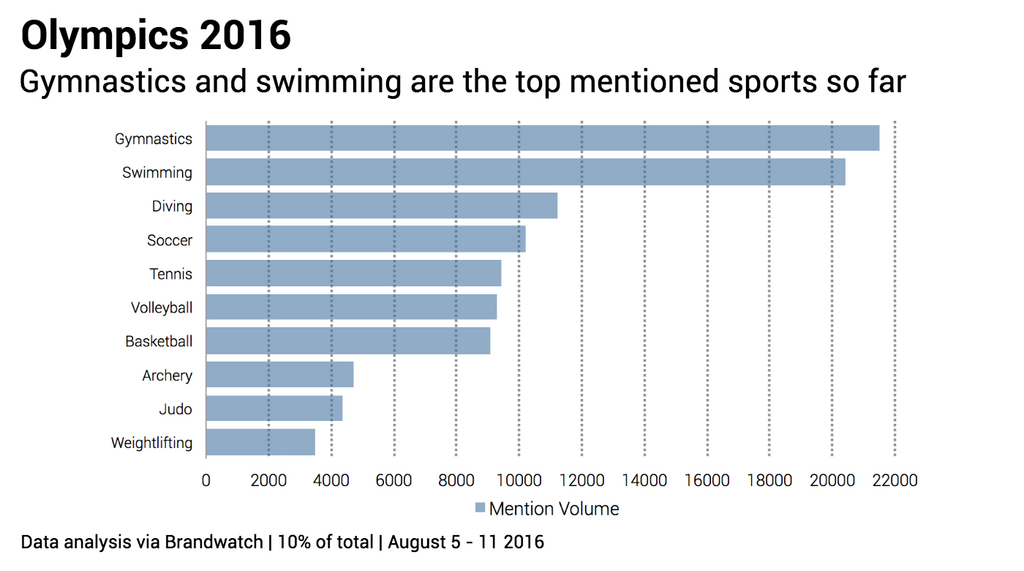 Within the gymnastics conversation, Simone Biles is the athlete being mentioned most. She’s definitely one of the standout stars of this year’s Olympics so far.

Breaking down sport related mentions by gender there are some interesting differences – women are more likely to tweet about gymnastics, while men are tweeting much more about basketball. 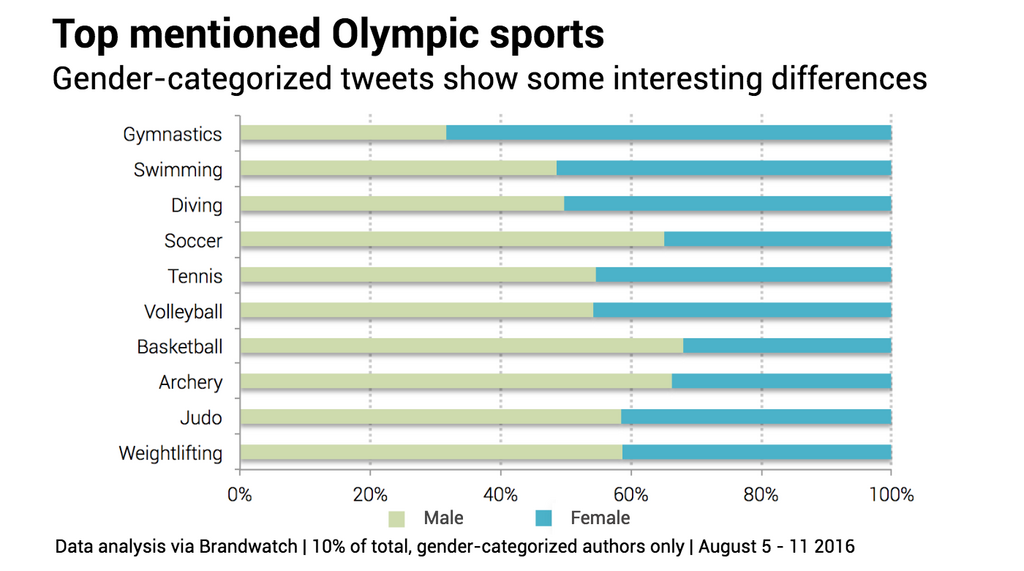 The wider Olympics conversation is a little more balanced than the above chart suggests. While it may appear that men are tweeting more about the different sports we’ve found a 49% female, 51% male split for gender-categorized authors talking about the Games in general.

From BMX to equestrian sports there’s something for everyone, and there’s a lot more to come.

One important question remains, though.

When will #PokémonGo be an Olympic sport? #Rio2016