The Great British Bake Off Winners According to Twitter

So, last night saw not only the postponing of the England vs Poland match, but also the tense final of everybody’s favourite oven-based show, The Great British Bake Off (GBBO).

This series we have seen everything from chilli sugar to union jack cakes to little edible swans. Not to mention several sightings of the GBBO squirrel and enough puns to make even Mary Berry weep (soggy bottoms, anyone?).

The final attracted a massive 7.2 million viewers at its peak, way above the average viewing figures for the show. This has led to speculation that the show will be promoted to BBC One next series.

In the end, it was surprise winner John who took the crown of best baker, fighting off competition from calm and precise Brendan and experimental but chaotic James.

Sadly, now it’s all over and you will no longer be able to spend every Tuesday evening watching Paul Hollywood crushing bakers’ dreams with a dismissive stab of a fork, nor be able to continue gasping in awe at the amazing sliding oven doors. 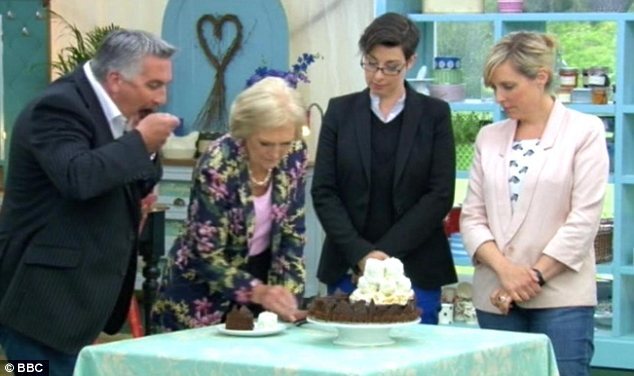 We know it’s sad, but please stop crying into your iced bun for a moment and take a look at our findings on how Twitter users perceived the show.

Twitter conversation about the show was common throughout the series, of course seeing a peak in mentions each Tuesday evening. With all three finalists having a Twitter presence, viewers could wish them luck and discuss their own bakes, as well as chat about the show in general.

The official GBBO Twitter account has a nice tone itself, being both promotional but also fairly amusing, and interacting with fans throughout the series.

Opinions seemed to be divided on the contestants in the run up to the final, but going on tweets from last Wednesday through to the start of the final last night, it seemed that James was generating a lot more buzz than the other two.

This could be due to his Heston-style baking experiments, his penchant for knitwear or the fact that he manages to produce successful bakes (and be crowned star baker three times) despite looking confused and hectic 99% of the time.

We can see that he dominated a massive 56% of all GBBO conversation on Twitter since last week’s show up until 8pm last night. For many, it seemed that the contest was between Brendan and James, with John seemingly the underdog; a feeling reflected by his mere 21% of GBBO chat. Very little conversation for all the contestants was negative.

This raises the question: Would James have won had the final been up to audience votes? These Twitter stats certainly seem to suggest so.

So, how about the three challenges of the night? Despite James’ chiffon sponge disaster, it was the fondant fancies that gained the most attention on Twitter.

We’re assuming that this was because this was the challenge that all three contestants did not do spectacularly well at, rather than a sudden revival of interest in the ’70s teatime treat. 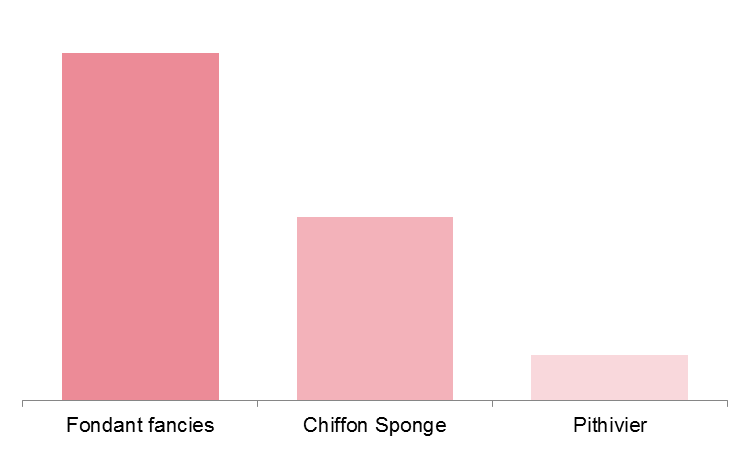 We also pitted the two presenters, Mel and Sue, who are the female, cake-loving version of Ant and Dec, against one another to see which of them were exciting Twitter users the most.

It seems that, during the entire series, Sue outdoes Mel significantly, featuring in three quarters of all GBBO chat mentioning either of them during the series, possibly due to her larger share of puns about buns during the shows. 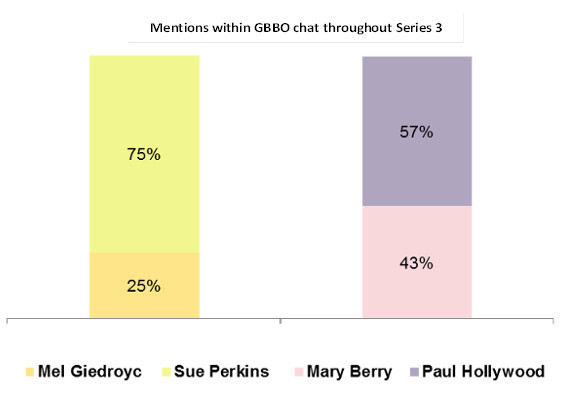 When it comes to the judges, both silver fox Paul Hollywood and baking legend Mary Berry attracted lots of chatter, but Hollywood took the lead, dominating conversation about the judges with a 57% share.

It’s fair to say that Hollywood, who manages to be both mean and charming simultaneously, has a fair few female fans out there, which could be the reason for his larger share of conversation.

So, what did you think of the final? Were you pleased that John won, or did you want to see one of the other contestants to hold the circular trophy?

Finally, to ease the pain of no longer being able to see Mary Berry tucking in to delicious foodstuffs on a weekly basis, here’s a blog of images of her doing just that: maryberrybitingintothings.tumblr.com