As Londoners prepare to either keep faith with Boris Johnson or return Ken Livingstone to City Hall on Thursday, Brandwatch, a leading social media monitoring tool , analysed the election landscape on social media since April 1 to gain insight to the online strategies used by the leading candidates and uncover any pointers to the eventual poll result.

The buzz around candidates’ names, nicknames, popular hashtags and Twitter accounts was monitored across UK social media from April 1 onwards. The findings shown on figure 1 reflect the neck-and-neck nature of early opinion polls, with Boris making a late surge thereafter. 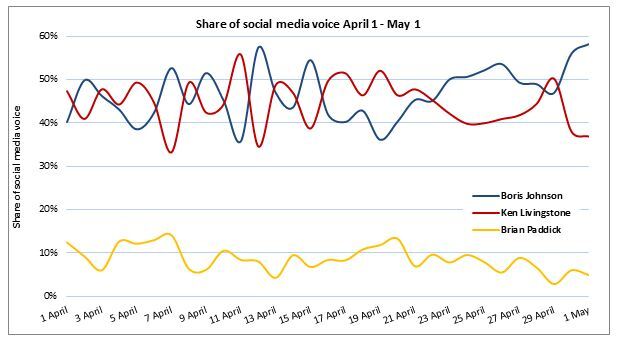 With the exception of Sunday April 29, when Ken Livingstone buzz was driven by a scathing piece by Lord Sugar in The Sun on Sunday , Boris has dominated the social media battle over the last 10 days. The Conservative candidate’s share continues to rise as polling day approaches.

Boris and Ken are frequently mentioned together online, which may account for the above correlation, so Brandwatch created a distinction in the search to show the extent to which each was mentioned in isolation (figure 2). Share of voice is more polarised for standalone mentions of each candidate.

This bodes well for Boris, with his visibility further exaggerated over the last 10 days. 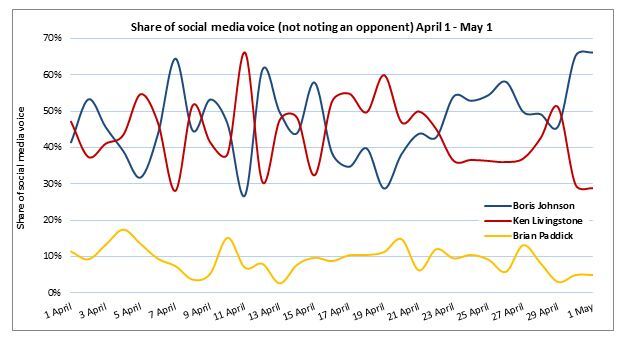 Further scrutiny of this discussion uncovers which of the 15 City Hall priorities are more visible within discussion of each candidate on social media.

In what has been a personality contest from the outset, the proportion of conversation noting policy areas may also hold clues to the reasons of voter-attraction towards each runner.

Of the two leading candidates for Mayor, conversation of Boris online was more likely to discuss policy areas overall (44%) than discussion of Ken (41%). 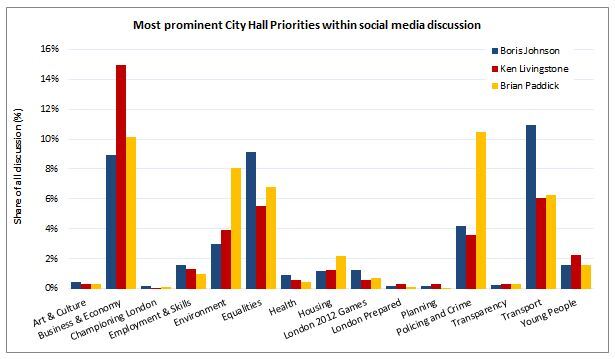 As shown on figure 3, ‘Business and Economy’ was by far the campaign issue most linked to Ken, whilst Boris’ online chat spread wider, covering not only this subject but ‘Transport’, ‘Equalities’ and ‘Policing and Crime’.

Could Boris be winning the social media race because of a wider appeal? Or perhaps this could be attributed to his performance in these areas over the four-year term in office?

Finally, does popularity correlate with the platform on which conversation is taking place?  (figure 4).

Ken (@ken4london ) is much more popular on Twitter, followed by nearly 27,000 accounts despite tweeting on fewer occasions than the rival Boris stream (@backboris2012 ).

Conversely, on Facebook, Boris generated more than 20-times the number of fans of Ken.

With Facebook and Twitter visibility almost certainly impacting on wider social media performance, this suggests that the former is considerably more effective for generating social media buzz around a Mayoral election campaign.

Did Team Boris get it right?

With opinion polls leaning heavily towards Boris in the run-up to Thursday, maybe the grassroots support for candidates shown on social media does help to unearth the popularity of the Conservative candidate.

Matching Brandwatch findings to opinion poll data, you’d be silly to bet against Boris come May 3.

We’ll have continued analysis on our blog and across our social media channels in the coming weeks, so make sure you check out if our findings were accurate once the election is over.