Find out everything you need to know to get started on Reddit. We've covered users, subreddits, ads and a host other other concepts you'll need to get going.

Reddit is massive. At the time of writing, it’s the sixth most visited site in the world and has 542m people visiting every month. It truly lives up to its “Front page of the internet” slogan with the platform sending stories of all stripes viral.

So it’s no surprise there’s a lot of interest in the site and around what it is, how it works, and who uses it. This guide is going to explain all of that nice and simply so you can get the most out of Reddit as soon as possible.

It is a social platform where users submit posts that other users ‘upvote’ or ‘downvote’ based on if they like it. If a post gets lots of upvotes it moves up the Reddit rankings so that more people can see it. If it gets downvotes it quickly falls and disappears from most people’s view.

Reddit is split out into sub-communities, or subreddits. They can be created by any user around any subject, whether it’s something broad like technology, or as specific as a single joke. Each subreddit feeds into the full Reddit list of submissions meaning a post in any subreddit (unless it’s private) could reach the front page of the website.

While you post on each subreddit in the same way, many have different sets of rules. Be sure to read these before posting somewhere. Reddit is notoriously strict on things like this to keep subreddits on topic and to stop spammers.

For a full explanation on creating your own subreddit head over to our ‘How to Create a Subreddit‘ blog post.

In the simplest of terms, it’s a giant forum made up of lots of smaller forums.

As we’ve previously mentioned, it’s a lot of people, and they’re pretty dedicated users too. But when it comes to demographics, we’re mostly in the dark.

One of the big pulls for Reddit is that it’s easy to be anonymous. You don’t have to supply much more than an email and a username. That said, there has been some research into the subject.

Back in 2016, the Pew Research Study conducted a survey that found Reddit users were 67% men and 64% between the ages of 18 and 29. It also found 70% of users were white. So, young, white, and male essentially. Another study (although likely less reliable) found similar results.

But this does not tell us the whole picture. Coming back to subreddits, it becomes pretty clear that this demographic distribution isn’t uniform across the site.

Being able to create a subreddit on any topic means everyone can be catered for. For example, the TwoXChromosomes subreddit is targeted at women. Then there are others for different ethnicities, countries, cities, and many, many others. In other words, the overall data has a habit of shrouding the kind of diversity Reddit has.

There’s no actual value to this. You don’t get prizes or anything tangible. It pretty much just signposts to others that you’re a good user of the site. Of course, there’s bragging rights to be had too.

Reddit gold is a premium membership option that offers extra benefits to users. This includes turning off ads, ability to create subreddits only for people with gold membership, and the creation of custom avatars. Nothing essential for using the site, simply perks.

An important aspect of this is the ability to gift gold to other users. This has become a common way to show how much you like something someone has posted. A person can gift gold for any reason, but it could come after a great joke, a heartfelt story, or just because someone was feeling generous.

The gold also helps Reddit run the site, with a daily goal box on the site at all times. It’s understood that if the target is met, that covers Reddit’s cost for the day, although this isn’t 100% confirmed.

These didn’t originate on Reddit, but they’re probably the most popular venue for them now. AMAs are exactly what they sound like. A person puts themselves forward and answers questions on anything and everything from users on the site.

On Reddit, there’s a whole subreddit for them, r/IamA. These set the format of “I am a ***, ask me anything.” The stars could be replaced with anything from ‘baker’ to ‘nuclear physicist’. Now other subreddits will conduct their own AMAs based on their specifc subject, such as an AMA from a conductor in a classical music subreddit.

This format has become hugely popular. SO much so that a number of celebrities have taken part including Arnold Schwarzenegger, Barack Obama, and Neil Degrasse Tyson.

Although you can stay anonymous, Reddit will still keep a track of your activity on the site. This will include a list of your submissions, comments, and a tally of your karma. It will also show how much Reddit gold you’ve bought, your trophy case of achievements, and the subreddits you moderate.

They’re very straightforward and simple, but Reddit has plans. They’re currently rolling out new profiles which allow you to choose a picture, include a bio, and write posts to your page. It’s nothing major, but many in the community were worried Reddit was trying to become more like Facebook or Tumblr. There were also concerns about the anonymity offered by the site.

While all users will have to accept the new profile, the ability to stay anonymous has remained unchanged.

Reddit users are notoriously protective of their subreddits and communities. It’s not uncommon for a new user to annoy others with inappropriate behaviour. This is particularly true for the marketers who have swarmed the platform and posted their content here, there and everywhere.

So, if you want to get the most out of Reddit here’s some tips to not getting banned from a subreddit with your first post:

Essentially this is Reddit’s set of rules and behaviours for using the platform. You can find it here.

There is nothing too surprising here and many rules are used on plenty of forums online. You can be more lax with some depending on the subreddit. For example, some communities won’t be strict about proper grammar and spelling.

Read through this at least three times, and come back to it for a refresh every so often. It’ll keep you on the straight and narrow.

This is massively, massively important. Many subreddits have very specific rules around what can and can not be submitted, the formatting of titles, and acceptable image types. Here’s a quick sample from r/technology: 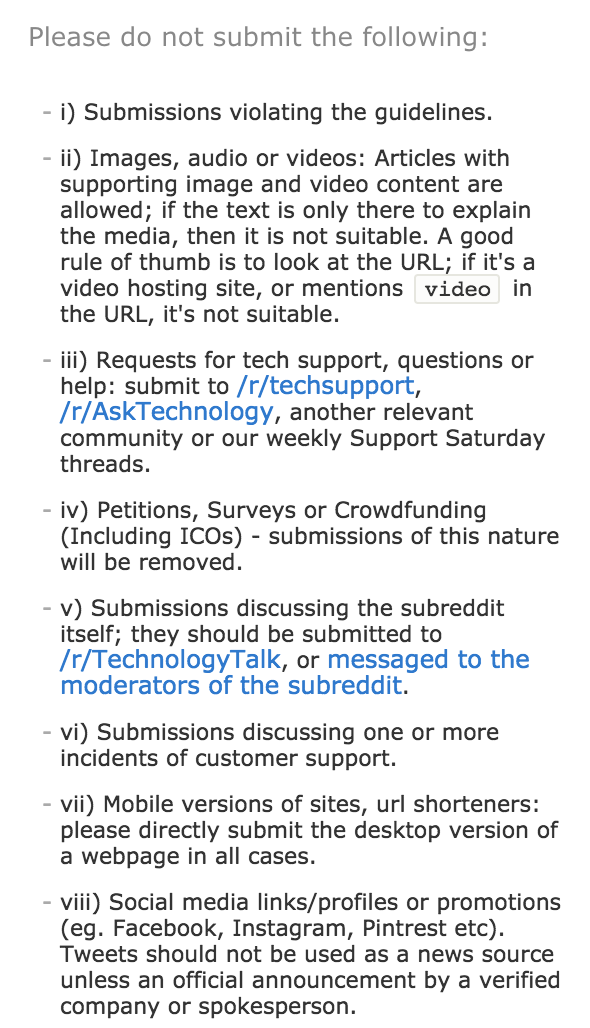 As you can see there’s specific directions, advice on where to take certain submissions, and what kind of links you can submit.

The aim of this is to ensure the quality of subreddit by keeping things on topic and stopping the place filling with spam.

Failing to follow the rules will get your submissions deleted and, if you keep breaking them, eventually you’ll get blocked from the subreddit entirely.

Put in as much as you want to get out

Reddit is, ultimately, a community. Use it properly if you have the time. Submit things you like, join lots of subreddits, comment on other people’s stuff, and upvote and downvote. There is something for everyone here, so there’s no excuses!

It’s a great way to connect with people from all over the world, learn lots of interesting and weird things, and help others. While like any other large website Reddit has its toxic aspects, in the end the site can be hugely rewarding. Especially if you can get to the front page of Reddit.

Just like most other social platforms, Reddit shows ads. They’re fairly simple with a mix of banner ads and ones that look like normal subreddit submissions. You can see them both highlighted in red below:

An increasing number of marketers and companies are coming to Reddit to advertise. Along with the high levels of traffic, due to the nature of subreddits being hyper-targeted ad personalisation is very simple and easy. You can also get a deep insight into the people you’re aiming to advertise to by just reading their submissions.

At this time, Reddit ads are also very cheap compared to platforms like Facebook. This will obviously change as more people make use of Reddit ads, but in the meantime it’s a great place to get cheap and relevant traffic to your site. To find out more, you can head to the Reddit Ads page.