Which Football Sponsors Get The Best ROI?

Over the last 180 days (June 16th – Dec 12th)  we used Brandwatch Analytics to research the value of soccer kit sponsors in Europe.

We focused our research on the four largest kit manufactures; Adidas, Nike, Puma and Under Armour.

Using Image Insights, our logo detection feature, we set out to discover:

How we collected the data

Specifically, we collected every image on those sites that included a kit manufactures logo and the club it sponsors. For example, the image below would count as a Puma image for Arsenal:

The total mentions collected over six months were multiplied by two to forecast how many mentions each sponsor would receive over a whole year.

We only monitored clubs if they were sponsored by Adidas, Nike, Puma or Under Armour and if we could find the finances behind the sponsorship.

Here are the clubs and sponsors that were pictured most online: 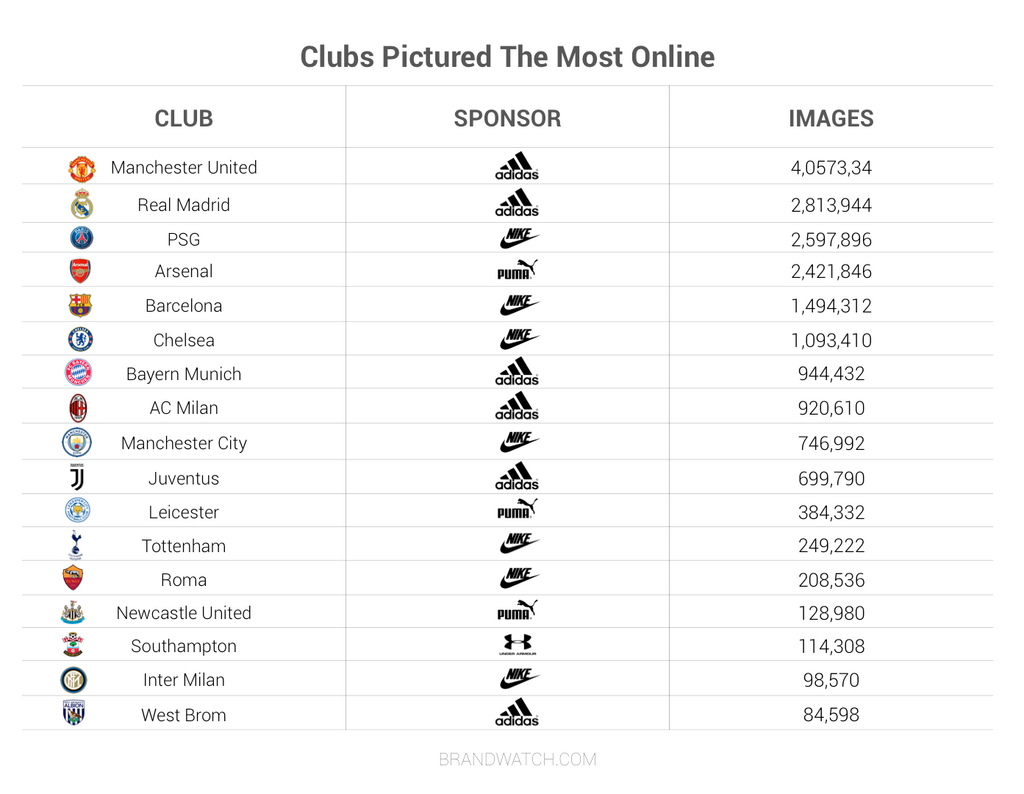 This analysis provides an interesting look at true visibility online, but it doesn’t represent the real ROI of each kit manufactures investment.

To understand that, we divided the total images each sponsor received by the amount paid for their sponsorship.

This showed exactly how much each sponsor paid per image:

The best ROI in football sponsorship Incredibly Leicester and their kit sponsor Puma lead the way. The cost per image for this sponsorship is just £2.60.

At the other end of the scale is Inter Milan. Nike pays £68.82 for each image it receives alongside Inter.

Across the dataset, the average cost per unique image is £43. This is before shares, likes, comments and other engagement metrics are included – which could increase the total reach. 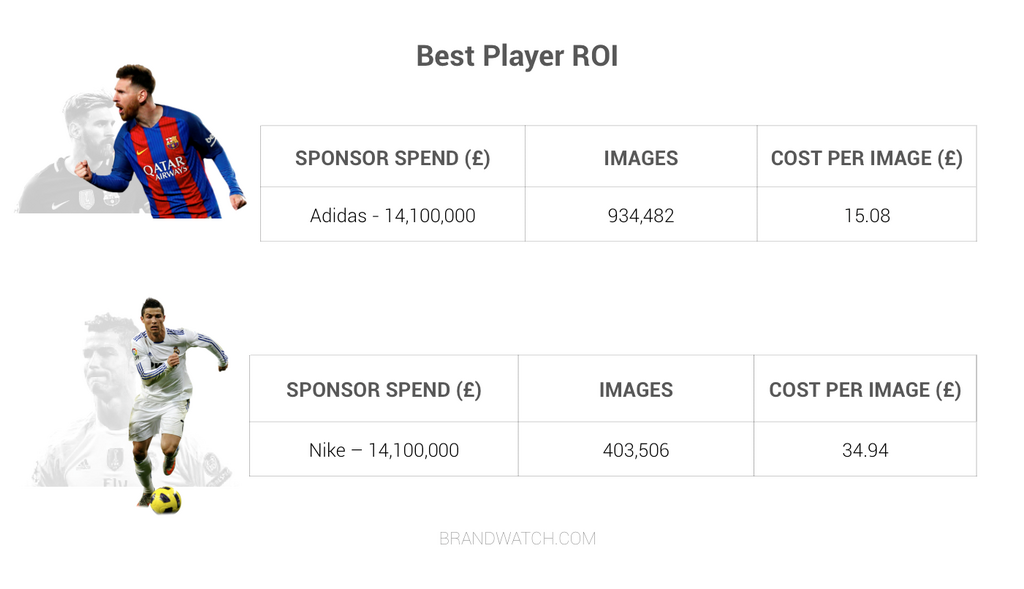 Taking a closer look at the data, we found 5 surprising insights:

Puma performs incredibly in this analysis.

One of the reasons for this is where they position their logo. Unlike other brands, Puma also places their logo on the sleeve of their kits:

No other kit sponsor does this and it appears to greatly increase their visibility.

Antonio Rüdiger “I’ve followed Arsenal since Henry & Bergkamp. I have an Alexis kit. My heart beats for Arsenal” #afc pic.twitter.com/ppYo1O7od7

Puma is also fortunate to sponsor clubs with managers who tend to wear their clothing.

Wenger on Pochettino ruling Spurs out of title race: “I am not Pochettino, I am Arsene Wenger. I am here to fight as long as I can.” pic.twitter.com/H9PXAPVuda

Ashley Barnes admits he is surprised more clubs are not trying to lure Sean Dyche from Turf Moor. https://t.co/y4tIvieb0O pic.twitter.com/qYPcIwMSwB

PSG and Nike come in second place, generating an image for every £7.31 spent.

Although this is helped by the clubs’ stature and its presence in the Champions League, the main reason behind the position is Neymar.

The chart below reveals all of the images for each club over time (10% sample):

PSG and Nike’s spike on the 3rd of August dwarfs every other event over the last 180 days.

In fact, on that day they generated an incredible 142 new unique images every minute.

Neymar’s record-breaking transfer from Barcelona to PSG caused this incredible spike for Nike.

While this could be expected for such an incredible move, Nike should still have PSG to thank for including their logo in the flagship post:

No other image achieved the same volume of engagement during our analysis.

One of the reasons behind this success is Arsenal’s goal gifs (used to announce every goal):

Other clubs don’t promote their sponsor’s logo in the same way.

It’s probably not something sponsors demand in their negotiations with clubs, yet it’s clearly a smart way to boost visibility.

Roma is a Champions League club.

They feature heavily in the fight for most Italian competitions and they have a team of well established international players.

Despite this, Nike pays the club just £3.5 million per year to sponsor the team, less than Southampton and Newcastle’s deals.

AC Milan and Inter Milan were paid £19m and £15m for their sponsorships this year, yet neither featured in the Champions League.

Roma can and should use insights like this to negotiate a better deal with their current sponsors or to look elsewhere.

Despite a good deal with Roma, it’s clear that overall Nike struggles to generate the same ROI as its rivals, Adidas.

However, Adidas are included in 95m images alongside their clubs, while Nike appears in just 64m.

The American brand spends much more but with an astonishingly low return on investment.

This report confirms the importance of logo detection.

It reveals insights most brands miss. Without an effective logo detection tool, you’ll fail to really understand your visibility online.