We take a look at two major organizations in the American healthcare industry: Blue Cross Blue Shield and Kaiser Permanente.

Welcome to the fourth in our monthly social presence showdown series, where age-old disputes between industry titans are settled through the analysis of social media data.

To say the least, the healthcare system in the US is incredibly complex. Kaiser Permanente defines itself as an integrated managed care consortium, while Blue Cross Blue Shield is actually a federation of health insurance organizations.

That introduces some complex considerations into this analysis.

Yet comparing these two brands could provide insight into the way the public perceives each structure.

Still, despite the distinct structures of these two healthcare organizations, it’s possible to compare these brands using social media conversations as the common denominator.

Now, for the data dump.

Let’s start with a basic overview of the two brands.

Kaiser’s dominance in volume of conversation may be unsurprising given that @KPShare has four times as many followers as @BCBSAssociation and Kaiser’s Facebook page has 2.85 times as many likes as Blue Cross Blue Shields’ page.

The volume and sentiment analyses provide a basic overview of the way brands are discussed, alerting us of any dramatic differences. However, they do not provide enough context to genuinely understand the dialogue surrounding the two brands.

At the most basic level, Blue Cross Blue Shield and Kaiser Permanente function to provide citizens with healthcare services, an objectively positive mission. However, there is still an enormous number of Americans disgruntled with the way our healthcare system is run.

A quick analysis of the negative conversations directed at these brands reveals some of the central issues surrounding healthcare.

Topics of Concern by Organization

Cost stands out as an overwhelming proportion (51.1%) of the overall complaints in this analysis. 69.6% of the complaints directed at Blue Cross Blue Shield were regarding Cost.

Calling was a much larger issue for Kaiser (23.7%) than it was for BCBS (9.6%). Looking at the specific complaints revealed that consumers were dissatisfied with how difficult it was to make an appointment and how much time the phone process took.

Customer Service is a bigger issue for BCBS (14.3%) than it was for Kaiser (9.9%). One specific concern was customer service agents that put callers on hold or rerouted them through their system.

As aforementioned, Blue Cross Blue Shield is a federation of 38 separate health insurance providers across the United States. As such, their reputation may vary across states.

The below analysis reveals which states mention which brand more often on Twitter. 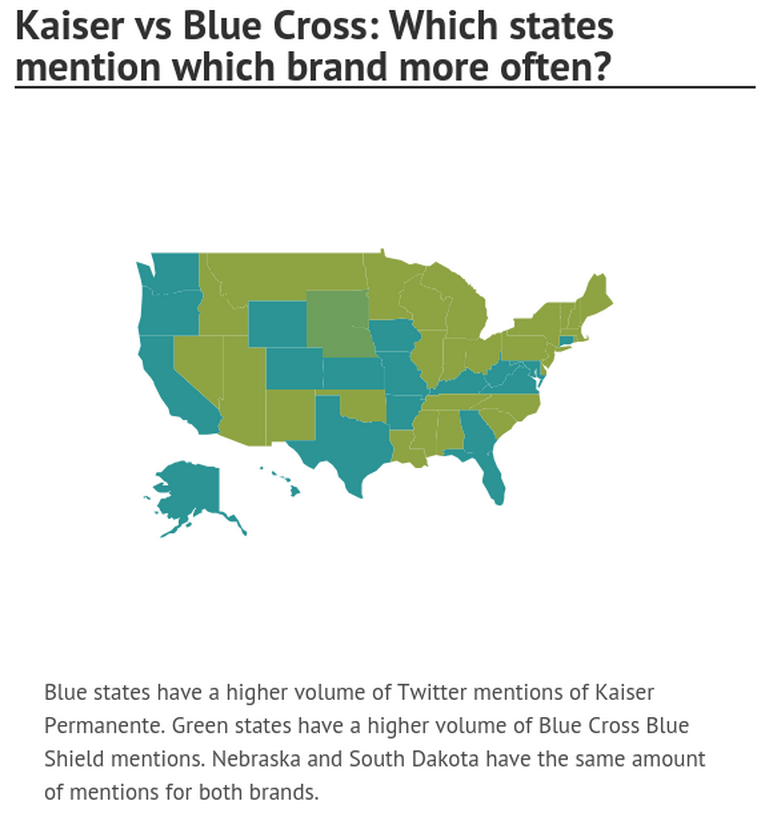 In total, Kaiser is mentioned 1.8 times as often as BCBS is in the United States despite maintaining fewer locations. Kaiser’s presence is stronger in the Mid-Atlantic, Colorado, Florida, Texas and along the West coast. Predominantly a California-based organization, they receive over 18 times as many mentions in the “golden state.”

Blue Cross Blue Shield seems to receive more mentions only in the places where Kaiser’s physical presence is lowest. However, they do have a stronger online presence in New England, maintaining 1.4 times as many mentions in Massachusetts despite Kaiser’s offices there.

This analysis sheds some insight into the ways patients perceive Kaiser Permanente and Blue Cross Blue Shield. There are significant concerns surrounding both regarding the cost and the way healthcare services are provided.

While the healthcare system in America is highly complex, for the sake of the showdown, a winner must be decided. Reviewing the social analysis, a few things stood out:

Second, Blue Cross Blue Shield’s online reputation is disjointed. While they generated strong chatter around their value-based care model in Illinois, their proposal to raise rates for the Affordable Care Act plans in North Carolina was largely unpopular.

For those reasons, Kaiser Permanente is the winner of this month’s social presence showdown. Perhaps Obama was right to advocate for Kaiser’s integrated model.