All the social data from the biggest Grammy awards in years.

The online conversation around 2022’s Grammy awards was the biggest in years. With Twitter fans growing in number and an exciting year of releases in the music industry, we investigated how the 64th Annual Grammy Awards fared online.

Read on to discover the biggest talking points that surfaced across Twitter conversations during the Grammys 2022.

Note on methodology: All the data mentioned here was gathered from 8PM EST to roughly 11:32 PM EST (the time frame of the Grammys 2022 event). All data comes from public Twitter mentions for each award category and associated nominees.

During the broadcast: Minute-by-minute

During this year’s event, there were more than 3.3 million mentions of the Grammys on Twitter. Looking at the conversation on a minute-by-minute basis, we can see how talk grew over the course of the three and a half hour broadcast.

The most notable conversation spike was during BTS’ performance, which racked up plenty of chatter online. 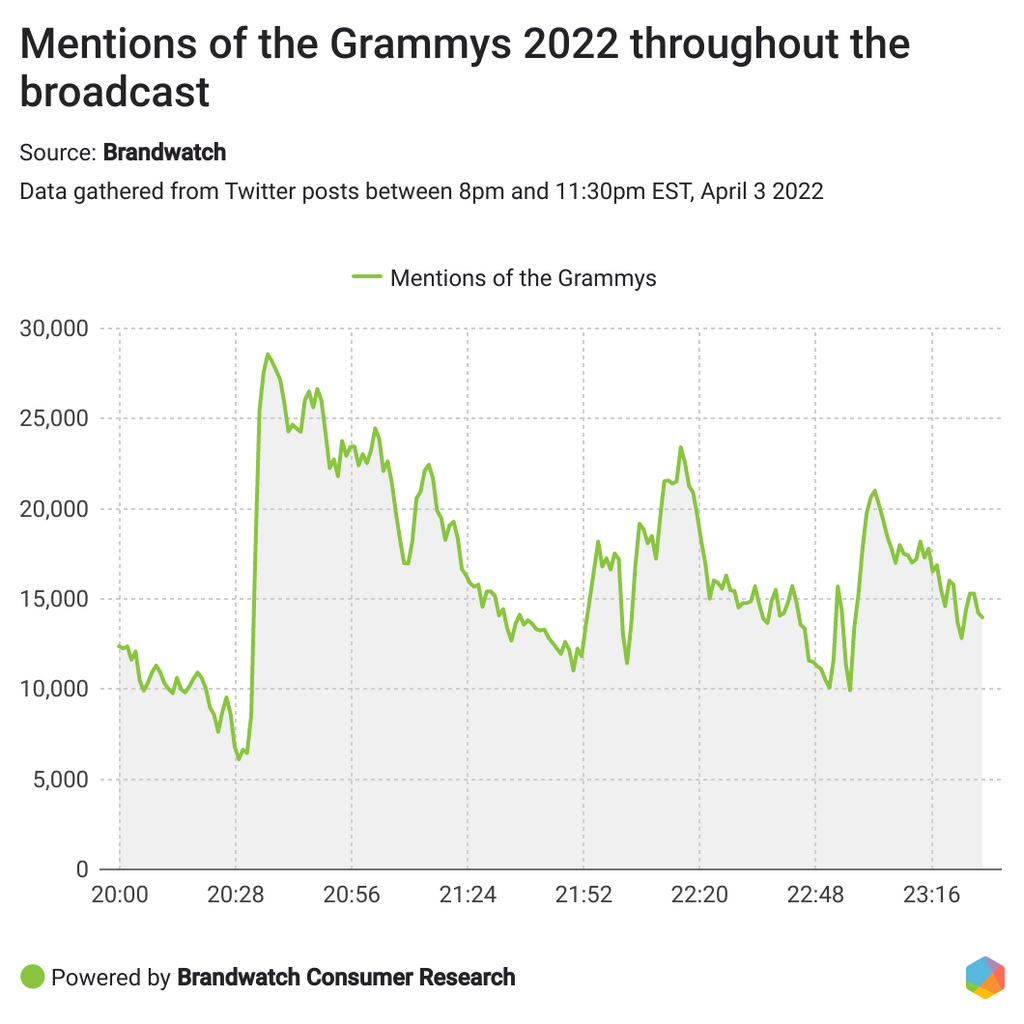 What were the topics people couldn't get enough of on social?

Undeniably, BTS were the biggest talking point of the Grammys 2022. Nominated for Best Pop Duo/Group Performance, this South Korean boyband are notorious for their die-hard Twitter fanbase. Dubbed ‘the Army’ online, BTS fans are always quick on the pulse when it comes to following the band’s ventures.

8 of the top 10 hashtags from the Grammys were related to BTS, with the exceptions being #grammys and #grammyawards. #BTS was the second most popular hashtag from the night with 2 million uses, followed by #방탄소년단 (which translates to BTS in Korean) and #btsarmy, with 583,000 and 419,000 uses respectively.

When looking at mentions over the duration of the broadcast, we saw the biggest spike after BTS performed their song Butter on stage. BTS dominated the social conversation with over 17,460 mentions in a single minute during their performance. 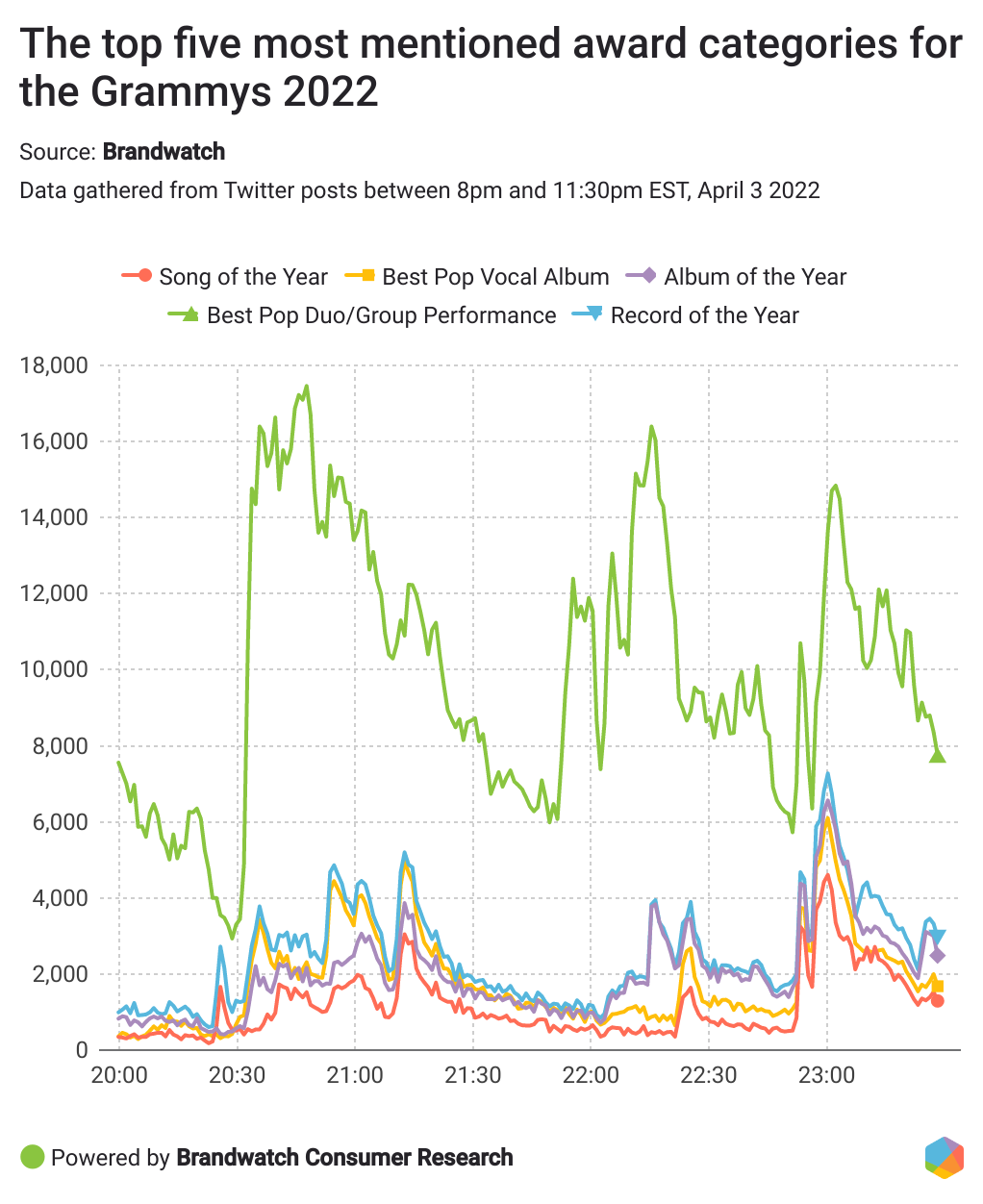 The conversation between BTS fans didn’t stop there. They were the most mentioned performer all night, even topping Justin Bieber and Olivia Rodrigo during their performances.

BTS’ performance wasn’t their only talking point at the Grammys. Small on-screen moments also sent fans into a frenzy, including when BTS member V whispered in Grammy-winner Olivia Rodrigo’s ear. This moment alone was a huge talking point for fans, contributing to the peak in mentions at roughly 8:30 PM.

WE WILL NEED 5-7 BUSINESS DAYS TO RECOVER FROM THIS BTS X OLIVIA RODRIGO MOMENT. #GRAMMYs pic.twitter.com/ZuWChWGS9o

A huge spike in mentions came when Doja Cat and SZA accepted their Grammy win for Best Pop Duo/Group Performance. However, it didn’t go exactly as planned. Doja was late to the stage, as she was in the bathroom when the announcement was made.

This funny moment saw mentions skyrocket, on top of the already high support for Doja and SZA’s win. 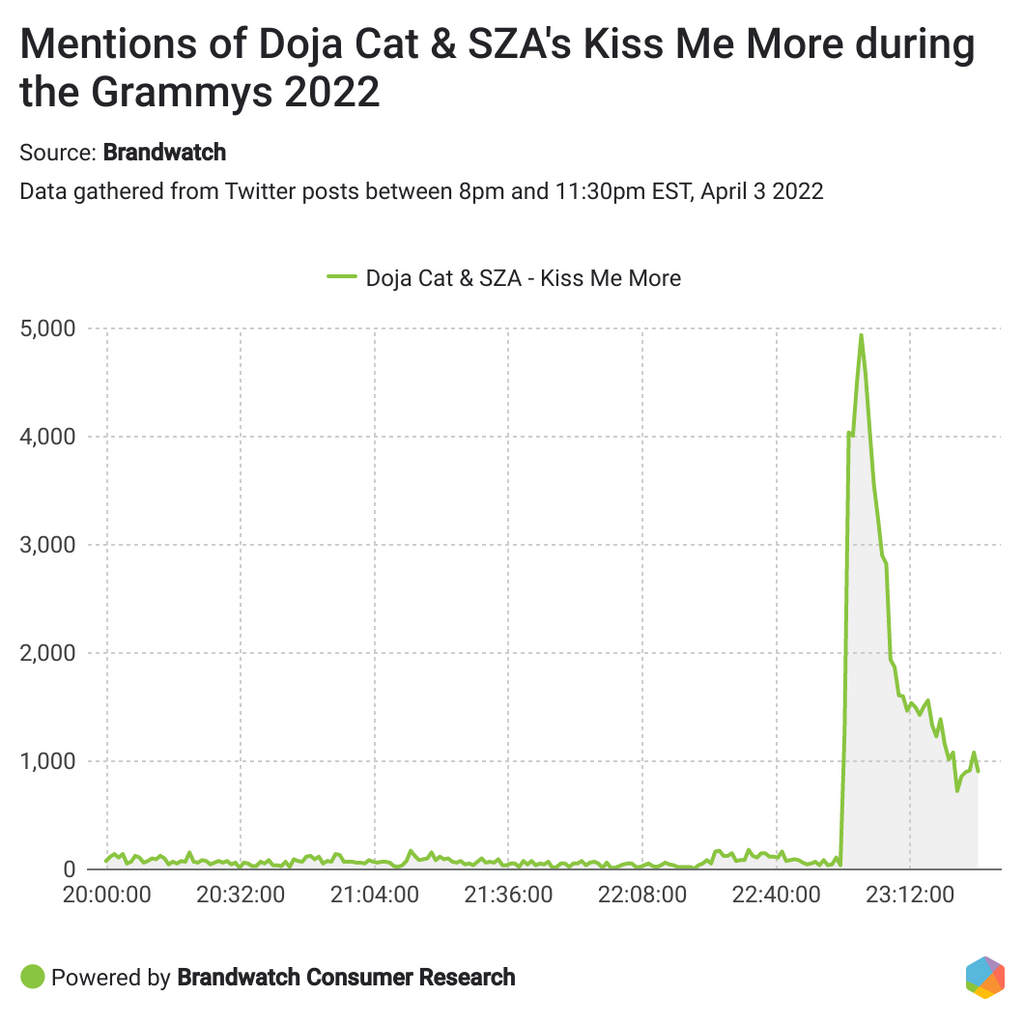 Behind Best Pop Duo/Group Performance, the second most mentioned award category was Record of the Year with over 500,000 mentions. Despite being won by Silk Sonic for Leave The Door Open, the highest mentions for the award went to nominee Olivia Rodrigo’s song Drivers License. 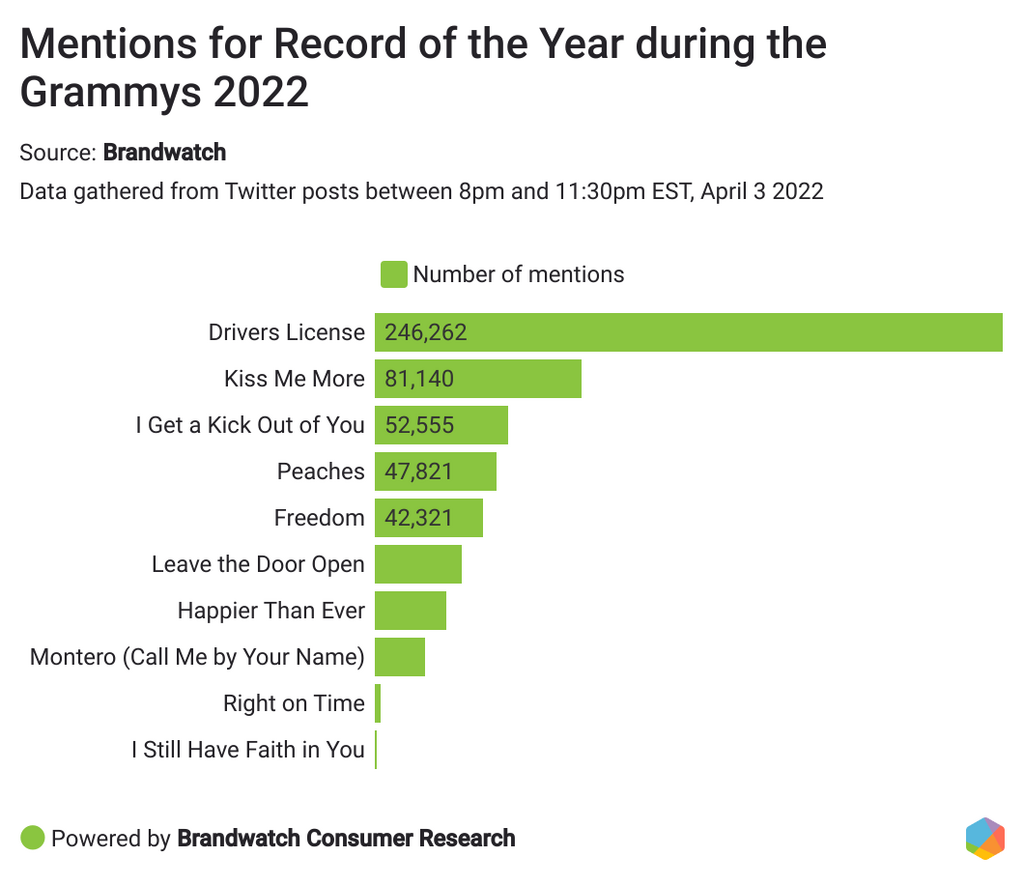 Fans were keen to show support for the first-time Grammy winner throughout the night. Olivia is a force to be reckoned with, and some Twitter users expressed that she’d won more Grammys in one night than Justin Bieber during his entire career. Rodrigo picked up three Grammys this year, for Best Pop Solo Performance, Best New Artist, and Best Pop Vocal Album.

This year, an impressive 68.5% of mentions during the broadcast were categorized as positive. When looking at the sentiment around the performers, the reception to Ben Platt, Leslie Odom Jr, Cynthia Erivo, and Rachel Zegler’s melody performance was overwhelmingly well-received. This was during the In Memoriam segment of the awards, which honored many, including Foo Fighters drummer Taylor Hawkins and Grammy-winning composer Stephen Sondheim.

How does this year’s Grammys compare?

We saw an impressive 46% increase in mentions on the day of the Grammys this year when compared to 2021. This year’s event has actually been the most talked about Grammy ceremony so far online according to the data we’re able to track.

Overall positive sentiment is up too. There was double the percentage of positive tweets relating to this year’s Grammys compared to last year, alongside a 50% reduction in negative tweets. This might indicate a welcome reception to this year's Grammys, with music-lovers getting increasingly involved with the ceremony.

It’s hard to deny the thriving conversation showing support for the Grammys. With double the amount of positive sentiment compared to last year, and an ever-growing number of die-hard fans supporting their favorite artists, the Grammys seem to be bigger than ever. Despite TV ratings around award shows dwindling in recent years – especially with the pandemic impacting logistics – it’s clear the Grammys isn’t going anywhere. When it comes to following the conversations around these awards, Twitter is the place to be.